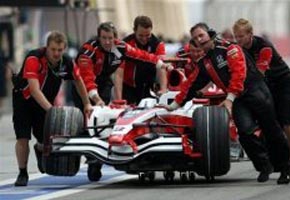 Super Aguri has just hours to pull together a deal or Honda will prevent them racing in this weeks Spanish Grand Prix.According to GMM, Autosport, Planet F-1 and other news sources; Hondaâ€™s Nick Fry says they have provided above and beyond to support Super Aguri but will not fund their Spanish Grand Prix for them.

Unless a deal is inked by Friday practice, Super Aguri will be forced to sit this Grand Prix out. According to GMM, paddock rumor has it that a new Magma deal is close to being completed. Although Super Aguri are not providing details of the deal, they have stated that they are in negotiations and look forward to the race.

It is no secret that Honda have stated they are unwilling to support Super Aguri and it is equally no secret that I am perplexed as the entire team was created for Sato, after being dumped by Honda, and the intent was to have a customer car team similar to Red Bullâ€™s Toro Rosso. Now that customer cars has become the black pariah of the paddock, it seems Honda has no continued interest in Super Aguriâ€™s existence.

You started the team to shuffle Japanese driver Sato and avoid a PR backlash at home by dumping him for Rubens Barrichello. You agreed to supply chassis and motors and now you are not willing to let them run if they donâ€™t ink a deal by Friday? Seems you are creating your own PR backlash again and this time itâ€™s not just letting go of Sato, itâ€™s taking down Japanese hero in Aguri Suzuki and eliminating a much needed team on the grid. I just offer my congratulations to Nick and the 8-ball Committee for making the decision that leaves me cold. I hope the Magma deal can come through and Super Aguri finds the financial backing needed to switch to Toyota, Ferrari or Renault lumps.

F1 needs to fix the…
3 hours ago by Negative Camber
I doubt Charlie wants 16 cars but I believe his ...

F1 needs to fix the…
5 hours ago by charlie
I completely agree with you on this, NC. However, if ...

Button re-joins Williams Racing
10 hours ago by Tom Firth
I think it is a good move to have Jenson ...