There’s a reason why it’s by no means obligatory here to attend the Formula One German Grand Prix. The ADAC 24h Rennen Nürburgring, an entire day and night’s racing around the lengthened stadium edition of the old Nordschleife, is often the best-attended motor sport event in Germany.

The annual race has attracted in excess of 200 starters in the past and this year 169 entrants lined up at 4 p.m. Saturday to seek to survive a day on the Nordschleife – everything from racing exotics through off-the-shelf road cars to some blasts from the past.

This year’s winners, for the first time, were Audi, whose number 3 Phoenix R8 LMS ultra completed 155 laps with just a 3:35.383 advantage over one of its sister R8s. The #3 lineup (Marc Basseng / Christopher Haase / Frank Stippler / Markus Winkelhock) secured the R8’s first win at the 24 hours of the Nürburgring at the fourth attempt. 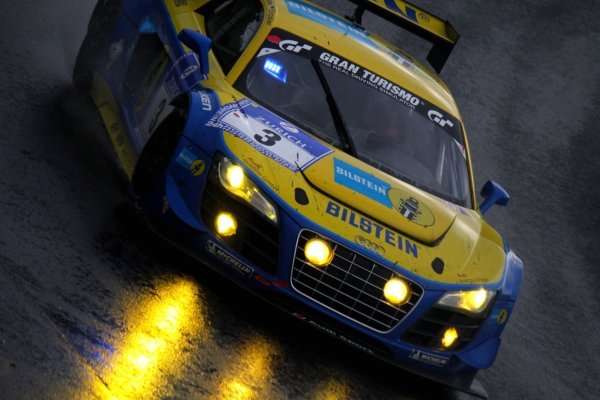 Winkelhock is of course no stranger to leading at the Nürburgring, not even in Formula One. Remember those magical albeit short-lived Spyker moments in the pouring rain from 2007? In any case, the winners equalled the 2009 distance record first set by local matadors Manthey Porsche.

They had to keep up a relentless pace to attain it, surviving some rain at dawn and during the night, while also negotiating traffic of all shapes and sizes.

The Mamerow Racing R8 LMS rolled in second, piloted among others by Christian Abt. That gives it the most spurious F1B connection insofar as Christian is the uncle of Daniel Abt, the GP3 team-mate of one Conor Daly.

An all-German manufacturer podium – by no means rare at this event – was rounded out by Mercedes and their #66 Hankook-Team Heico SLS AMG GT3. 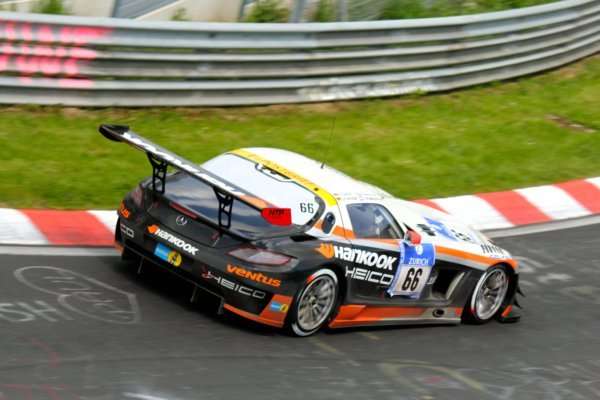 Those of you familiar with this event will surely be asking “where’s Porsche?” and more specifically “where’s Manthey Racing?” The perennial front-runners with their fleet of 911 GT3 R’s looked on course for a podium even after a night-time off in the wet. Their #11 car was holding the Mercedes at bay in third place entering the 155th lap. They were the last two cars to avoid being lapped at least once…

But the Wochenspiegel Manthey ran out of fuel on the start-finish line, and was subsequently speared by another car before the mechanics could recover it. Damaged and unable to complete the full race duration, the car was not classified as a finisher – despite traveling the fourth-furthest in the entire field. A tough nut for the team based just off the Döttinger Höhe straight.

If this is possible, an even more local Porsche outfit was thus forced to fly the flag. The Abbelen team of “Ring Spezialists” (an unfortunate bit of Denglish, there), including Sabine Schmitz, came in sixth overall – though they had sustained some damage of their own early in the event and muddled through.

The other unlucky losers were the BMW Z4 GT3’s of Team Schubert. Both cars suffered a series of problems but took the lead 11 times between them. The pole-sitting #19 lost 52 minutes to a 3 a.m. transmission change when leading. Ultimately they fought back to finish five laps adrift in seventh and eighth overall – not even the best-placed of the BMWs. 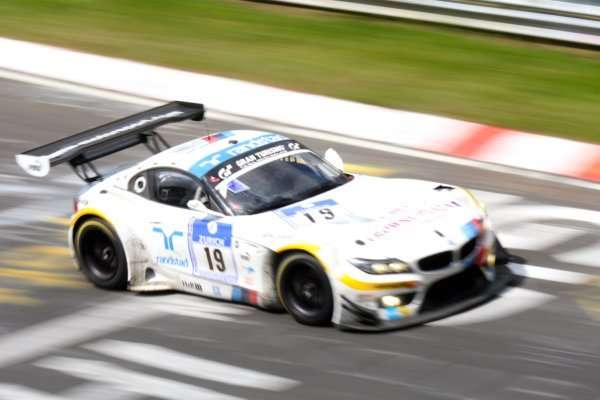 When the rain had cleared on Sunday, their problems fixed, both cars went out and put down qualifying laps in a bid to climb the ranks to their final positions. As well as providing an 8:27.1 and and 8:28.2 (the track’s nearly 16 miles long remember!) respectively and crossing the line side-by-side, the team also left a more subtle hidden message to thank their supporters.

Two more BMWs – including one piloted by F1’s Pedro Lamy, a five-time winner at this prestigious event in the mean time – also occupied the top 10, along with a second Mercedes SLS. The #21 Rowe Racing entrant in 10th finished just five laps adrift of the leaders as well.

The winning Audi might have *only* offered a fastest lap of 8:33.1 in the latter stages, but the local Phoenix racing outfit – who even had Alex Yoong among their broader stable – finally bagged the prize it so nearly grabbed at the first attempt in 2009. The reliability that eluded them then was present this year for the #3, day and night. 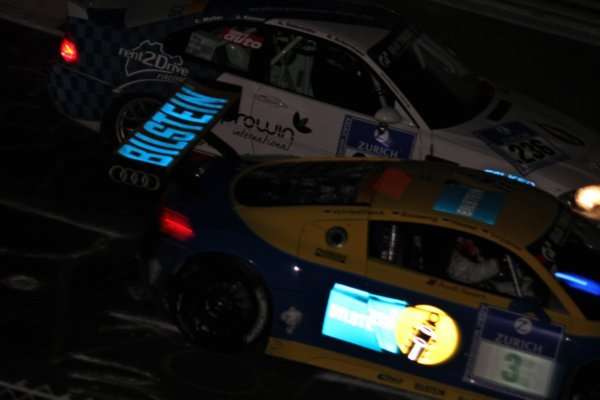 BMW, meanwhile, showed that it’s darn nearly cracked the Z4 at just the second attempt thus putting the Porsche cars very much under the gun for years to come. But the 24 hours of the Nordschleife is perhaps the best evidence of the 911’s legacy on endurance racing, the legions of what some might call “tarted up VW Beetles” will surely be back en masse in 2013.

There’s a second piece pending on the fan’s experience of this amazing race, from which F1 – and I say F1 deliberately – could learn so much. Some exotic cars and familiar drivers at quite simply the most demanding race left on the planet.

To quote five-time winner Marcel Tiemann, also a Le Mans veteran: “From the driver’s perspective I have to say of course 75 corners are better than maybe five straights.”