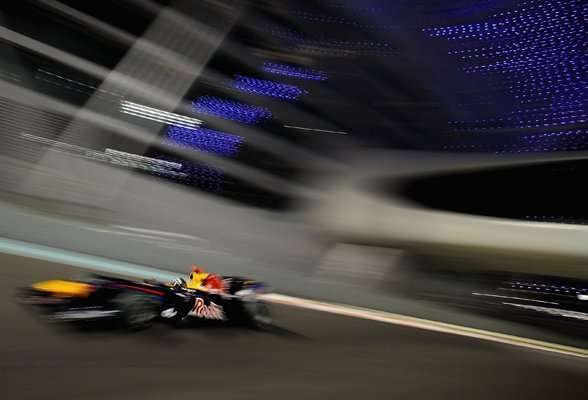 After watching the Friday practice session and the Saturday Qualifying session, it seems I still have a headache. The race in Abu Dhabi is going to be a title decider and if that werenâ€™t exciting enough, the circuit and surrounding areas add to an enormous visual feast of eyeball gluttony. Okayâ€¦we get it.

The thing that threw me off last year was the continuous, brain-hurting pan, tilt and zoom shots from the world feed on every corner. The size of the complex is so galatically massive and visually stunning that the camera operators canâ€™t help themselves from trying to capture that essence in every single shot. I do appreciate the scope of what they face and just how stunning it is but lest we forget, there is a race going folks and a title-deciding one at that!

Enough with the ambiance shots folks; Iâ€™d like to have the normal, tight shots of the cars going through the corners and down the straights. I am trying to watch the attitude of the cars and the driverâ€™s hands. Iâ€™d like suggest the complete opposite notion that has, for years, been perfected by the German camera folks with super close, slow motion shots that show the suspension movement and just about every nuance of the attitude of the car.

Look at it this way, if TV revenue is important and the sponsors are on the cars for a reason, itâ€™d be nice to actually have a camera shot that was close enough to read the sponsors. This penchant for â€œlook what we did!â€ camera shots is teetering on tower of babel-esque notions. Iâ€™d just as soon see Abu Dhabi leave the calendar than to be force fed how inhumanly genius their work is. Spare me; Julius Caesar and the Roman Empire couldnâ€™t conquer the blue sky either folks, Iâ€™ve had these â€œup with Abu Dhabiâ€ images rammed so far up my backside I can taste it. STOP IT! LETâ€S RACE!