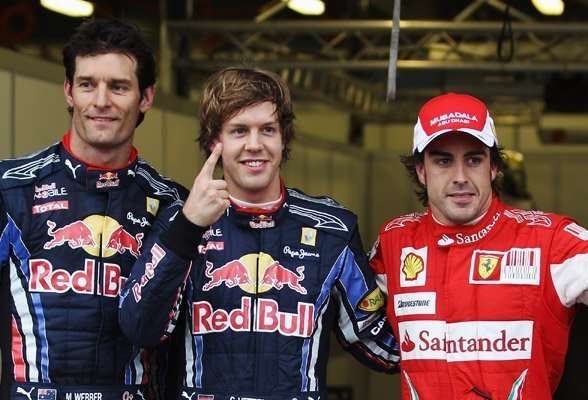 Remember this quote from a few days ago? “Sooner or later, he will be driving a red car.”

The “he” was Sebastian Vettel, and the speaker was Luca di Montezemolo.

Well, it appears some intrepid Spanish journalists tracked down Fernando Alonso during the holidays to get his take on this. Autosport provides the translation:

“I’m not afraid at all of Vettel. Should he come to Ferrari one day it won’t be a problem, I have nothing to say on that.

“But I’m not afraid to face any team-mate, because I’ve never feared them. None of my team-mates have ever done a single point more than I have, so I don’t see why I should be afraid of anyone.”

Well, I hate to break this to Alonso, but he did have a little to say on it. And he sure is lucky that he and Lewis Hamilton came out on even points in 2007, right? But Lewis did end up ranked higher than him, right, when all the various tie-breakers were put into place? So Alonso technically is right, but he would be wrong if he said, “No teammate has ever finished higher than I.”

Thinking a bit sooner in the future, the journalists also asked Alonso about next year’s car:

“I have no doubts that next year I will have the car I want,” he said. “Ferrari has to aim for the title because of the prestige it has always had.”

That’s one of those weird sports star answers, I think. Ferrari will provide him a car capable of winning because it has to aim for the title because of its prestige? That’s strange. No: “I’ve seen the designs, and I’m confident that car will be quick.” No: “I’ve been with out engineers and they are working on a strong design.”

Update: Here’s a link to the Spanish story.