At Spa, bronze is the new gold

I’m guessing that more than a few of you folks have either already been to an F1 race at Spa Francorchamps, or have at least considered doing so (perhaps with varying levels of wistful indulgence, depending on where you live in the world) at some point in time.

I can’t say I blame you. It’s a beautiful circuit, and it usually delivers a classic race – and even living across the border in Germany, it’s the first motor-racing port of call to go onto my calendar every year, regardless of the F1 circus’ annual visit to my country of residence. Spa briefly hosted the “European” Grand Prix, and it was a fitting race to assume that mantle, given that more international fans attend than Belgians each year.

For many, I understand that the pilgrimage could be mighty expensive, but I have one simple money-saving tip to offer – buy a cheap (by F1’s standards, I fear 165 euros – about $210 – for a weekend is cheap) ticket for the “bronze” section of the circuit. Simply ignore those grandstand gold and silver tickets, they’re not worth the extra moulin. OK, you can’t sit on the pit straight or Eau Rouge or the Bus Stop, and that’s sad, but there’s a host of major advantages nonetheless.

First and foremost, you are free to move around – and on F1’s longest and most picturesque circuit, that boon cannot be understated. There are so many unbelievable vantage points available on a bronze ticket that the idea of being stuck in one seat for the entire weekend (no matter how brilliant that seat may be) is – for me at least – a major turn-off. 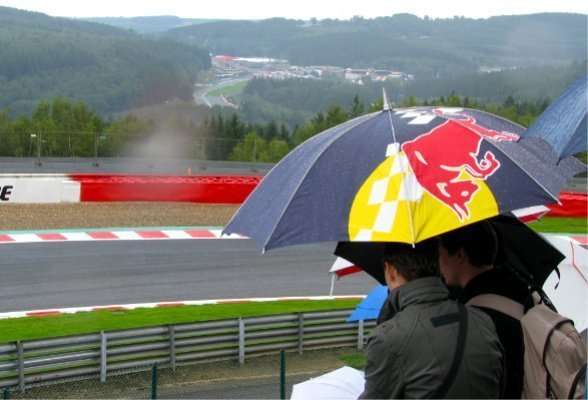 There is a hill on the inside of the corner that offers this wonderful vantage point of the right hand near-hairpin. It’s a photographer’s wet dream, and if the weather’s wet, then it’s a driver’s worst nightmare. Kamui Kobayashi, Nico Hulkenberg, Felipe Massa, and race-leader Lewis Hamilton all came unstuck there this year and the atmosphere during the race was electric, especially when Webber drove around the outside of Massa on lap 2. You can see all the way down the hill to the run into the Bus Stop – a view that highlights Spa’s remarkable topography better that a television camera ever can.

And when the race is over you can make a swift getaway through the forests, which is doubly convenient as you’re also sheltered from the elements amongst the trees. 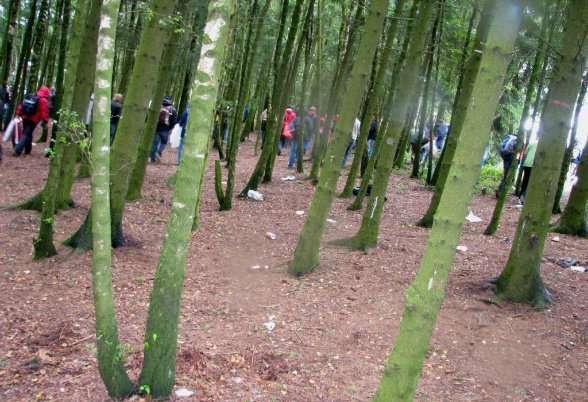 Next up, Pouhon – the double left-hander midway through sector two. It’s a short, but very steep walk away from Rivage, and it’s perhaps the busiest segment of the cattle-class zones on a race weekend. You have a great view of the cars flying around the nameless left hander after Rivage (where Vitaly Petrov lost his Renault in Qualifying) and then charging down the hill into what nowadays is basically a flat-out double-apex left. If memory serves, spectators there were treated to a pirouetting Jarno Trulli late in the race this year. But as with every bronze area on the track, either bring a waterproof jacket, or an umbrella, or both. 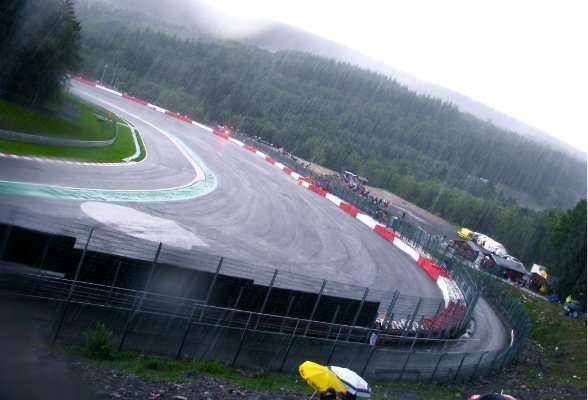 No, really, bring an umbrella. When the weather turns – as it did just before Saturday’s GP3 race this year – it turns at breakneck speed. 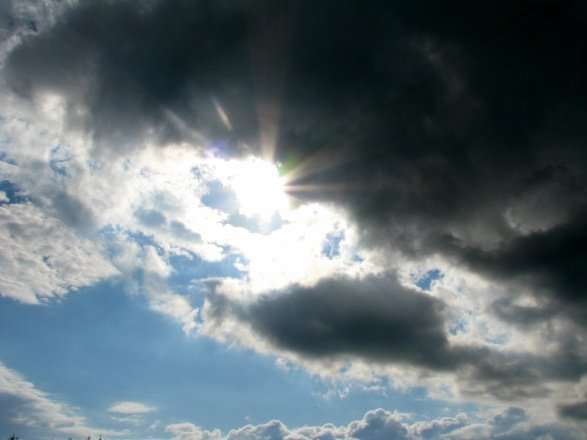 Lest I end up trying your patience with an excessively lengthy post, as usual, I’ll look to wrap this up now. But I have only offered you a couple of views from this amazing circuit. And on the cheap bronze ticket there are many more great vantage points available. There’s Radillon at the top of Eau Rouge (where I sat for the race in 2009), the length of the Kemmel straight, the entry to Les Combes after that, the Les Fagnes (aka Bruxelles) chicane after Pouhon (my chosen spot in 2007 on my first visit to the track), not to mention a bumper section virtually all the way from the exit of Stavelot down through Blanchimont and into the entry of the Bus Stop.

Seriously, you’d have to be barmy to waste an extra 200-ish euros or 300-ish dollars to secure a sardine-in-a-can grandstand seat at one single point on the track. Instead, spend an extra 5 euros on a foam cushion/mud guard to sit on (you’ll need it!), invest in some hardy boots that can cope with a bit of mud, and go slum it with the hardcore, slightly cheapskate fans — you won’t regret it one bit.

*Incidentally, I notice some fans over at F1Fanatic.co.uk writing that they were given seats for Eau Rouge in the exclusive G3 gold section, and ended up deciding to go back to Kemmel after a few minutes in their new high-class home. So, even when money’s no option, it seems some folks out there share my opinion.

**Sorry for not sharing any real on-track action shots, folks. I took hundreds, and I’d love to, but the rules really are so strict and the consequences so severe in these matters that I dare not do so. They shall have to adorn my wall instead. I intentionally chose a selection of pics that could essentially have been taken on any given day at the circuit. (Feel free to accuse me of pathetic cowardice below! And you can always drop me a line at markh@theparcferme.com if you’d like me to privately send you a shot of your favorite driver, I’d be delighted to try to help.)