Motorsport is changing: When the new Audi R18 e-tron quattro is pitted against its competitors in the FIA World Endurance Championship (WEC) the Audi factory drivers have to deliver an additional quality. Not only will they need to master the races in a flawless, fast, reliable and intelligent manner as before, but in a highly efficient one as well. Otherwise, penalties are a possibility.

The new regulations in endurance racing take their toll on those involved. While the Audi Sport engineers were challenged to pay attention to maximum efficiency with every component, the operation of the latest sports car from Ingolstadt and Neckarsulm requires a sensitive touch as well.

“Reproducing lap times with accuracy down to a tenth, has long been a hallmark of professional race drivers such as ours,” says Head of Audi Motorsport Dr. Wolfgang Ullrich. “But in 2014, we’re making even higher demands on our WEC drivers. Lap by lap they have to meet an exact consumption target while continuing to battle for the best position on track. So the fans will continue to see thrilling action in the future.”

Two examples of the new requirements: Only a limited amount of energy per lap may be fed into the car’s powertrain through the hybrid system – 2, 4, 6 or 8 megajoules per lap at Le Mans, depending on the class. If these limits are exceeded, 10-, 40- or even 60-second stop-and-go penalties threaten in the case of repeated violations. The same penalties apply if the permissible amount of fuel per lap is repeatedly exceeded. Likewise, the fuel flow rate and the engine’s boost pressure are checked.

“For drivers and engineers, it’s crucial to understand the complexity of the new rules and to apply this knowledge to racing situations in an optimum manner,” explains Leena Gade, who as a race engineer for Audi won the Le Mans 24 Hours in 2011 and 2012. “This requires a flawless information flow. We’ve got to keep the drivers informed of whether they’re staying within these limits over the radio.” 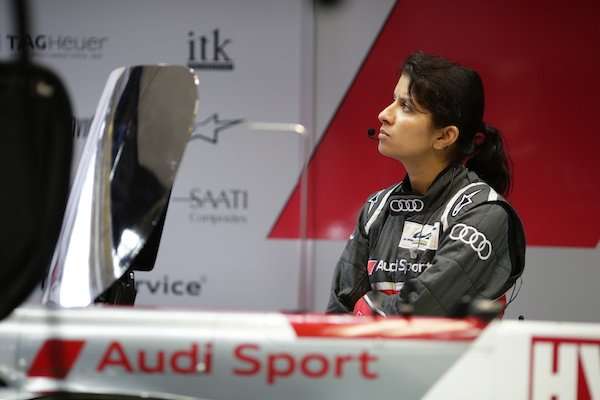 The Audi Sport squad has successfully been testing this. If a driver is slowed by a vehicle heading into a turn, it may be advantageous to initially follow this car to save fuel and to only overtake it exiting the corner. But approaching a turn more gently also has effects on the car’s handling.

“The drivers are no longer putting the tires and suspension under load as systematically as before,” says Leena Gade based on her observations. “That’s why the car’s dynamic response is different.”

To Audi factory driver Lucas di Grassi, who was involved in the tests of the new car at an early stage, the new task poses an intriguing challenge.

“It doesn’t seem like I’d have to fundamentally change my driving style now,” analyzes the Brazilian. “Even in the past there were situations in which we had to watch our fuel consumption in order to put certain race strategies on track. Now we’re driving as fast as possible without ever losing sight of the set consumption limit. And if we do exceed the limit once, then we’ve got two laps to compensate for the excess by reducing our consumption. So here’s another challenge being added to our task list which means we’ve got to be both efficient and fast.”

Do fans have to fear that the race drivers in 2014 will be acting with great restraint in order to save energy?

“Not to worry,” says Lucas di Grassi. “Even though consumption may heavily vary, the lap times are very similar and that’s why we’re running at similar speeds. It’s basically about saving a lot of energy in some sections – for instance by lifting earlier – without driving a lot slower on a whole lap. I’m impressed about how well and precisely Audi Sport has already been handling these tasks and is always able to help us with specific calculations and advice. Our sport will continue to be great fun. It’s just that we’ll be using a lot less energy in it than ever before.”