In a timeline filled with political intrigue over liability, safety and COVID-19, the Australian Grand Prix was eventually canceled. The cancelation occurred just two hours prior to the first Free Practice session on Friday.

I’ve read lots of tweets, opinion pieces and posts regarding the event which many criticisms and harsh words for Formula 1, the FIA, the Australian Grand Prix Corporation (AGPC) and others within the Victorian state and health services.

This wasn’t an easy situation, like all other COVID-19 decisions around the world. Despite the cancellation, many drivers took to social media saying it was the right decision to cancel despite Red Bull, Alpha tour, Racing Point and Mercedes willing to race. Mercedes eventually changed their mind after a call from the board to team boss Toto Wolff. 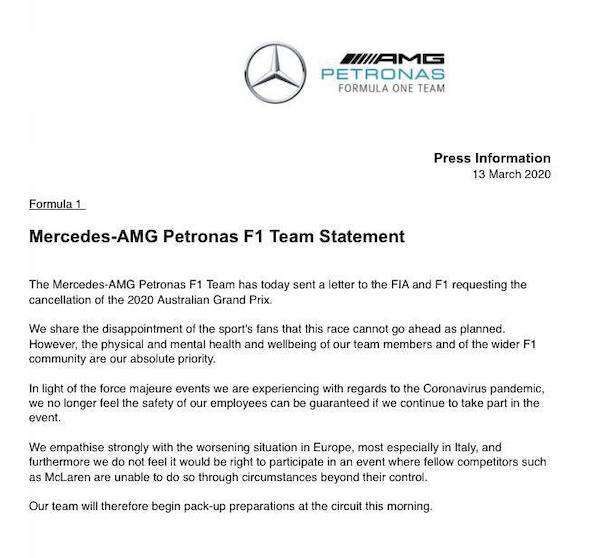 There is a timeline of events over at The Race worth reading that gives you an idea of how this all transpired and why it took so long to call. Ultimately, there were questions as to why it was called off last week but one thing to keep in mind is that F1 has to ship all its gear a couple of weeks or more to the event location and as the severity of COVID-19 is a fluid situation, it was difficult to know just what many of the major sporting events would be deciding three weeks later.

I don’t envy F1, the FIA or the AGPC in this situation but the impact and residue of the situation will leave a residue on the series. It is not known what will happen tot he Bahrain grand prix or when the series will start the season.

Check out the full story by Mark Hughes here.

Pretty new on the scene. Signed an impressive number of knowledgeable journalists though.

So I don’t think F1 should have cancelled a week out, the government advice from Australia didn’t warrant them doing so and last Sunday, Melbourne held around 80,000 fans at the MCG for the cricket which F1 correctly mentioned as justification for why they pushed ahead. A lot changed between last Sunday and what was Thursday night in Australia though, both within F1 and globally within sport following the US administration stepping up its response so ultimately the decision to cancel after McLaren quarantined 14 members of its team was absolutely the right one. I think we’ve still more questions… Read more »