The paddock pundits were chin-stroking about Mercedes seeming quicker in Australia and Ferrari quicker in Bahrain—who would be quickest in China?

Pundits were giving the straight-line speed to Ferrari but reliability concerns were present as well with an electrical issue that cost Charles Leclerc a win in Bahrain. Had Ferrari found the pace at the cost of reliability? All would be revealed in Qualifying for the Chinese Grand Prix. All, that is, except Alex Albon who crashed his Toro Rosso in FP3 to a degree that meant it wouldn’t be re-built in time for qualifying.

If Ferrari were quicker down the straights, then Mercedes had to get them in the corners and rumors emerged that Ferrari could be using a little more downforce on Saturday sacrificing some of the straight-line speed. Regardless, Williams were first out on track for the initial run to 19th or 20th.

The Ferrari’s were out nose-to-tail with Leclerc leading the parade. Eventually Mercedes followed suit. The two Ferrari caught up with both Mercedes and Alfa Romeo’s on their out-laps and it cost Leclerc time. Vettel set the initial top time at 1:33.557s. Mercedes then eclipsed Ferrari with Valtteri Bottas setting a 1:32.658s and his teammate, Lewis Hamilton, .457s off the pace.

The field was close on time and this meant that Leclerc had to come back out again, which they wouldn’t’ want to do as he was using a new set of soft tires. Everyone below Hulkenberg in 5th place came out again for a second run.

Leclerc jumped to 2nd but still wasn’t quicker than the Mercedes of Bottas while McLaren’s Carlos Sainz made a big jump up to 7th and Racing Point’s Lance Stroll was cut.

The teams burned a few minutes off Q2 then came out with just 11:45s left in the session. Both Ferrari’s came out on Medium tires as did the Mercedes. This was the tire choice to start the race on. Max Verstappen was also on the medium while the rest of the field were on Soft tires so could the front runners have enough pace to keep the midfield on soft tires behind them?

Bottas threw down a 1:31.728s and took top spot +0.875 over his teammate, Hamilton, and the Ferrari’s were Vettel and Leclerc in 2nd and 3rd at +0.504s off Bottas. It was the Bottas we saw in Australia. Aggressive and throwing down strong laps while Hamilton struggled with his car.

McLaren seemed to suggest that they may be players for best-of-the-rest in Bahrain but were struggling to get in to Q2 while Renault were clinging to 9th and 10th.

All the cars came out for a second run and both Vettel and Bottas were on the Soft compounds. Lewis jumped up to the top on a set of Medium tires with a 1:31.6s lap. A good recovery from Pierre Gasly who finally managed to jump up to 6th just behind his teammate, Verstappen.

With 10:23s left in session, Mercedes came out on Soft tires as did both Ferraris. It was clear that tire temps and pressures were playing a central role in qualifying. Lewis jumped to top spot but Bottas quickly eclipsed with a 1:31.563 which was just +0.007s faster than Lewis.

With just 2:22s left, Mercedes and Ferrari came out for their final runs. The cars were all bunched up and jockeying for position to get enough room for a clean lap. Lewis was setting purple sectors and Bottas was hot on his tail. Lewis missed pole by 0.023s with Vettel in 3rd and Leclerc in 4th. 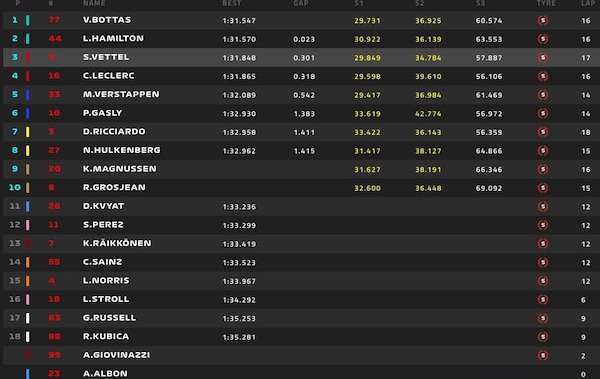 The irony of Max being pissed that others broke an ‘unspoken rule’ is too much.

I found that humorous too. Then K-Mags said seb was right. ;)

the outcome of all this? Bah, humbug, here we go again. The only issue of any real competitive interest is whether it’s Hamilton or Bottas for the rest of the year – and that’s hardly exciting enough. Sure, there will be a Ferrari and a Red Bull victory somewhere… who cares. Read about it here on Monday or Tuesday and save the hours of TV watching.