The championships are won but the battle still continued as Renault blamed Toro Rosso for their engine woes but a press release from Toro Rosso seemed to reply that Renault was possibly hampering the team due to the battle for the constructor’s championship. Tempers were flaring as qualifying began with Red Bull’s Dr. Helmut Marko releasing a statement reiterating the respect they have for Renault. Perhaps it’s best these two are parting ways after one more race.

If that paddock politics weren’t enough, the Sao Paulo crime may have added more treachery as the Mercedes team buss was forced to stop by armed thugs, shots were fired and a gun held to a mechanics head while team valuables were stolen. The FIA team had an altercation as well.

As that was all going on, the initial out lap for Q1 saw even a bigger moment as Lewis Hamilton ended his attempt by crashing at turn 7 and doing serious damage to his car. Something you usually don’t see from Lewis as he generally leaves the pushing of limits to Friday’s practice session to explore the track limits and chassis limits and builds up to Qualifying.

I’m not sure what caused the incident for Lewis but the ride height looked very low on his car and there were sparks coming from underneath mid-corner and I wonder if he got high centered? Just an uneducated guess.

Max Verstappen radioed that there was something wrong with his engine and this left Valtteri Bottas as the sole Mercedes hope of pole in Brazil.

Stroll, Gasly, Wehrlein, Ericsson, Hamilton were all out in Q1.

Initial pace was set by Bottas with Vettel following and Massa set a good lap for 6th. Verstappen and Ricciardo were running in 4th and 5th and didn’t quite seem to have the pace over one lap.

The threat of rain reared its ugly head as well as a cooling track and cold tires. With a 20 degree in ambient temperature drop on Saturday, the teams were scrambling for grip and finding the tire heat cycle and window for performance.

With two minutes left, Nico Hulkenberg was languishing back in 13th while his teammate, Carlos Sainz, was on the bubble in 10th. Toro Rosso’s Brendon Hartley got out of the car having set 15th fastest.

Hulkenberg threw down an 8th place lap with Sainz jumping back up to 10th while Sebastian vettel set the quickest time with a 1:08.494s lap. While Both REnault’s made it into Q3, Force India’s Esteban Ocon failed to advance.

The surprise was the 6th place run for Fernando Alonso in his McLaren.

Hartley, Grosjean, Magnussen, Ocon, Vandoorne were all out in Q2.

With no Lewis to fret over, Ferrari’s duo set about attacking Bottas for pole position. Both Red Bull’s were there or thereabouts with Ricciardo facing a grid penalty. The pressure was on as this is the reason Valtteri gets paid the big bucks, to pick up the mantle when Lewis has an issue. Could he deliver pole for Mercedes?

First run for Bottas on SuperSoft tires produced a 1:08.442s and was fastest in all three sectors. The answer for Ferrari’s Vettel was the fastest in sector one and two and set the fastest time at 1:08.360s.

Massa had a big save on his second run in turn 7 and promptly pitted for another try. The retiring Brazilian was in Q3 for his final race in Brazil and trying hard to improve.

The blue rain lights lit up as it seemed that a light drizzle started as the teams were releasing their cars for the final run in Q3. Force India radioed Perez and said the rain is slightly more as the teams released.

If there was a time for some desk-banging from Mercedes boss toto Wolff, now was the time. Bottas was quicker than Vettel in sector one while Vettel was slightly off and couldn’t improve his time.

Valtteri Bottas managed to pip Vettel by four hundredths of a second for pole position and earned the money he’s paid by picking up the pieces from a challenging weekend and securing pole position. Three pole positions for Mercedes and Bottas is looking good for Sunday’s race.

Alonso will start from 6th after Ricciardo penalty and he was excited about that. 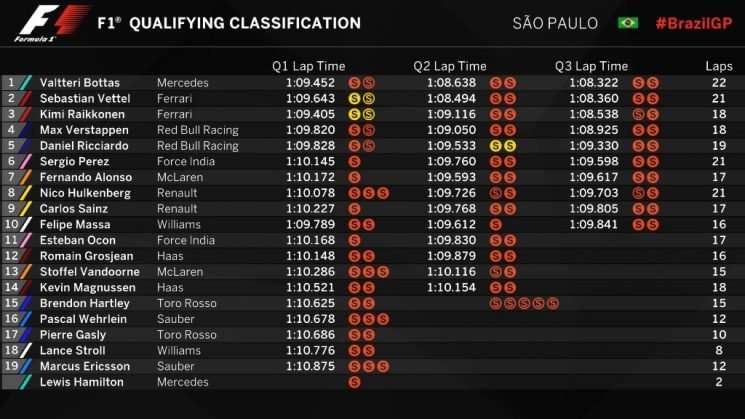 Yes replays showed the car 44 bottoming (sparks coming from underneath) he lost-it when he changes to 5th gear and it was most likely down to driver error.

I noticed that quite a few of the cars were bottoming in that corner, it didn’t look like Hamiltons car was unusual in that. So yeah, probably driver error.

This should make for an entertaining race, Vettel and Bottas have the pride of second in the WDC to fight for. Verstappen just wants to win, Raikkonen might be able to help Vettel. Alonso is far enough up the grid that he could get in amongst the leaders, at the start at least, and Massa is obviously well fired up to do something (win it or bin it) at his last Brazillian GP. Hamilton and Ricciardo making their way through the field should be exciting. And then there will be the excitement of Hartley battling his way up into the… Read more »

After qualifying Max was bragging how good his RB car is at cornering and how much his car (spells engine) was losing out on the straight. The facts shows that those that qualified ahead of him were much better and faster through the twisty sector and so having the better potential/were in better position to carry that all important momentum up the hill and across the finish line. and it should be remembered that this track was supposed to favor his RB car, that is why I said elsewhere that after the Mexican high altitude and turbo abusing by Renault… Read more »