It was cool, sunny weather for Friday and Saturday and not hurricane rolling through so the Formula 1 US Grand Prix was starting off on the right foot for 2019. There were some complications in the form of a very bumpy track and while some drivers complained, others, like Daniel Ricciardo, said it was fine and he liked the character versus a flat track which is like a video game.

As the teams headed into qualifying, it was there or thereabouts for Ferrari, Mercedes and Red Bull’s Max Verstappen. Difficult to know who might have the edge but what we do know is that Lewis Hamilton will secure his 6th title should he finish 8th or better (9th with the fast lap point) on Sunday. But first, Lewis had to qualify.

Sergio Perez enters the session knowing he’d start from the back of the grid for failure to stop for the weigh bridge during practice. Perhaps a harsh penalty but we’ve seen that before this year and perhaps it is something to be reconsidered.

Charles Leclerc was out early because he had an issue during free practice 3 and the team had to work hard to get the car ready so getting some laps in early was important. He jumped to the top fo the timesheet with a 1:34.696s.

With 10:30 left in the session, Alex Albon took his Red Bull to the top of the timesheet but it was Carlos Sainz quickly dislodged him. Alex’s teammate, Max Verstappen, had Alex’s back by kicking Sainz off the top time with a 1:33.549s.

With 9:00 left, the Mercedes set their first laps with Lewis Hamilton topping the timesheet and Valtteri Bottas down in 3rd. Vettel took a second lap and only came 4th quickest. Meanwhile the Racing Point duo of Sergio Perez and Lance Stroll tried hard to stay out of the elimination zone.

The good news was that hometown heroes, Haas F1, made it to Q2. 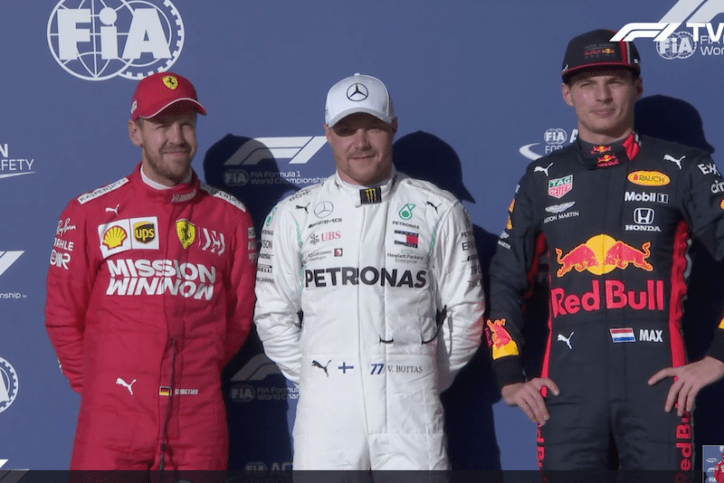 Mercedes, Ferrari and Red Bull were quick out int eh second sessions. Mercedes leading the Ferraris. Lewis set the top time followed by Bottas and Leclerc with Vettel in 4th. It suggested that Leclerc had got his car balanced, sorted and capable of competing which was good news for Ferrari.

Max Verstappen jammed his Red Bull into second but it was his teammate, Alex Albon who jumped everyone with a 1:32.898 on the Soft compounds while Max was on the Mediums. Would Red Bull remain on the Mediums (Verstappen) and Soft (Albon) for the start of the race?

Lance Stroll and both Haas drivers were working hard against the Renault’s to get in to Q3. It was Hulkenberg who pushed Magnussen out but then Ricciardo pushed his teammate, Nico Hulkenberg, out. Gasly used Kvyat out while Leclerc and Vettel took the top time of the session.

The McLaren’s were out early and with Zak Brown saying their cars were best tint eh Soft compounds, they were putting their foot on the neck of best-of-the-rest for the 2019 season. IT can’t be understated what a big jump in performance and the prize money they will gain for their tremendous efforts.

Lewis was first in setting his banker lap setting personal best in sector 1 and sector 2. It was Valtteri Bottas who took top spot over Vettel and Leclerc with Max Verstappen pushing Leclerc back to 4th and Hamilton down to 5th. Valtteri set a track record in the process of cementing his banker lap with a 1:32.029s.

Alex Albon was just ahead of Carlos Sainz and Lando Norris’s McLaren’s for 6th, 7th and 8th respectively. Daniel Ricciardo came out late (3.30 left in session) to make his initial run in the Renault. He split the McLaren’s for 8th quickest.

It was Red Bull out first for their final runs leading the Ferrari’s and both Mercedes cars. Verstappen radioed asking if they weren’t a bit too early coming out. Lewis hasn’t been on pole position since Germany so he was looking for qualifying redemption. 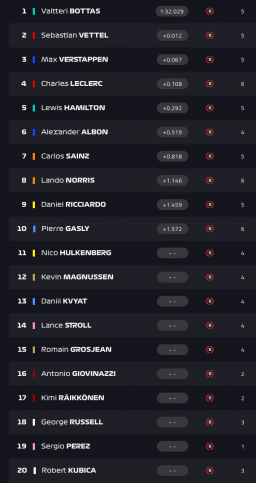