The tire pressures were lowered by 1psi for Saturday and the track temperature was cooler but rising. Could that play a role at all in allowing Ferrari to deliver a fighting chance against Mercedes in qualifying for the Spanish Grand Prix. It’s a track the drivers know well and the track that hosted pre-season testing where many believed Ferrari was the team to beat.

The weekend was given the three hardest compounds Pirelli make for Soft, Medium and Hard tires.

With 17 minutes remaining, Williams F1 were the first team out as Robert Kubica and his new gearbox. This means a grid penalty for Robert but since the team has been slower in qualifying this year than last, it may not matter much.

Nico Hulkenberg ran off in Sector 2 turn 4 but managed to keep the car running and back on track with damaged front wing. He managed to get back into the pit lane while George Russell spun right in front of Nico as he was angling for the pit entrance.

Initial runs left Ferrari at the top with Charles Leclerc leading Sebastian Vettel. That lead was eclipsed by Red Bull’s Max Verstappen who jumped to the top and his teammate, Pierre Gasly sliding into 4th. Could the Honda-powered Red Bulls be a threat in Spain?

Mercedes completed their initial runs with Valtteri Bottas taking the top spot and his teammate, Lewis Hamilton, sliding into 3rd. For Haas F1, the tires have been the biggest struggle they’ve had since impressing everyone in pre-season testing here in Spain. They looked impressive again in Free Practice sessions and Kevin Magnussen quickly jumped up to 6th.

The McLaren’s slotted 11th and 12th with Carlos Sainz complaining of traffic but it was Alfa Romeo and Renault who were in danger of being eliminated. Lando Norris jumped his McLAren up into the top 6 while Kimi Raikkonen threw his Alfa Romeo up to 12th pushing Hulkenberg out and Daniel Ricciardo narrowly making it into Q2. Both Toro Rosso’s into Q3 which was a great result for Daniil Kvyat and Alex Albon.

Mercedes and Ferrari quickly out in Q2 leading the pack and ensuring they had clear track on the red-striped soft tires. Bottas set a 1:16.038s with Hamilton behind him but ahead of Vettel’s Ferrari. Leclerc’s ragged first run meant that Max Verstappen could get his Red Bull between the Ferrari’s in 4th.

With three minutes left, the teams came out for their final runs in Q2. Charles Leclerc came out with 1:30s and was going to have to hustle to get around to the timing line for get one more run in. His mistake on the first run did damage to his car, would that play a role in the balance of qualifying?

Vettel and Verstappen remained in the pits for the session feeling comfortable in 3rd and 4th and saving tires. Daniel Ricciardo managed to claw into Q3 setting 10th place. Dan said on Friday that he thought they could get into Q3 and he was right.

The session began with Mercedes quickly out for their initial runs on red-striped soft tires. Bottas led Hamilton. Then it was the Ferrari of Vettel while Leclerc’s mechanics were all underneath his car checking on the extent of the damage.

Lewis had traffic and a very argumentative rear-end of his car and while he had the top time, it was eclipsed by Bottas and Vettel slotting 3rd behind Hamilton.

Verstappen and Gasly were 4th and 5th fastest ahead of the Haas of Grosjean and Magnussen. Leclerc had still not made his initial run and there was only six minutes left in the session. A tip of the hat to Daniil Kvyat in 8th ahead of the Renault of Daniel Ricciardo.

With five minutes left, Leclerc came out for his first run and there was a lot of gravel on turn 12. He set quick sector times and ran 5th fastest behind Verstappen. There was two minutes left for a final run for Leclerc.

The Mercedes duo came out for their final runs and Vettel overtook Hamilton for track position on his final run. The final runs weren’t seeing any of the top runners besting their initial runs. They finished Bottas, Hamilton and Vettel. Verstappen split the Ferrari with Leclerc in 5th.

Three pole positions in the last three races and .6s ahead of his teammate. The momentum is moving Valterri’s way. 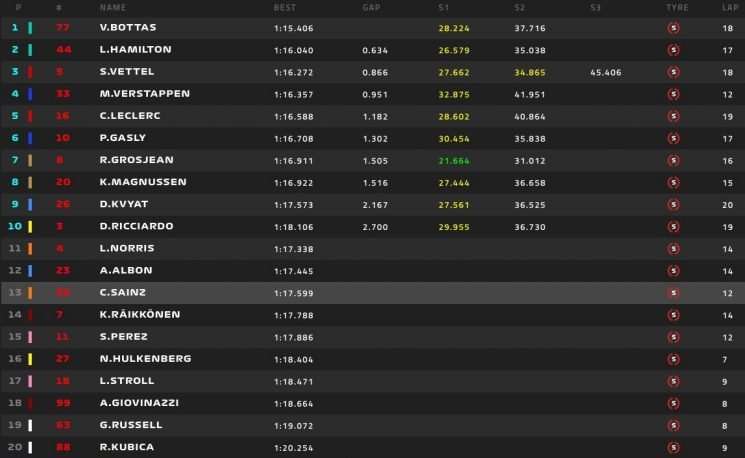 No one said anything about this being a Ferrari track or that they should be fast.

Well I will admit to being wrong. I joked that after fearing Ferrari was brining a new engine they would be .5 secs off the Mercs. Turns out is was .8

I hear-by formally put forward we all (fans AND journalist) just concentrate on the F1-2.0 race. The midfield is tight and waaay more interesting. I would 20X much rather hear about how the battles between Haas, Force India, Renault, and the rest is going than people try to convince me Ferrari or RB has a chance.

Was hoping the new lump would help. LEt’s see how it does in long-run pace. On the other hand, recall this is the track that everyone said Ferrari were clear favorites for 2019 based on their performance here. Either Merc was sandbagging and even fooled the press or something happened to Ferrari in the meantime as well as Merc developed.

While MB is running away with it early, the in team fight between Bottas and Hamilton is brewing. Each season has it’s own feel. I love that Valteri has responded to the criticism and looking forward to Hamilton responding in kind.