The Red Bull Ring is the shortest track on the Formula 1 calendar prompting the lowest lap times but that doesn’t mean it is an easy track. There is a rhythm needed to master the ten turns.

Qualifying was met with a sea of orange, some 20,000 Verstappen fans, all cheering their hero on after a turbo issue halted his Free Practice 3 session. Charles Leclerc entered he session with a gearbox change grid penalty.

Sauber’s Charles Leclerc was out early with Williams. The former needing a good qualifying to overcome a grid penalty and the latter just needing to have any kind of result at all. Mercedes started their initial runs on Ultrasoft tires while Ferrari ran supersofts.

Haas F1 seemed to be the best of the rest during all practice sessions and initial qualifying runs suggested they had a decent chance of continuing that streak running in 6th and 7th.

Nine races this season, Vandoorne has been outqualified by his teammate and he was out in Q1. Lance Stroll managed to get his Williams into Q2 which is a step in the right direction. Once again, Leclerc made it into Q2. Perez stunningly did not make it to Q2 and was joined by Hartley in that disappointing result.

Out in Q1: Vandoorne, PEeez, Sirotkin, Hartley, and Ericsson

Mercedes started initial runs on the Supersoft tires while Leclerc came out on the Ultrasofts needing a good result to mitigate the grid penalty as much as they could. Ferrari came out on Ultrasofts.

Mercs set 103.577s with both Ferrari’s behind them. That’s SS versus the US tires and still 0.190s between them which doesn’t bode well for Ferrari. They’ll need to find more time to go for the first row.

The Haas F1 duo of Romain Grosjean and Kevin Magnussen were still holding their own with initial runs in 6th and 7th and holding off the Renault’s or Hulkenberg and Sainz. Both Renault’s had a new engine mode or “party mode” as Mercedes calls theirs and it didn’t seem to help hoist them above Haas.

With two minutes left, the cars came out for their final runs. Could McLaren’s Alonso or either Renault make their party mode work? Alonso wasn’t able to punch through to Q3 but both Renault’s did even if only as one escaping the fire way down in 9th and 10th. Mercedes switched to the US tires as a precautionary measure. Unfortunately, Esteban Ocon joined his Force India teammate, Sergio Perez, in ending his day by failing to get into Q3.

If Friday practice and the first two session in qualifying were any indicator, we entered !3 with the very real notion that Mercedes had the front row in control. Ferrari were still nearly two tenths off the pace of Merc’s SS shod cars when the Italians used US tires. That wasn’t a good omen but could either Ferrari driver dig deep and find the pace to get on the front row?

The other lingering issue was that they entered the Q3 session with Sebastian Vettel under investigation for impeding Carlos Sainz in Q2. It didn’t prevent Carlos from making Q3 but the bigger question was, could either Renault overhaul either Haas F1 car? The best of the rest was up for the taking.

Hamilton’s first run had a lot of oversteer in turn 3 costing him valuable time. His teammate, Valtteri Bottas, set initial pole position with a 1:03.264s but Lewis and Sebastian both put down scrappy initial laps with Vettel down in 6th. Kimi Raikkonen, however, did slot in third and made an additional run while the others pitted. His late effort out in provisionally on the front row while Romain Grosjean did a stonking lap to slot into 4th.

Both Red Bull cars stayed out as well and Daniel Ricciardo was radioing back to the team that there wasn’t any point of him being out there as he couldn’t go any faster. Max Verstappen and Ricciardo could only manage 5th and 6th behind Grosjean’s 4th place.

With 2:30s left in the session, the cars came out and Ferrari led the field. Raikkonen, Vettel, Bottas and Hamilton all set up for their final run in that order. In the end, the notions were correct with Mercedes locking out the front row as Bottas secured pole position followed by Hamilton.

Max Verstappen jumped to 5th and Ricciardo in 7th separated by the Haas of Romain Grosjean. Carlos Sainz pipped his teammate, Nico Hulkenberg, the bring up the rear of the group in 9th and 10th. Valtteri said the new upgrades made the car feel “so good” and it might be interesting to see how the Finn handles the start on Sunday given that his teammate is right next to him.

A short track, Mercedes advantage and two Haas cars looking very challenging for best of the rest. There could be enough elements to produce and exciting Austrian Grand Prix on Sunday but Saturday had its fireworks when Daniel Ricciardo wasn’t pleased that the team had him punching holes in the air for Max Verstappen and the Australian wasn’t happy about how he was utilized without returning the favor to himself. Team radio would suggest that Max ignored the request to return the favor. Mutli 21, Seb! 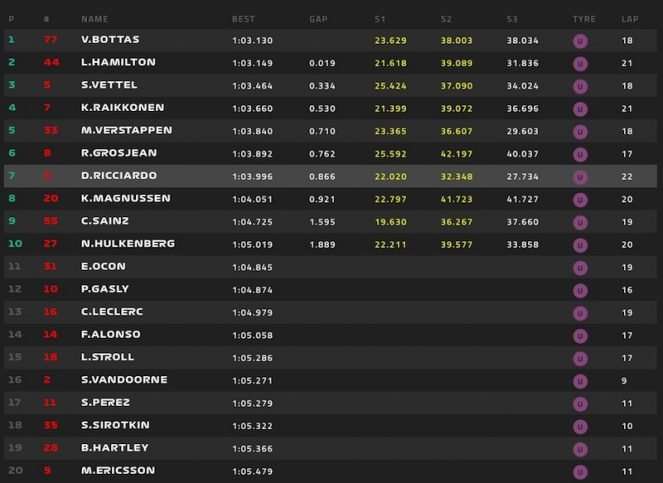 Evil Empire back on top…. Pleased to see Grosjean going fast. I hope he will capitalize on it during the race.

With Haas doing well again, will this bring back the gripe that they are cheating the manufacture rule?

Given how awful the Williams appears to be to drive, Stroll probably deserves a lot of credit for getting into Q2.