Brawn: Equality at Mercedes GP…sort of 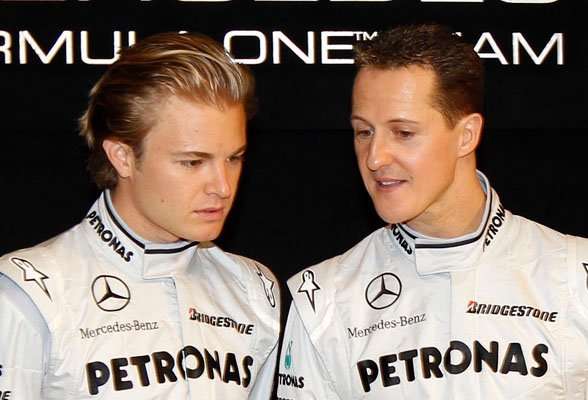 Team boss Ross Brawn says there is no issue on who will be the number one driver at Mercedes GP Petronas in 2010. The short answer? Nobody will be the number one driver. But things get a little more complicated when the inevitable issue of who is faster and who mathematically has a better chance of winning the title. Speaking at the Mercedes GP Petronas launch today, Brawn said:

“It will be absolutely evenly split and I think we demonstrated this past season that we gave both Jenson [Button] and Rubens [Barrichello] absolute equal support.

Now that may come as some comfort to young German Nico Rosberg who was signed to the team prior to the return of his veteran teammate Michael Schumacher. Much has been made of Schumacher’s return to F1 with old friend and boss Ross Brawn.

As F1B’s Mark Hallam pointed out here, Rosberg is certianly maintaining the team is intent on equality.

Many have suggested the end to Rosberg’s career in F1 should he be outperformed by Schumacher while others feel that it is a no-win situation for the young star. If he is beaten, then he isn’t good; if he beats Schumacher then it’s because the veteran is old.

Rosberg has been prodded and poked for a statement on the equality at Mercedes GP and during the launch of their 2010 car livery today, Rosberg said:

“Of course there was a little bit of doubt in me, because Michael has a very good relationship with Ross [Brawn] and all that,”

“But to be very honest recently I had a lot of discussions with Norbert and Ross and I’m very, very confident and comfortable that we will both have the same opportunities, same car, same everything. So that’s fantastic.

“I think it’s in the race philosophy of Mercedes, and the way Ross wants to do it, so that’s the way it’s going to be.”

So how will Rosberg measure up to Schumacher? Rosberg explains:

“First of all I think it’s important to say that we are racing together for Mercedes GP Petronas and it’s also important that we achieve success for the team,” he added. “And then obviously it’s important for me as a driver to beat my team-mate, so definitely it’s going to be a big challenge this year.

“It’s not going to be too easy. But I’m confident that I will be strong this year, so it shouldn’t be a problem. Anyway, for me it’s a fantastic opportunity to have Michael as a team-mate. I look forward to working with him.

“I’m sure we will work well together. Definitely he has a lot of experience so there’s a few things that I will be able to pick up from him.”

Perhaps we can put the concept of team orders behind us but like any good team boss, you have to be flexible with the championship. McLaren may not have official number one driver status but they too know it’s a team sport.

Is Brawn correct in saying there are no team order or number one driver status? Yes, technically speaking but if a driver is faster and in a better position, then you assess that situation in conjunction with the title. Brawn is correct in saying they gave Button and Barrichello an even playing field last year and even that prompted some grousing from certain camps as to better kit, preferential treatment etc. Barrichello even tweeted about it from his Twitter account.

Message to Rosberg? Beat Schumacher and you have nothing to worry about at Mercedes GP. That, alas, is a tall order.