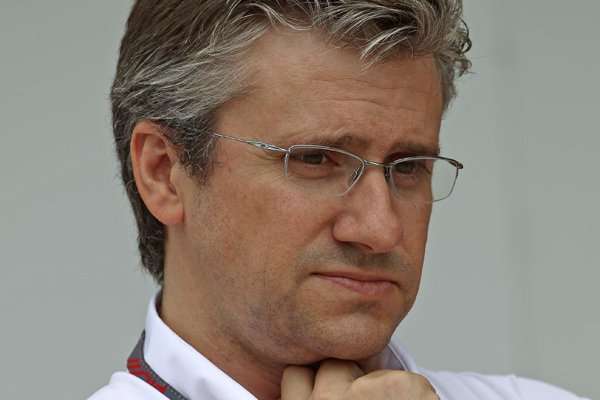 So Stefano Domenicali isn’t going anywhere, but others on the Maranello payroll aren’t so lucky as the team on Tuesday announced various organizational changes.

Most notable: Pat Fry, formerly of McLaren, will be the team’s new “head of race track engineering.” That means the next time Fernando Alonso pits at the wrong time and loses the drivers’ title, it will be Fry’s head that roles.

Maranello, 4th January – It had been hinted at prior to Christmas when, speaking to Italian and international journalists during seasonal festivities, Luca di Montezemolo and Stefano Domenicali talked of not taking any drastic action, but rather making changes aimed at improving the efficiency of the team in its work, both at the track and the factory. Today came the facts.

Joining the Scuderia Ferrari Marlboro is the respected engineer, Neil Martin, who takes on the role of heading up the new Operations Research department. A 38 year old Englishman, Martin previously worked for Red Bull and prior to that McLaren and he will now report directly to Technical Director, Aldo Costa.

At the same time, Costa’s deputy, Pat Fry will, in addition to his current role, take on the job of head of race track engineering. Up until yesterday, this position was held by Chris Dyer and his role within the company will be redefined in the next few days.

I love how dramatic Ferrari works to make this: “Today came the facts.” It’s as if whoever was writing this didn’t have Luca and Stefano looking over his/her shoulder.

Anyone think these changes are enough to get the Scuderia back on track? Keep in mind, we aren’t just talking about mistakes at Abu Dhabi. There have been qualifying errors and that little “Fernando is faster than you” moment for all the world to see.

Race Report: Ocon wins Hungarian…
12 hours ago by zackh900
I think the penalty against Stroll was fair—everyone else on ...