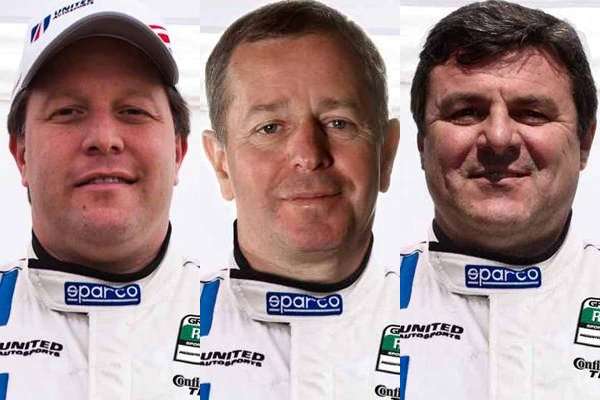 Our good friends over at United Autosports have sent us a note…a very exciting note indeed. Martin Brundle and Mark Blundel will be joining Zak Brown, Chairman & Co-Owner of United Autosports, and fellow American Mark Patterson for the 49th running of the world famous Daytona 24 hour race.

United Autosports have teamed up with Michael Shank Racing in their bid for success with a Ford-Riley prototype car. Blundell finished third in class in the 24 Hours of Spa this year co-driven by United Autosports Co-Owners Brown and Richard Dean (England) plus Eddie Cheever (USA) – Mark’s first race since finishing second in the 2003 Le Mans 24 Hours. Mark said:

“The team and car has huge potential. This aligned with the fact that I will be co-driving with my very close friend, Martin Brundle, to finally fulfill a dream that the pair of us have had to drive the same car as part of the same team, is fantastic. The icing on the cake is that I will also be sharing driving duties with my good friends Mark [Patterson] and of course Zak [Brown].

“My last race in the US was the Sebring 12 Hours in 2003. Before I raced in the CART World Series [1996-2000], oval courses were alien to me coming from Europe although I enjoyed racing on them and won the Marlboro 500 at Fontana. I’ve not raced on a banked/infield combination like I’ll face at Daytona but I’m looking forward to that challenge. I raced with United Autosports in the 24 Hours of Spa last summer and Daytona is another of those very big races that, for whatever reason, I didn’t get a chance to do previously but am very excited to be doing so now.”

Brundle needs little introduction as the BBC’s man on the grid for Formula 1 series coverage. An accomplished racer himself, Martin contested the Le Mans 24 Hours four times (1997-99/01) after his F1 career having won at Le Mans in 1990. Indeed Brundle has made 67 sportscar race starts, including World Sports-Prototype/World Endurance Championships and IMSA events, claiming 34 podiums (including 18 wins) and 11 pole positions. Martin said:

“I’ve raced at the Daytona International Speedway on just two occasions and have been fortunate to win [1988] and finish second [1990] in the 24 Hours. From what I remember about those two races, they were physically the hardest ones of my career. I’m very much looking forward to returning to the Speedway and will no doubt see many old friends to exchange tall stories with.

“Mark [Blundell] and I were team-mates in Formula One at Brabham [1991] and Ligier [1993] but we’ve never actually shared a racecar together. We’ve been close friends since the first time we met on the pit wall at Montreal in 1990 while I’ve known Zak [Brown] through the business of F1 for a number of years and greatly admire his determination and sheer energy. So when the opportunity arose to race at Daytona with these guys, it was an easy decision.

“In recent years I’ve been closely following my son Alex’s motor racing career but I’ve been aching to race again. Now that I’ve cleared my diary of several other obligations, Zak’s invitation to do Daytona was perfectly timed. My last race in North America was an IMSA race when I finished fourth at Del Mar [October, 1991]. Until the official test at Daytona early next month I won’t have driven a Daytona Prototype.”

It will be great to see the four horsemen of United Autosports battle at Daytona and great to see Brundle back in the saddle again. United Autosports only turned its first race in April this year, competing in 17 races in Belgium (twice), China, Czech Republic, England (twice), France, Macau, Portugal and Spain. The Rolex 24 Hours of Daytona therefore marks the first race on “home” soil for the American-owned team. Brown said:

“So now to be racing in my native USA, at the world famous Speedway venue, in North America’s only twice around the clock motor race, makes me extremely proud in what we’ve accomplished in a very short space of time. It’s the first time Richard [Dean] and I have partnered with Michael Shank Racing. His team is first class and he’ll give us everything we need. Richard [Dean] will be ever present on the pit wall with the Michael Shank Racing boys to learn about Grand Am racing while our driver line-up is about as special as it can get.

“My first race at Daytona was in 1997 but I spend a lot of time there nowadays. I have an office in Daytona Beach and my company, Just Marketing International [JMI], has brought in sponsorship from UPS, Crown Royal and DirecTV to Daytona International Speedway. The 24 Hours will be my first ever race in a Daytona Prototype. I tested a Coyote DP earlier this year which was organized by Eddie Cheever, who drove for my team at Spa, and tested a Michael Shank Racing Ford-Riley at Homestead last week (Dec 1) with Mark. I can’t wait for the official test days and then the race week in January!”

Can’t wait to see the team in action at Daytona!