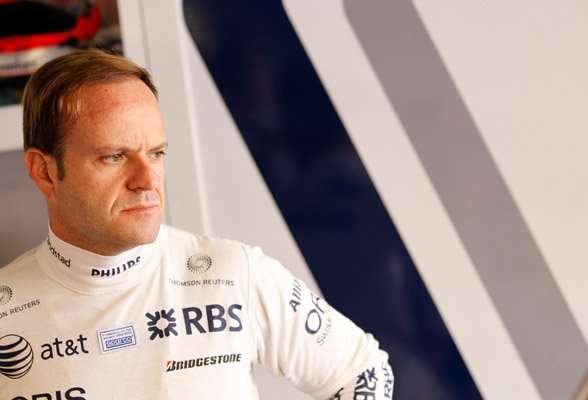 Having said goodbye to 2010, we look now toward the year that is 2011 and wonder what may become of the hard work and optimism all the teams have been displaying over the last several weeks.

In part, I was considering Williams F1 and Rubens Barrichello after reading an interview he did with AUTOSPORT here. The veteran of 307 races, nearly 70 podium finishes, over 650 points and 11 wins, the Brazilian has categorically left his mark on F1 and now attempts the biggest challenge of his career; leaving mark on Williams F1.

With a new teammate in tow, Barrichello looks toward 2011 with hope and determination as evidenced by Messrs. Strang and Cooper’s interview:

“Next year’s car is definitely in aggressive mode” said Barrichello.

So too is Barrichello. He has seized the opportunity by the horns and if I were a betting man, I would say that some of Williams F1’s resurgence last year was due, in fact, to Barrichello providing the seasoned and sage advice only Rubens could provide. You don’t compete in over 300 races and not learn a thing or two about the car and its set up.

Barrichello has his detractors and occasionally I have been left cold by his grousing over the Ferrari years regardless of the Schumacher clause of being number one or not. Rubens seemed to briefly open that Pandora’s box in 2009 when he insinuated, in a moment of toys-from-pram frustration, that Brawn GP may be favoring Jenson Button.

To be honest, Barrichello is better than that. He’s a hell of a driver and certainly number one status…just not at Ferrari or Brawn apparently. The big question is, is he the number one at Williams F1? I have every reason to believe he could be but new teammate Pastor Maldonado is no slouch himself having wont he GP2 championship in 2010 and while many argue it’s his sponsor’s money that got him the ride, one could argue that merit played a large role as well.

If you look between the lines of the AUTOSPORT interview, you begin to see some leadership aggression in Rubens’s statements. You sense he feels his place is solid in the team and that he has not only earned their respect but demands it as well. You get the impression, however, that he knows it may all come down to the new tire supplier, Pirelli, and just how effective the team will be in harnessing its performance:

“The Pirelli tyres could have a fundamental change on the tyres aerodynamically, so whatever happens it will help some teams and it won’t help some others.”

The key, for ma at least, is that no matter how good a driver Barrichello is and how well he helps the team with his feedback, the team ultimately has to come to grips, no pun intended, with the tires. The car has to work. A determined Barrichello is a refreshing sign for the team who has struggled since becoming a definitive name in grand prix racing in the 80’s and 90’s.

It’s a long road ahead but let’s look at it this way:

• Barrichello is a veteran and a fabulous car development driver
• He has the respect and admiration of the team
• He has a new rookie teammate to mentor
• He has just finished a challenging year, coming off the Brawn GP euphoria, but made serious progress toward the seaons end
• He is as passionate about racing today as he ever was and the new team leader statuse has refueled his desire to win on his terms and on his performance
• He is there to win and Williams F1 may just capitalize on his desire and chip in to help claw back a top four position in what would be a real testament to everyone at Williams F1

Ultimately there is an age in F1 when no matter what experience you have, teams cease to be interested. They tend to look for the youth that permeates the grid these days and the hiring of Maldonado has proven that sponsor money can come in very handy. Rubens has a real task ahead of him and winning the championship may be a long shot as time is not his friend and that is exactly what Williams F1 needs at this point. That’s not to say that there could be some clever engineering design or reason the brilliant minds at Williams F1 get it right this year when others don’t. That possibility is always there as brawn GP proved.

I, for one, would love to see it and I have a hunch that Sir Frank Williams and Patrick Head would too. Not to mention that Mark Hallam guy…his love of Williams F1 is well known.