If you’ve been around Formula 1 for any length of time, you’ll be familiar with the Zoom event for charity. I have one of the Zoom photography books replete with images taken by F1 luminaries themselves and its terrific quality and developed for a terrific cause.

The poster depicts Schumacher on his way to victory in the 2000 world championship, his first title with Ferrari and third title overall. The image is inspired by the Art Deco posters of F1’s past and is the tenth in the series, following posters featuring famous drivers and circuits such as Nigel Mansell, Circuit of the Americas, Silverstone and Monaco. 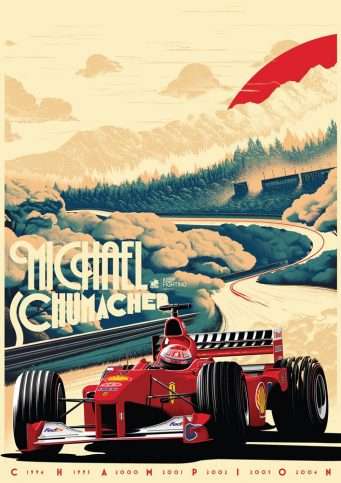 The Keep Fighting Foundation will receive a donation from the sale of each print. The non-profit organization aims to channel the positive energy received by Michael Schumacher and the Schumacher family into a global movement by developing initiatives in the five key areas of culture, education and development, science, public health, and motivation.

The new Champions’ Series posters started with Nigel Mansell and you can find all the posters here as well as some new Champions coming soon. Starting with our man Nige makes perfect sense but what was the impetus for choosing Schumacher? Artist Alex Sylt said:

“Michael Schumacher was a natural choice to feature in a poster as he is so iconic. He is still the most famous name in F1 and the most successful in the sport. Schumacher means a lot to me personally as my family is from Italy and some of my earliest memories of racing were watching him win championship after championship. So it meant a great deal to work with his manager on creating an image which best reflects his success and driving force.

We went through a few different backgrounds before settling on the one which is in the final image. The first ones were of specific moments in races but this didn’t communicate the fact that his success spanned such a long time. The final image may look like Spa but actually it’s a track winding through a traditional German forest to represent Michael’s roots. Getting the green light from Ferrari was an incredible honor and I’ve been thrilled by how much fans like it.

I started the poster series with ones for races as that’s what this Art Deco style is most famous for in F1. My posters are a new take as they show modern F1 cars against Deco backgrounds. This range was expanded to drivers, first with Nigel Mansell and now with Michael Schumacher. They aren’t in any particular order but I have decided to limit them to five posters in a Champions’ Series of legendary F1 drivers. I’m deciding who to showcase next and hope to make a decision early next year.”

“We are delighted to be partnering with ZOOM to raise money for the Keep Fighting Foundation. This is a stunning way to celebrate Michael’s iconic career and by the way a very beautiful poster.”

I love the nod to historic F1 posters and if I had wall space, I would have my entire man cave decked out in F1 race posters. As a Ferrari fan, I am happy to say that my copy of the Zoom / Keep Fighting Foundation poster of Schumacher is on its way and you can get yours right here.