The most touching moment of the Spanish Grand Prix was certainly the crying Kimi fan named Thomas Danel who was reacting to his hero’s early departure from the race. Ferrari was moved, as we all were, by the world feed images of the little guy who was inconsolable over the incident.

The team quickly acted and brought the young man and his parents down to the garage to meet Kimi and what started as one of the worst days of his life turned into one of the better with a signed cap and chat with the 2007 world champion.

New F1 boss, Chase Carey, says this is a good example of the new Formula 1 and that this kind of thing wouldn’t have happened last year under the direction of Bernie Ecclestone. Perhaps Ferrari told him that or maybe he’s just drawn his own conclusion but there’s a part of me that wonders if this isn’t just speculation. How do we know that Bernie wouldn’t have found it a heart-warming moment and allowed Ferrari to do the same? Chase said:

“We got all this press about the little boy who got pulled down, and they did it on their own, having a sense a freedom that they wouldn’t have had a year ago,” he said.

“I didn’t tell them to find the little boy, there are people who did it on their own, thought it would be a special moment, and it was.”

I did receive a message from an FBC follower who had a real zinger when they said that Mr. e once said the sport doesn’t need this young of fan because they don’t buy Rolex watches. It’s a funny point as this has turned out to be one of the more touching moments in F1 empathy in a long while and it involved a little boy who has no need of a Rolex. 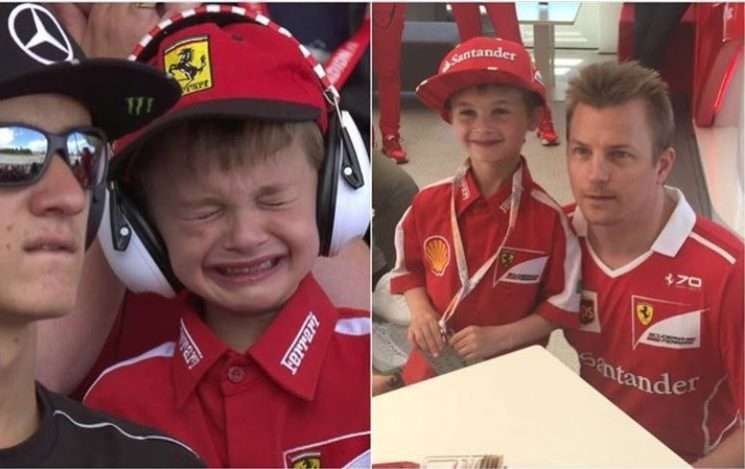 Anyway, I suspect Mr. E found it as endearing as the rest of us and would have allowed it had he still been in charge. He’s shrewd but he’s not heartless.

A big Prosit MR NC for telling it like one sees it/like it looks.

One off. Good one though. One way of getting closer to fans is lowering merchandise cost. But that would mean targeting a larger crowd. You cannot have this kind of regulations to target the average Joe

Gosh, I’m feeling like the Grinch! When they cut to the cute piece with the replay of the distraught kid, then showing him meeting Kimi, I was thinking show us the beeping race!
Mind you I also think that when they do the cuts to the pretty girlfriends, and even team reaction to an event on track.
They have picture in picture functionality – Use it!!!!
Actually, I’m still in Grinch mode, use it to show us in-car laps and racing through the field, and save the cute stuff for the pre and post show.

James Allen seemed to suggest that it was an F1 comms manager that suggested bringing him down and they asked Ferrari to be a part of it. If this is the case then perhaps Chase was referring to the freedom Liberty is giving their people to be reactive?

JA was not the only one that “suggested” that to his followers, also did JS the one that believes that he is the grandee of them all (those that gather for F1 followers) and that 99 percent of the others are small change.
JA was also one of the first that headlined to his followers that VETTEL (car 5) took power unit (ICE) number 3 for Barcelona qualifying. no wonder the amount of “misinformed and confused” F1 followers.

Bernie didn’t have the best public image for this sort of thing, but lets not ignore the significant contribution F1/FOM has made to Great Ormond Street charity and other charities over the past decade or so, particularly with regards the British GP and the access, children from the hospital have been given at Silverstone etc down the years.

Maybe he wouldn’t of given access to a kid in a stand like on Sunday.. quite possibly not but he certainly wasn’t heartless in support of charities and auctions like Zoom and telethon events like Children in Need etc.

On the whole thing though, yes it was a lovely gesture by F1. It was a great news story for F1 from the weekend, but do we really need to do this whole comparative thing of everything chase does, comparing it to what Bernie, may or may not of done? It’s nice we have a new boss in F1, and I know the media wants to highlight the changes between the old F1 management and the new but are some things that it should just be a nice story, and not a comparison to the previous regime choices. Otherwise we… Read more »

Give it rest, Chase.

Cute story but I’m much more concerned with fixing what’s happening on track. Things are neaded in the right direction, hopefully Ross can get us there.

Carey is starting to show his insecurity, kind of worrying.

I think that this whole situation is great. I don’t care that it people are saying that “it woudn’t have happend under Bernie” I will say this “read my lips” the important thing is that it happened. I would also like to say and you can quote me on this “it wouldn’t have happened under Bernie becuase his target market was fat old men that could afford fancy watch’s that cost a godly chunk of an annual salary…. not a child who is happy with kimi coke and icecream”

Ok just one more serve to all those below (just can’t resist it) Your all moaning about what you want…. I would really love to see more of ehat you are wanting. Unfortunately most of what your are wanting is impossible until after 2020 (when the current contracts expire). So lets be very happy with the work arounds around the edges it’s a start and besides I was really happy with a fan that thinks all his prayers have been answered with Kimi, coke and icecream. I would have needed a malt (as in whisky) thrown it….. and none of… Read more »