Monza irritated me because as I sat at the first chicane (a terrible corner and an insult to an F1 circuit) I had great difficulty working out who was driving some of the cars. I peeked hard for the numbers and realized that on most F1 cars the numbers are invisible to the fans. How wrong this is. Numbers help you identify the driver and therefore you connect the dots with what you know and what you are learning and experiencing.

I can hear you now yelling – look at the helmets you halfwit. But I did, and I looked hard at the Mercedes cars and both drivers have yellow helmets. Finally someone told me who was cast as the teams lead driver and his camera shroud on top of the car was yellow – I think? Anyway it was way too complicated to identify the cars. I never did work out who was driving which Torro Rosso. Even the Sahara Force India drivers have similar color helmets. No visible numbers disengages the fans.

In Monza, Hulkenberg suddenly looked as if he was FINALLY driving well this season. The reality is that he has been driving that way all year but the tires in Monza suited his car better. It is really irritating that the mid-field teams do not really know what their outcome might be race to race because no matter how they prepare for a weekend, their final outcome appears to rest with how the tire mystery might work (or not work?) in their favor.

After the Silverstone tire explosion debacle, Pirelli made a change to the rear tire. Instead of a steel belted radial they made a Kevlar belted tire. Critically, this also altered slightly the profile of the rear tire. This in turn altered the airflow around the back of the cars. This in turn altered the effectiveness of the rear diffusers. This in turn altered the amount of efficient downforce a car could make. This in turn altered their qualifying and race positions. Are you still with me? Basically Sahara Force India, who designed their car using the original profile tire dropped on the grid and in race results with the new construction and profile tire, and McLaren and Sauber became more competitive. Hence the comments after Monza that Hulkenberg was “driving well this weekend” when the reality is that it had nothing to do with a better job by the driver. Team managers have a much more difficult job these days when they are expected to draw conclusions on drivers performances and potential. This is NOT good for young drivers trying to break into F1.

Massa was fired right after Monza and replaced by Raikkonen. It really amazes me that some Formula One teams, namely Ferrari, still appear to make emotional decisions when it comes to driver choice. How else can you explain why a driver who was paid millions to go away a few years ago, can now be paid millions to come back? Ferrari literally paid Kimi more than $20M to go away (we don’t think you are right for this team – we don’t think you are good enough for this team?) after he became a world champion in their car. Was letting him go the blunder or is bringing him back the blunder? Why do a few good performances by a driver change a team manager’s mind? Is the Italian emotional temperament still alive and now the controlling force within the critical team decision making? If it is they will not be successful.

Kimi made $23M at Lotus last year. Yes, a full $23M dollars after his two-year sabbatical. Ferrari probably paid somewhere near this figure to get him back. Even though he is not as quick a Roman Grosjean (an interesting argument?), he is considered to be more valuable. I can buy into that he is more valuable at the moment because he is a points scoring, relentless machine in the races. But what is so different today than when they paid him to evaporate away in 2009? Has Ferrari made an emotional decision or an intellectual decision? He is still the same driver that did not fit their system before. He hasn’t changed in his commitment to any team. Who, within Ferrari, thinks that they can change enough to make it work for Kimi this time? Have we just witnessed a great example of irrational behavior? Kimi once again has positioned himself as one of the sports highest earners. As he once famously said to his engineer, “Leave me alone, I know what I am doing”.

So Montoya will return to Indycar with team Penske. This could work well for both. Montoya is (was?) one of the fastest racecar drivers I have ever seen. He was also a great example of someone who carried a built in restriction of not understanding a racecar technically. Therefore when the fine tune adjustments needed to be made he relied on others to provide him with what he needed. When he got it, he was unbeatable. I wrote it in my book, Race to Win, seven years ago that he would never be successful in NASCAR. It was nothing to do with his sheer speed, it was all to do with the fact that the technically astute guys could keep adjusting their cars to suit the changing track conditions and therefore he would get left further and further behind with every pit stop. I’m surprised that Chip Ganassi took seven years to work that out. In short Indycar sprint races, and with teammates controlling the technical direction of the team, this could work well for both and Colombia will take a greater interest in Indycar again.

I donned the helmet once again to race at the superb Goodwood Revival in England the weekend after Monza. I drove a Mercedes 300S in the St. Mary’s Trophy race. There was a host of American Muscle Ford Galaxies from the 60‘s taking on the best Europe had to offer in that period. It was a real ding-dong affair with an Italian Alfa Romeo taking the honors. The American ground pounding monsters however were the stars of the show – what an era that was in Europe back in the sixties when the might of America took on the Europeans in their own back yard. 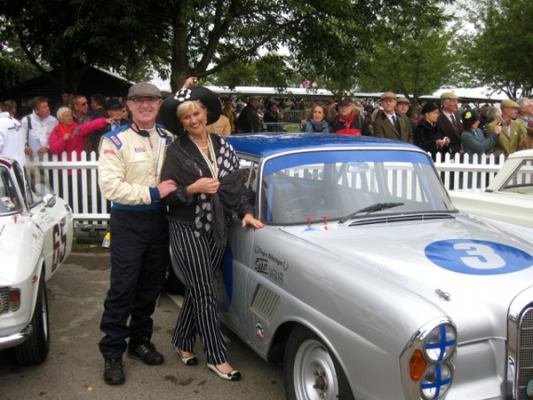 One of the most interesting cars there was the STP turbine four-wheel drive Indy car. It ran in July in the Goodwood Festival Hill climb and stayed over for the revival. People flocked to see it when it fired up in the paddock. Kids pushed and shoved at the adults to get a closer look at a jet that would fly along the ground. Even Adrian Newey stood amazed as he snapped photos of one of the most unique designs of Indy car. He said to me that he wished he was around during that design freedom time – can you imagine what his mind could have conceived?

The noise, the spectacle and the hero’s (past and present) bring record crowds to Goodwood each year. As I stood in the paddock and admired the early sixties recreation, I just wondered what it might have been like in Indy in the early sixties. Perhaps it can be recreated again? I doubt I would buy a ticket to see a road race at the Indianapolis Motor Speedway in May but I would definitely buy a ticket to see a historic recreation race. Why would I do that? Because I would be like the kids in Goodwood. I’d push my way to the front to see and hear the Novi’s (particularly hear them). I’d be fascinated by the different designs that competed at Indy back in its hay day. Indy is sacred ground. Maybe they can keep it sacred by dropping the road race idea and replace it with a historic event that is well planned and executed. Can you imaging looking around and not seeing a car in the car park newer than 1960? I think a lot of people might turn up to see and hear displays like the Novi noise and Granatelli overalls and cars