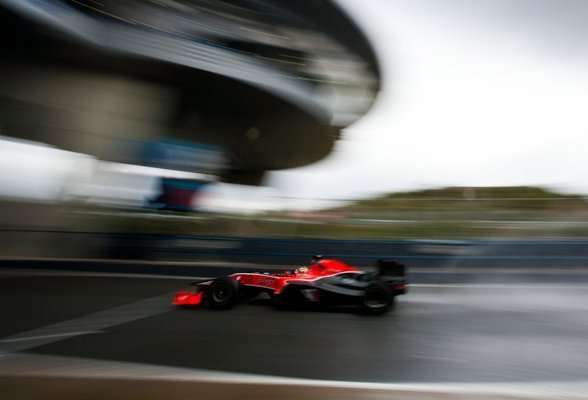 Belgian Jerome D’Ambrosio was announced as Timo Glock’s new teammate at Marussia Virgin Racing today. Yes, for those who missed it, Virgin Racing’s title sponsor is Russian sportscar car maker Marussia. The former Renault test driver spent some time wiht Virgin in Abu Dhabi’s test session and is looking forward to the opportunity to bring the Belgian flag back to F1:

“I’m thrilled to have achieved my goal of a Formula One race seat,” D’Ambrosio said.

“When I came to the team in September this year it was everything I could hope for.

“I had a tough test to complete because there was a lot of competition for this seat, but at the same time I got on well with the team and felt that I had found my home.”

It seems Lucas di Grassi was not part of Virgin’s plans for the future and I am not sure I can blame them. Timo is your solid development and performance driver while the second seat needs to find a young talent to develop and di Grassi, contrary to Speed TV’s Will Buxton’s praise, left very little impression in 2010. Nothing against Will, I am sure Lucas is a terrific guy personally but Virgin isn’t looking for terrific guys.

Other young drivers in difficult cars made a better impression such as Kamui Kobayashi, Nico Hulkenberg and Vitaly Petrov. Glock himself put in a few impressive drives in a car that had no business impressing anyone. Jerome D’Ambrosio should represent a new focus for the future and the team have had their eye on him since the GP2 days and let’s be honest, I assume there is sponsor backing that has a tendency to open eyes further but I am guessing on that. Team boss John Booth said:

“We had followed his progress in GP2 closely and it was clear he was `one to watch’, but when we put him in the car for the four race weekends and the Abu Dhabi test he surpassed even our own expectations,”.

“He slotted into the team perfectly and everyone took a shine to him, including our partners and the media,”

“He has secured this seat absolutely on merit and I think coupled with Timo we have the perfect blend of youth, experience, speed and potential and we can’t wait to see what they can achieve together next season.”

What do you think? Good choice? Should they have given Lucas another year to develop?