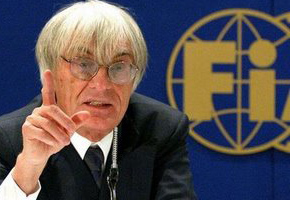 In an extraordinary meeting of their own, Bernie Ecclestone and current Formula 1 teams met this weekend to discuss signing a letter calling for the immediate resignation of current FIA President Max Mosley. Max Mosley’s recent sex scandal, allegedly with Nazi themes and sadomasochism, has created a firestorm of criticism as well as support for the beleaguered President.The FIA have called a June 3 meeting to initiate a vote of confidence but many believe this date too far away. Several member organizations of the FIA have called for Mosley’s resignation and the American AAA is even suggesting creating a new organization that would be in direct competition to the FIA.

It is rumored, via the Daily Mail, that Williams F1, Ferrari and Toro Rosso formed a splinter group refusing to sign the document leaving Mr. Ecclestone angered and walking out of the meeting. Obviously Mr. Ecclestone is fully aware of the damage this issue can or is doing to the Formula 1 empire he has so meticulously built over the last 25 years. As a friend and colleague of Mr. Mosleyâ€™s for over 40 years, I cannot imagine Mr. Ecclestone is pleased to be faced with the decision he has apparently made. The same dup that orchestrated what I consider one of the biggest coupâ€™s in motor sport history are now at opposite ends of the table from each other. Formula 1 has been a vehicle of immeasurable wealth for both Messrs. Ecclestone and Mosley and yet it must be a source of immense pain for both men both publicly and privately.

From my view, Mr. Ecclestone will set Max adrift for the betterment of Formula 1 and himself. He is protecting his creation against the momentary lapse of reason his friend has so obviously displayed and while friendship is important, Bernie has a series to protect that includes the lives and well-being a thousands. Although it pains me to say this; I applaud Mr. Ecclestone for his tenacity in taking things into his own hands and doing what is best for Formula 1. Mr. Mosley needs to resign and it just may take Mr. Ecclestone, national clubs threats and a possible competing organization to overcome Mr. Mosley, Ferrari, Williams, Toro Rosso and a handful of faithful supporters clinging to their long-running association with Mr. Mosley.

It wouldnâ€™t be F1 without the drama. I wonder what Enzo would think of his teams actions?

TPF Podcast Mailbag
13 hours ago by PG
This question for Paul requires some set-up. Watching the F1 ...

TPF Podcast Mailbag
23 hours ago by Timothy Stone
Thanks Negative Camber and The International! i appreciate you discussing ...

Race Report: Verstappen wins Imola…
2 days ago by Negative Camber
indeed. he did not hit the wall :)