Editor’s Note: Not everyone comes to love Formula 1 through their fathers, but I will say that many of the fans I’ve spoken to did, and I was one of them. There is a very special bond between a father and son and often times it can be associated with a shared love of a sport.

Ron reached out to me and wondered if he could write a piece for the website discussing his trip to the Canadian Grand Prix with his son, Kurt. As a reader and listener of the website, I said I would be happy to take a look at his story. As I read his story, I was reminded of the challenges my father faced before he passed away and how we would watch the races together as he was immobile.

My father and I were fans of Ferrari and Schumacher and as it would turn out, my father had also suffered brain trauma from an aneurism or bleeding in the brain like Schumacher would eventually suffer from. I’ve been where the Schumacher’s are and I understand the pain all too well.

On April 23, 2006, I sat at his side while he was in a coma and watched the San Marino Grand Prix. Michael had a tough 2005 so the victory that day was delightful. I leaned over, squeezed my father’s hand and told him that Michael had won and it was then that my father passed. He watched his last race with me.

What I wouldn’t give to watch just one more race with my father. For that reason, I wanted to post Ron’s story because I believe there are some of you who share this bond and if Ron and I can say anything, it is never miss the opportunity. You have no idea how many opportunities are left.

I began watching Formula 1 in 1978, when Gilles Villeneuve started racing for Ferrari.  I have missed ONE RACE since then – my VCR didn’t record the 1994 German Grand Prix (Verstappen fire) due to a power failure.  Naturally I got my eldest son Kurt to watch with me, as soon as he was able.

These days I am partially disabled; being unable to walk long distances or stand for even short lengths of time.  So when Kurt announced that he was buying tickets for this year’s Canadian Grand Prix, I had to tell him that I just can’t handle the walking – my wife Petra was going to have to accompany him instead.  However in the last few days before the race, Petra pleaded with me that “It’s not about the race – it’s about the time spent together with Kurt that mattered!”  She stressed that even if we don’t even go to the race – if we only just watch it on TV from the hotel – that it’s the opportunity of spending time with my son that I’d be missing out on.  Like always, Petra knows best!

So there we were, Ron and Kurt are off to Montreal …. wait … where are we going to stay?  Apparently Kurt had made reservations … but only for Friday night!  I guess we’re sleeping in the car on Saturday I thought!  Fortunately I was able to find an AirBNB single room close to downtown for Saturday night.  Sharing a queen sized bed with Kurt sounded much better than sleeping in the car!

So we leave Toronto at 8:00 P.M. Friday night and 5 ½ hrs. later we arrive at the hotel.  Up-and-at-em Saturday morning, we are in the metro (subway in Toronto speak) by 10:30 and a stranger kindly gives me a very appreciated seat.  We arrive at the track and into the crowd we go!  I had already known to expect long, slow-moving throngs of people, as I had been there in 2004 to watch my hero Michael Schumacher, win the last Canadian GP for Ferrari.

Eventually we made it onto Ile Notre-Dame, having passed through security, ticket taking and across the bridge over the St. Lawrence river, one step at a time, in the very crowded lineup!  This is a task I will have to accomplish 4 times this weekend – thank God for my pain medication!  Fortunately I was able to convince security of my handicap and we were at least able to cut through a shortcut, avoiding 50 yards of walking and 2 sets of double staircases.  Thankfully I would do this to-and-fro, both days.

After the support races of Ferrari’s and Porsche Super Cup cars, qualifying begins.  We had quickly made friends with some guys next to us from Toronto, who were also Ferrari fans.  All of us were overjoyed to see Vettel take pole position!  We celebrated over some beer, which we were legally able to bring to the race.  You see – this would never be allowed in Ontario, where they would force you to buy their overpriced suds!  Gotta love Quebec – sometimes!

After qualifying, Kurt and I decided to let the crowds thin out and found a spot in the shade to relax for a bit.  It was there that we met some other really nice guys.  They were from Montreal and gave us a great tip on a reasonably priced restaurant for dinner that night.  We spent a bit more time by the track, checking-out the expensive wares for sale at the F1 shop and then it was time for the long trek back to the metro station and back to the hotel to pick-up the car.

The next stop was the AirBNB, which we soon discovered was an apartment over a 24hr. massage parlor!  We got settled and then set-out again, back downtown and enjoyed a fabulous dinner thanks to the tip from our new buddies.

The next day it was back to the track for the race.  This time, the crowd was much heavier and slower.  But I grinned and bared it and we got there in good time for the race.  Our fellow Ferrari fan buddies arrived, just as Jacque took to the track in his father Gilles 1978 race winning car.

Why is it that when you are there in person, the race seems to end as soon as it’s begun?  We were all thrilled to see Vettel take the checkered flag and had no idea that it was waved a lap early.  The boys all wanted to go down and walk on the track and I reluctantly agreed.  That quickly turned into “let’s walk down to the hairpin” (we were sitting at the turn 8/9 chicane).  I told them that we still have to make it all the way back to the metro and I didn’t want to do much extra walking.  So down to the hairpin we go, taking a few “Ron rest stops” as we went.  Then it was “let’s keep going” – these kids were killing me!  Finally I said enough is enough – I couldn’t go any further and feared not being able to get home.  It was then that one of my new pals Andrew flagged down an F1 track worker and talked him into giving Kurt and I a lift.  This was strictly forbidden and he was risking his job in doing so, but It was a life saver!  We drove along the track picking up cable from various locations.  When we got to the “Wall of Champions” he told us he couldn’t drive us any further- that we had to get out and he would come back.  This gave us the perfect photo-op at the wall!  He soon returned and drove us back to the exit.  Thanks so much “F1 Guy from Australia”! 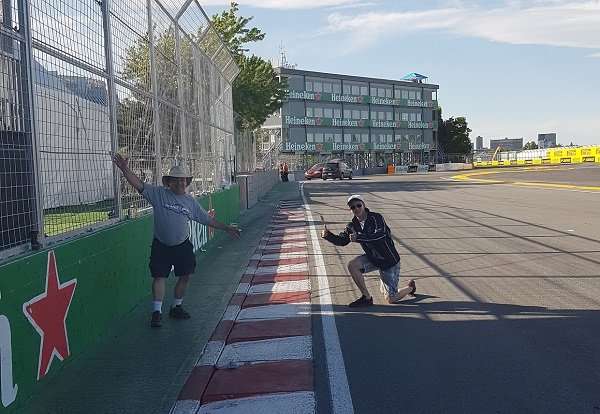 For the final time, we began the long trek back to the metro.   Soon I was unable to go any further and needed to rest.  Security let us outside of the fence which corals the crowd into a narrow stream and I was able to sit for a few minutes.  They then thankfully let us walk outside of the fence, allowing me to move at my own pace and stop when required.  This actually let us move much quicker than the crowd and we were back to the metro much faster than the hordes!

On the way home, back into Ontario, we stopped for much needed coffee and gas at a highway “En Route” gas station.  Kurt went in to buy us some “Tim Horton’s” coffee when lo and behold, there was Andrew, our new friend from the seats next to us at the race!  What a coincidence! We had a good laugh and then it was the long drive back home.  What an awesome trip it had been, with life-long memories for Kurt and I.  Thank-you to all the Quebecers that gave me seats on the subway, security for giving me a helping hand to get through the crowds and “F1 Guy from Australia” for the ride!  AND Thank-you Petra for giving me the push that I needed to realize that despite the pain, I can get out and do these things that I thought were no longer possible!

Loved the article, thanks for posting it. A little addition and reminder. I grew up with 3 sisters, no brothers. The best way to get time with my Dad was to share his passion for all thing mechanical. I grew up watching Jim Clarke, Graham Hill and many others race. Today that passion continues and I am sad that my Dad is no longer around to watch the races with me. Girls rock too!

Indeed. I have two daughters. They could both pick out the drivers on the grid and my youngest shares a birthday with Schumacher so she could always find Michael when she was just a toddler. My oldest would draw all of the logos for car companies and teams.

Thanks for sharing your story, Ron.