Race car drivers sometimes fancy themselves as musicians, picking up the odd guitar, such as the likes of Damon Hill or Kenny Brack have been wont to do. Sometimes they may come in the form of a classically trained, Roman pianist called Elio de Angelis. Even a team owner, Eddie Jordan for example, might consider himself a semi-pro drummer of sorts.

On the opposite end of this funky formula are musicians who, when they find nothing better to do with their hard earned millions, get behind the wheel to try their calloused fingers at something new. One would be hard pressed to find any of them with any real form of success on the track, however. Christopher Cross went toodling about in the American Racing Series (later Indy Lights) and Andrew Ridgeley tried his hand at F3 after the demise of Wham (sniffle), but both second careers were short lived and rather uneventful.

But there are also the dual musical and racing careers of Swedish drummer Tommy â€œSlimâ€ Borgudd. As a musician, recording studio sessions with the biggest group in the world cannot do much harm to oneâ€™s CV. Scoring a World Championship point in only your second Grand Prix whilst driving for a serious backmarker must also count for something (one point?).

Karl Edward Tommy Borgudd was born in 1946 in Borghol near Kalmar on the small Swedish island of Oland. At fourteen years old, he was already playing in his first band; the blues rock influenced Lee Riders Group. Following a handful of singles, the band would break up in â€™68 and Tommy would then help to form a jazz rock fusion group called Made in Sweden. Several albums later, this band would splinter off into Solar Plexus, which would also record a few albums before punk and disco would all but kill off their genre of progressive rock in the mid â€˜70s.

On an early tour of the States, Tommy and his band were in a New Orleans nightclub to see one of their influences, the Willie Dixon Band. When it was announced that the headliners would not be able to play due to their drummer, â€œMemphis Slimâ€, being suddenly ill, Tommyâ€™s friends pushed him onstage. He sat in with his idols and was dutifully nicknamed â€œLittle Slimâ€.

The racing bug, meanwhile, first bit Slim when he saw Stirling Moss in an F2 race at Karlskoga in 1959. Shortly thereafter, Slim met British dixieland musician Chris Barber, an avid racer himself, from whom Borgudd bought a Formula Ford Lotus 22. He took part in a few Swedish club events before attending the Jim Russell Racing School at Snetterton. He then won the next two races that he took part in.

The 1970s were spent in a myriad of cars and formulae. He bought an ex-Ronnie Peterson Focus sportscar, entering five races and winning them all. He won Swedish and Scandinavian championships in saloon cars and Formula Ford 1600, as well as taking part in local and European F3 rounds, finishing 3rd in the â€™79 European championship behind winner Alain Prost. 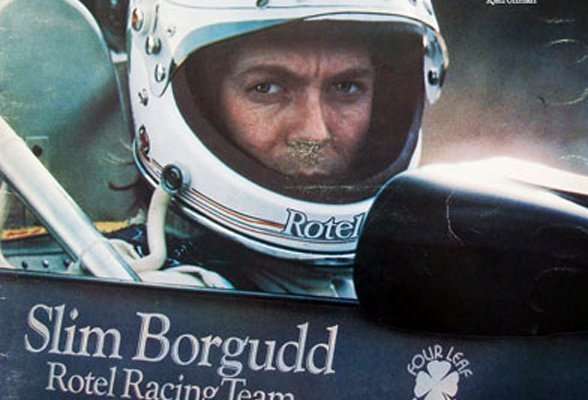 1980 would promise sponsorship from Marlboro for F2, but the money would never come, leaving Slim without a ride for the season. He would borrow a car from a fellow competitor for the Monaco F3 race and, from a 16th starting spot, fight his way up to 3rd before contact with another car would loosen his own bodywork. Rather than retiring, Borgudd would complete the last several laps with one hand on the steering wheel and the other holding the bodywork onto the car. Though it would cause him to drop down the finishing order to 10th, the drive would get the attention of several F1 team owners, including Colin Chapman and Ken Tyrrell.

During these years, Slim had continued playing with his own bands and recording a solo album titled “Funky Formula”, as well as doing studio work with other artists. Early on, he had played with a group called the Hootenanny Singers, led by guitarist Bjorn Ulvaeus. When Bjorn would later go on to form ABBA with Benny Andersson, he would call upon his old friend Slim to help with some studio recordings.

In 1981, at the age of 34, Borgudd would finally get an opportunity in Formula One with the struggling ATS team at the San Marino Grand Prix. Bjorn lent the ABBA name, but no sponsorship dollars, to the ATS sidepods in an attempt to attract other investors to the cash strapped team. While his experienced teammate, Jan Lammers, failed to qualify, Slim started 24th and finished 13th on his GP debut. Team owner Gunter Schmid duly kicked Lammers out of the team and ran a single car with Slim for the remainder of the season. 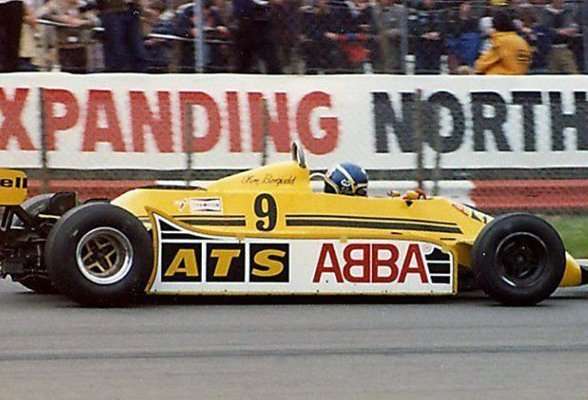 Borgudd himself failed to qualify for the next four races before squeaking into a 21st grid spot at Silverstone. Following a race of high attrition, Slim would go on to finish sixth, earning his first and only WDC point. In the remaining six races of the season, he would only finish one more event, a respectable 10th in the Dutch GP.

Ken Tyrrell could not help notice that Borgudd had outqualified his own driver, Michele Alboretto, during the last half of â€™81, so he signed the Swede to partner the Italian for the following year. But as Alboretto would perform well over the season, in fact going on to win the last race of the year, Slim would be out after just three GPs, having been well off his teammateâ€™s pace and with no sponsorship money to keep his seat secure. And with that, his short F1 career was over.

The coming years would see Slim return to tin tops in both the European Touring Cars and BTCC and even F3 at Macau, but he would make his name with multiple class championships in the European Truck Racing Cup. Musically, Borgudd may not have had the same level of success as other artists who have tried their hand at racing, but how many of those musicians can claim multiple championships in such a variety of machinery as the Swede they call Slim?