And I now quote the 1992 Brabham team driver, who said “Sometimes when I cried, he came near me and caressed my head softly.” Er…I’m sorry…say what?

Giovanna Amati could be accused of many things, but making her way into Formula One on merit is not one of them. Was she ridiculously wealthy? Sure, but how else do most less-than-talented drivers get their foot in the Grand Prix door? Was she considerably more on the physically attractive side than, say, Alain Prost? I’ll take one for the ‘guy team’ and go with the affirmative on that one, too. 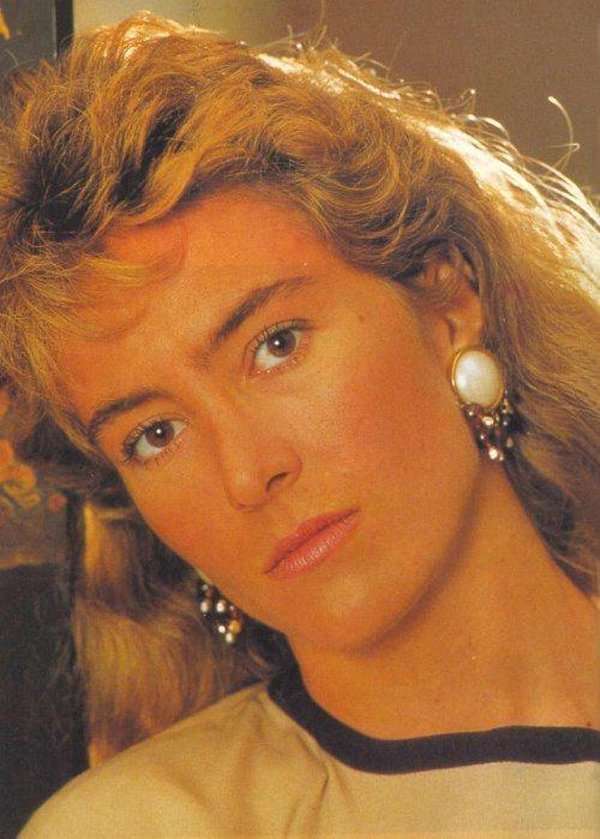 At the age of 19, Giovanna began racing in the Formula Abarth series, winning several races over four years. She then moved up the latter to Italian F3 for 1985 and 1986, again winning a handful of races. For the next year, she took the logical next step to Formula 3000 and the winning stopped. Not only did the victories no longer come, but over a five year period in European, Japanese and International F3000, the highest Amati would finish would be 7th.

But seriously, who needs to be successful to move up the racing ladder when you’re romantically involved (nudge nudge, wink wink) with a Grand Prix team owner? Giovanna therefore got her first F1 test by running thirty short laps in a 1991 Benetton. And as no one has ever questioned Flavio Briatore’s morals, this test must have surely been due to Amati’s outright speed (nudge nudge, wink wink).

Coming into 1992, the once mighty Brabham were struggling mightily. They had been hoping to sign Japanese F3000 champion Akihiko Makaya, a pilot who could bring both talent and cash to the team. However, the FIA would not recognize the Nippon series as a proper feeder for F1 and would therefore not grant Makaya a superlicense. Somehow, Amati qualified for one and so she brought her official pass, her helmet and a check to Kyalami for the first race of 1992.

Being only the 5th woman to ever attempt F1, Giovanna was being pulled between photographers, the press and the team, who were still trying to make a seat for her, so late was the deal made. She would be teamed up with Belgian Eric van de Poele, who, with Modena the previous season, had a total of one GP under his belt, having failed to qualify for the other fifteen races.

Nigel Mansell’s pole time for the 1992 season opening South African GP was 1:15.486. Amati’s best time in the year old Brabham would be 1:24.405. She was almost nine seconds off of pole and nearly four behind her teammate. Amati would not qualify. Van de Pole would start 26th and finish 13th. Up next was Mexico and she was once again nine seconds off Mansell’s pole and three short of her teammate. For the first time in Brabham’s history, neither car would make the field. 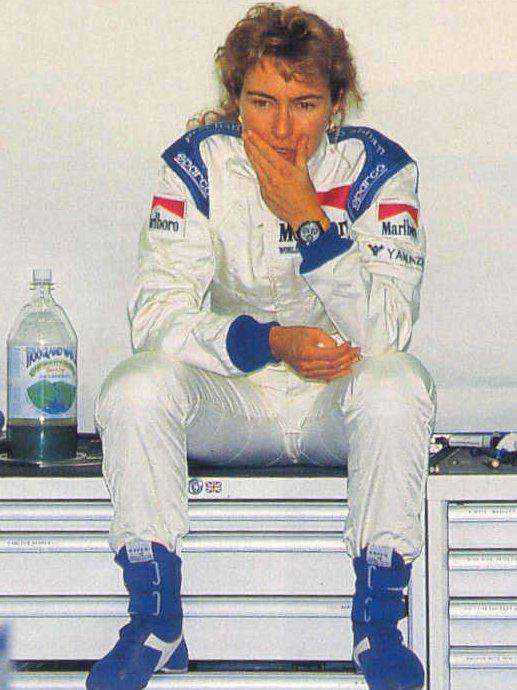 Brazil would find Amati a further eleven seconds aloft and out of Formula One almost as quickly as she came. The funds which secured her seat had never materialized, so the team figured that they might as well put someone with talent in the car as they weren’t getting any money anyway. Amati was replaced by some bloke called Damon Hill who still would not qualify for his first five attempts, only making it into two races towards the end of the season. And with that, a historic team that had won 35 Grands Prix, four WDCs and 2 Constructor’s Championships was gone.

But wait a minute? Where does all that crying business from the intro come into play? Good question, dear reader. You see, Giovanna Amati was the daughter of a Roman millionaire, Giovanni Amati, who owned the largest chain of movie theaters in Italy ’s largest city. And one afternoon back in 1978, while sitting in a car in front of her parent’s villa, three masked men seized the then sixteen-year old Giovanna, threw her into a van and drove away.

Her captors originally hid her in a house not too far from her own home, but when the police came by, ringing the doorbell on a couple of different occasions, she was put into a large plastic bag and driven to a more remote area. She was held prisoner at this new location for 74 days, most of which were spent in a coffin-like box, being physically and mentally abused. During this time, however, one of the men, thirty-one year old Daniel Nieto, befriended Giovanna.

Amati’s father was eventually able to talk the kidnappers down to $925,000, about half of their original ransom price, but the police had frozen his assets in an attempt to keep the family from paying the criminals. He secretly raised the funds by diverting his theaters’ box office take from the blockbuster “Star Wars”. In addition, his wife, a former actress, sold some of her own jewelry…and talked her servants into lending her their life’s savings!

Giovanni Amati delivered the funds to ringleader Maurizio Massaria’s tobacco shop. Shortly after Giovanna was returned safely, police raided Massaria’s apartment and arrested seven of the suspected kidnappers. All but Daniel Nieto, who had escaped and left town.
A month after her ordeal ended, Giovanna began receiving flowers and love notes from the man that had so recently held her hostage. She then began receiving calls from Nieto at her sister’s apartment, rekindling the bizarre affair. When the police learned of this, they convinced Giovanna to assist them in Nieto’s capture, lest she be arrested herself as an accessory to her own original kidnapping and extortion. 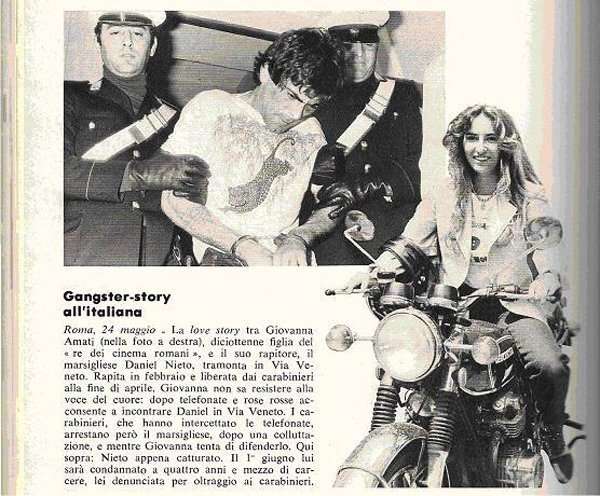 With the police listening in, Amati agreed by phone to meet Nieto on Rome’s Via Veneto. As Giovanna arrived on her motorcycle, police surrounded her would be lover as he stood waiting on a street corner. He drew a gun, but they fired warning shots at his feet, forcing him to drop the weapon. As he was carted off to jail, Giovanna followed, screaming, weeping and begging for the forgiveness and release of her lover.

Who knew Formula One drivers could be so romantic?