I remember being very angry on the day that the Austin Grand Prix was announced. The news came as a shock to just about everyone, with more than a few stating rather vehemently that the race would never take place. We are now within days of the GP that many thought would never happen; the funding wouldn’t come through, the track couldn’t be built, no one would come, just another of Bernie’s ploys to get a race in New York….yadda, yadda, yadda. This was the reason behind my anger. How could anyone ever doubt the intentions and abilities of my home state?

The greatest fear in many minds, including my own, was that the powers that be would turn a blind eye to the past and slot the 2nd GP ever to be held in the Lone Star State smack dab in the middle of the calendar, just like they 28 years ago. It could be understood, I suppose, that the best reason to doubt the validity of another race in Texas stood out above all others: Dallas, 1984. 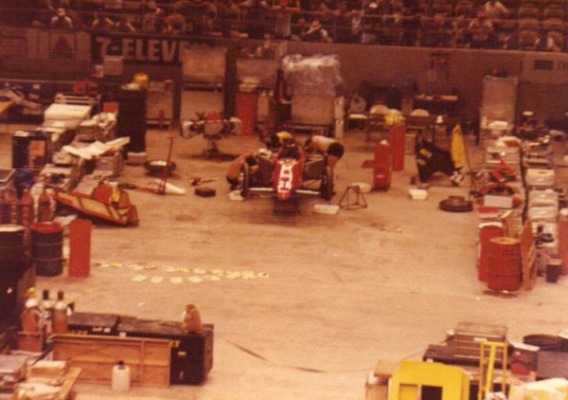 USGP West promoter Chris Pook helped bring F1 to Texas with an eye on showcasing “Big D” as a world class city, filled only with millionaire oilmen and their doting, big haired housewives. With pre-race festivities held at the world famous Southfork Ranch, home of the even more famous prime time soap opera, “Dallas”, it may have been easy for the city to convey that image to the GP fraternity. The event itself, however, would be held on a temporary circuit set amidst the Texas State Fair Grounds, which themselves are located in an area of Dallas which is, to put it mildly, not noted for it’s wealth or opulence, with the paddock themselves situated in one of the Fair Ground arenas.

On top of the less than world class locale, the 1984 Dallas Grand Prix was scheduled for July 8th, two weeks after the other U.S. round in Detroit. Whereas the weather at the far north of the States was ‘warm & sunny’ the clime in Dallas in July, as it is on most Texas days between the beginning of May and the end of September, could best be describes as just plain stupid, much like the decision to hold a race in Texas during the summer.

With track temperatures reaching 150 degrees Fahrenheit, the surface began deteriorating almost immediately during Friday’s first practice. Just barely into the session, rookie Martin Brundle put his Tyrell hard into the barriers, breaking both ankles and ending his 1984 season early. A 50 lap Can-Am support race on Saturday destroyed many sections of the track surface so badly that a repair team worked throughout the night to have the circuit ready by race time. With the normal Sunday race start moved up from 2pm to 11am in order to minimize the heat, the pre-race warm-up was moved up to 7:45am. Luckily for Williams driver Jacques Laffite, who had shown up in his pajamas in mock protest of the early start time, the practice session was cancelled as the track was still not ready until 30 minutes before the green flag. 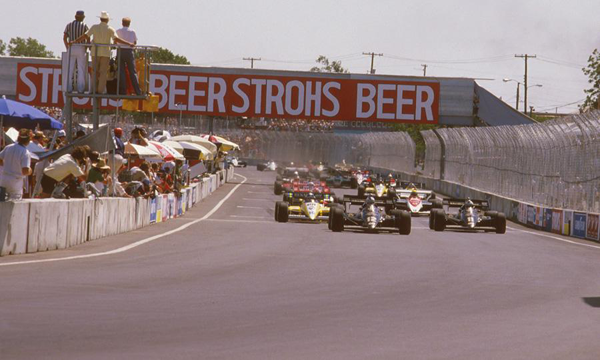 Even with some drivers pushing to have the race abandoned, Nigel Mansell would start the race from pole alongside teammate Elio de Angelis, Lotus’ first front row lockout since the 1978 Dutch GP. The season dominating McLarens of Lauda and Prost started 5th and 7th respectively, while the 4th place qualifying Rene Arnoux had to start from pit lane following an electrical issue on the grid. Other notable starters included the Toleman of Ayrton Senna in a strong 6th place grid spot, Keke Rosberg in the Williams in 8th and reigning WDC Nelson Piquet’s Brabham well back in 12th.

At the flag, waved by “Dallas” star Larry Hagman, Mansell jumped out from his pole slot while 3rd place starter Derek Warrick quickly moved his Renault into 2nd. An attempted pass for the lead resulted in a spin by the Englishman on the 11th lap. Lauda, meanwhile, had moved past de Angelis and also made attempts on Mansell, though he too began to fall back with engine issues. Rosberg was moving up through the field and got past Lauda to begin hounding the Lotus cars, now again running 1-2.

Having started from the back, Arnoux had made up 7 positions on the first lap alone and was up to 7th by the 20th lap. Alain Prost got around the McLaren of his teammate and de Angelis, who had been passed for 2nd by Rosberg on Lap 18, who in turn finally forced Mansell into a mistake to take the lead himself. Within 3 laps, Mansell’s fading tires had lost him a further 3 positions and eventually required a pit stop for new rubber.

Prost got around Rosberg for the lead on lap 49, but clouted the wall 8 laps later. The Professor was in good company, as his off was preceded by the retirements from either spins or contact of Henault, Cheever, Warwick, Patrese, de Cesaris, Cecotto, Tambay, Piquet, Surer, Alboreto and Boutsen. Just 4 laps later, Lauda, too, would spin out of the race. 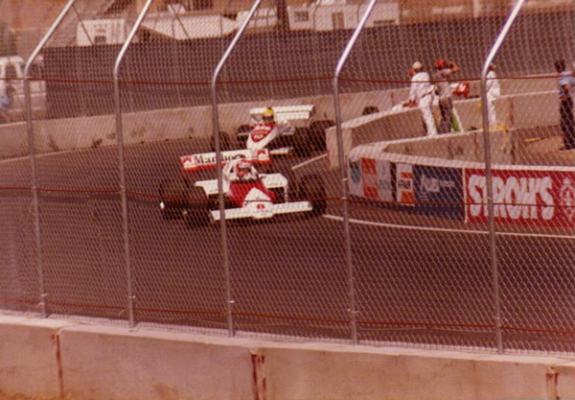 By the time Rosberg took the checkered flag, just 8 cars were left on track and only Rene Arnoux, who had driven through the entire field to finish 2nd, was on the lead lap. Having suffered a gearbox issue coming out of the final corner, Nigel Mansell leapt from his Lotus and attempted to push it across the finish line. However, the 104 degree heat and exhausting race was too much for him and, in ever dramatic Nigel Mansell style, the Brit collapsed onto the sticky black Texas tarmac.
While the other drivers were suffering and falling by the wayside, Keke Rosberg was able to keep his cool thanks to a secret weapon; prior to the race, the Finn had purchases a water cooled skull cap, which he wore underneath his helmet! Fairly common practice today, the innovation was ahead of it’s time enough to help Rosberg take his only win of the 1984 season.