F1 Biography: Still in the shadows

“His men included scholars with advanced degrees and burly athletic types without higher education, but who could walk all night through enemy forests, ride horses, paddle canoes, parachute from low altitudes and kill a man with a single karate blow.”

One thing that we know for certain is that the Shadow teams had some of the most alluring livery of the 1970s, almost always clad in black, sleek and mysterious. They were touched by both tragedy and victory. They won in Formula One. They won in Can-Am. That much we know.

One thing that cannot seem to be agreed upon is the legend surrounding Shadow’s founder, Don Nichols. Almost every team bio that I read invariably touches briefly on the ‘fact’ that he was a military spy working for the U.S. government in the Far East previous to and possibly even after his time in Formula One.

But are they one and the same? Did Don Nichols serve in WWII, collecting Lugers taken off of German Officers behind enemy lines? Did this same Don Nichols once establish the most successful special ops unit of the Korean War? Did he originally work in racing in Japan as a front for his covert operations for the CIA during Vietnam ? Was the Shadow team logo a cryptic hint at his secret past or rather just a playful nod to his favorite childhood radio serial?

In the late 1940s, a Master Sergeant Donald Nichols had spent years cultivating an underground network of intelligence that spread throughout both North and South Korea . The quality of information that he was able to generate for the Fifth Air Force exceeded that of both the newly formed Central Intelligence Agency and the Army’s Far East Command.

In 1950, his warnings that the North were set to invade were ignored by both General MacArthur and Washington. Less than 72 hours later, Truman’s first notice that war had in fact begun was via a report directly from Don Nichols as he fled Seoul . As 100,000 N. Korean troops invaded the city, he had stayed behind to destroy abandoned equipment and aircraft, only escaping by clinging to the side of a small boat as it crossed the Han River out of the city.

This same Donald Nichols would win various medals for feats of bravery and espionage. He once directed a team to rescue the surviving crew from a downed B-29 bomber. Not once but twice did he lead a group of paratroopers more than 100 miles behind enemy lines to retrieve technical data from downed Russian MiG-15s. The second time, he managed to bring the entire jet back.

After returning from Japan in the late ‘60s, a Don Nichols formed Advanced Vehicle Systems, Inc. in California with the intentions of building a Can-Am racer. They called the car a Shadow, with a cloaked man as the team logo, and hired George Follmer and Vic Elford for their debut season in 1970. It was a couple of years before the car would become competitive and, by 1974, Jackie Oliver would win the championship for the team.

Simultaneously, Shadow had entered F1 in 1973. With Universal Oil Products (UOP) on board as sponsor, the team kept on Oliver and Follmer as drivers, with Oliver doing double duty in Can-Am. Follmer finished 6th on their debut in S. Africa for a strong start, though a 3rd place for each driver would be the only other points that first year. With a succession of drivers, Shadow would finish 8th in the Constructors Championship in three of their first four years, with a 6th in 1975. 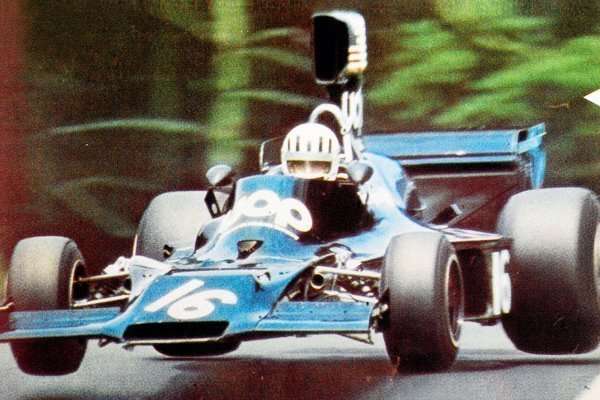 1977 would see the highest and lowest points for Shadow. At Kyalami, promising Brit Tom Pryce was killed in a grisly accident that also took the life of a nineteen-year old course marshal. Later that year in Austria , Alan Jones would take the team’s sole victory on route to 7th in the WDC.

Before the beginning of the next season, Oliver, new driver Ricardo Patrese, designer Tony Southgate and a large portion of the team left Shadow to form Arrows. Their new squad showed up at the first race with its own FA1 chassis which, according to a High Court judge in London , looked a bit too much like the latest Shadow DN9. Arrows expected that they would not be allowed to race this car and had also designed another chassis, the A1, which debuted a few days later.

Shadow soldiered on for three more seasons, with drivers such as Hans Stuck, Clay Regazzoni and Elio de Angelis behind the wheel, though they would only manage three points paying finishes across these last years. After thirteen DNQs amongst three drivers across the first seven races of 1980, Nichols sold the team to Chinese businessman Teddy Yip who would form a revamped Theodore Racing.

A Donald Nichols retired form the U.S. Air Force in 1962, due to failing health from numerous diseases he had been exposed to in Asia . A Don Nichols, one of the most unique warriors in modern American history, died in 1992 in the Veterans Affairs hospital in Tuscaloosa , Alabama . And to this day, a Don Nichols can still be found at vintage racing events in the U.S. , many of which feature examples of both Formula One and Can-Am Shadows, almost always clad in black, sleek and mysterious.

Previous articleButton predicts KERS will give McLaren an advantage in 2011
Next articleBreaking: Ecclestone mugged and hospitalized