Day three of testing took a chilly turn with a blanket of snow overnight. The red flag started the session due to the inability of the medical helicopter to fly and efforts were made to clear the track so teams could run if the red flag was lifted.

“Even when the snowfall turned to rain in the afternoon, temperatures never reached the sort of numbers required to run a Formula 1 car,” Ferrari said.

“Air temperature just crept over two degrees with the track a fraction more.

“There was no point in venturing out, because with such low temperatures, even the wet tyres would not work properly and furthermore, running would not generate any worthwhile data on how the car was performing.

“Come the afternoon, Kimi and the team took the only reasonable decision, namely to write off the day, which under the current regulations cannot be recovered later.”

It is the risk you run and the costs of going rather south is one of the larger inhibitors to doing so. The teams have a lot of work to compress into the remaining tests days.

I’m not entirely sure what they are complaining about because Pirelli should have brought their snow tire. ;) 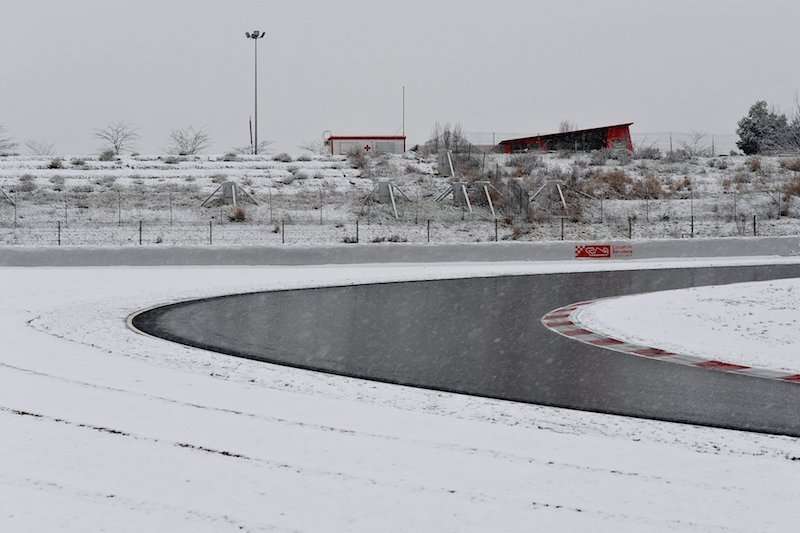 Turn those tire warmers up a couple of extra degrees!

It is a bit of a bummer that 2 teams held out on using Friday as a makeup day, wouldn’t want anybody catching up… I wonder which 2 those were!?! (hint: its probably a) the two with the most reliable PUs, and b) a PU manufacturer)

To add a bit of humour, Alonso led the day and did get 5 times the mileage of his nearest two competitors. In another sign of an improving car the wheel nut stayed attached this time!

And he didn’t came upon a Honda/Toro Rosso so all he saw was only white.

It was Williams and Ferrari. They had each rented the track for “filming days”. Yes it was selfish, but also a smart, strategic move!

FAKE NEWS!!!! Everyone knows it is IMPOSSIBLE, because of global warming, for it to have snowed at the preseason test. These lies are just being pushed by neanderthals who want to bring back the EVIL naturally aspirated V8 engines…..

I know, it’s a joke, but… because of global warming the ice caps melt, which raises the sea levels a bit but more importantly cools the water down, which in turn means that the warm gulf stream that keeps europe warm disappears to the south (yeah, past spain) and as a consequence temperatures drop in europe effectively instating a new ice age, a bit like the mini ice age they had a couple of hundred years ago, https://www.rijksmuseum.nl/nl/rijksstudio/kunstenaars/hendrick-avercamp/objecten#/SK-A-1718,0, but more severe. Ah well that’s the theory, but according to heat camera images of NASA it already has begun. And yes,… Read more »

I know it’s cheaper, but they really should go to Bahrain and test in real conditions.

But Fernando’s time was awesome! in the 18s!

This is Formula 1, not World Rally Championships.

F1 cars don’t use studded snow tires – they use chains! Didn’t you see Verstappen in Kitzbuhel?