Formula 1 gave us an interesting glimpse behind the progress that is being made toward the 2021 regulation changes. Replete with a video of a 50% scale model running with 18” tires and its rake being moved up and down to measure airflow from behind the car.

The disturbed air coming off of a car is a large contributor to the challenge F1 has with racing close and passing. The Ross Brawn led F1 group along with the FIA have been working hard with CFD (Computational Fluid Dynamics) to create the car of the future and prevent some of the drawbacks of dirty air as well as include new elements such a18” tires.

As f1.com explains, it was an interesting way they tested the new models using Sauber’s wind tunnel:

“Ahead of the German Grand Prix, a model of the latest 2021 iteration was put in the Sauber wind tunnel under strict conditions of secrecy, for extensive testing. It came after a first run in January, where a 2018 60% model was used, and a second run in March, when an iteration of the 2021 car was tested with 13-inch wheels. While the general results will be shared with all teams, Sauber’s independent consultancy group ran the wind tunnel ensuring that their F1 team (Alfa Romeo Racing) gained no advantage.”

The Sauber wind tunnel can measure rake in a very effective manner and thus, it was a good choice for the technical group. One difference in the group’s approach versus a team’s approach to wind tunnel and car design is the focus of the test as the group’s Pat Symonds says:

“The wind tunnel testing we are doing is slightly different to what the teams might do,” says F1’s Chief Technical Officer Pat Symonds. “The teams concentrate solely on the forces on the car, through a variety of attitudes as they move the car around. While we naturally have an interest in what those forces are and particularly how those forces change as the car moves, we’re even more interested in what is happening to the turbulent air behind the car.

“For that reason, although we are doing most of our development in CFD, and that CFD is using some pretty advanced techniques which aren’t commonly used by the teams, we want to back up the virtual simulations with a physical simulation. We also chose to use a 50% model rather than a 60% model and we chose to run that model quite a long way forward in the wind tunnel, so this gave us the opportunity to best inspect the wake of the car.”

As Nikolas Tombazis, the FIA’s Head of Single Seater Technical Matters, points out, the leading car has has fewer elements that it can use to control its wake and the trailing car, designed properly, may be far less susceptible to the disruption. 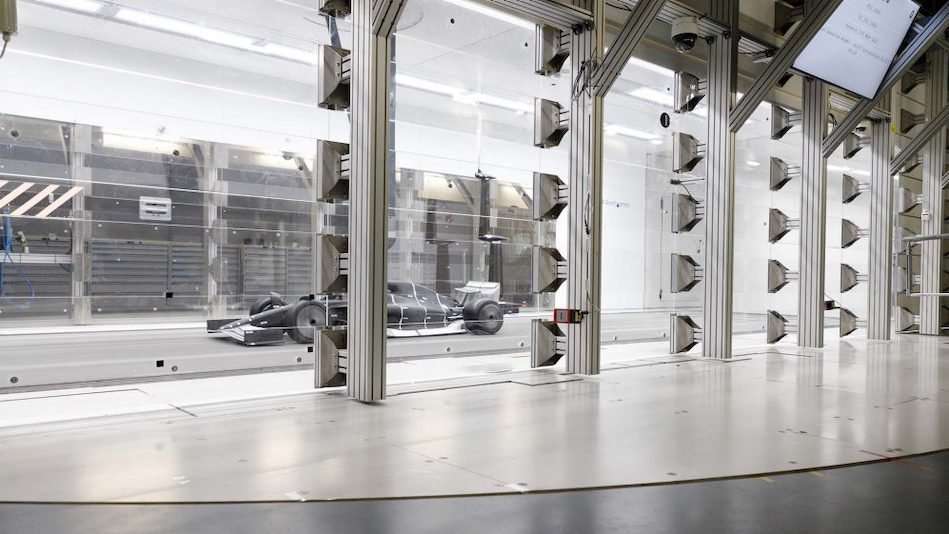 The big question is, how are the tests going? Are they achieving the desired effect? What have the test proven?

“That fundamentally the CFD was correct,” says Tombazis. “There have been no major surprises. So there is a 5-10% wake disruption, compared to the current levels of 50%, although it depends on the exact configuration you are testing and so on.”

Pat Symonds was even more effusive:

“actually beyond what I thought we could achieve when we started the project”. He adds: “With the configurations we have got at the moment, the results are exceptional.”

“Of course, this level of intensity, it falls far short of what the teams are able to do, in terms of sheer manpower you can throw at things, but we have a good – albeit small – experienced team of aerodynamicists, and we have access to an awful lot more computing power than any of the teams have as we’re not restricted in any way,” says Symonds.

“Through our Amazon Web Services (AWS) connections, we’re using their super computers and they are running an awful lot more computing cores. In CFD, we have to split the environment up into lots of little cells and we solve equations for each one of those cells. In a typical team environment, they are using 192 cores to solve 95 million cells.

“In our current configuration, we’re using 1152 cores and we’re solving up to 550 million cells. And next year we have potential to move up to 2300 cores. We have more than an order of magnitude more of computer power that we’re throwing at it than the teams might use, and that allows us to use the two-car simulation.”

All of this work isn’t being done without team involvement. According to Symonds, they’ve been engaged and very helpful int eh process and you would expect them to stay close to the work being done that will define their futures.

“The teams have been very good, the teams that have had the resources to do it, have worked on a number of projects for us, and they are all fully informed of what is going on,” says Symonds. “We have meetings every few months, we send our geometry to them, they then run that in their own CFD environments and they feedback results to us. They have been as involved as they want to be. Some can’t put the resources in. All teams results are shared until we get to the cut-off point, where from that point on they have to operate within their declared rules.”