Formula 1’s Ross Brawn and team have been working hard on the new regulation and future car design for quite some time. This week, they released pictures of a mocked up version of what the car might look like.

While the initial release photos were great, I enjoyed their follow up story pointing out the difference between now and what will come. The key elements that differentiate this year’s car versus what is coming in 2022. 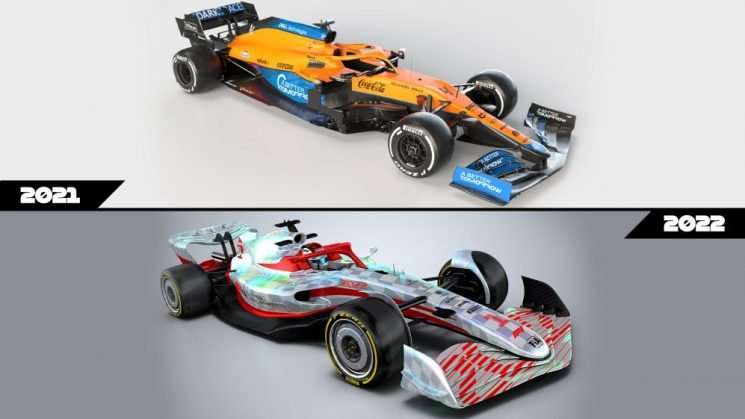 Ultimately the key will be the dramatic reduction of dirty air allowing cars to follow each other closely and even pass each other. This has been one of the most difficult issues plaguing F1 for years now.

It was also said this week that the series would remain with the current hybrid power units until 2024 when they will begin looking at alternate e-Fuels and possibly hydrogen. There were the usual suspects at a meeting to discuss the future power unit but they had a couple of guests in the form of Audi and Porsche, both VW owned marques, and some believe that’s a good sign.

Looks ghastly with the reflective paint. However, as long as we can get good close racing it could be pink with tassels on it for all I care.

I agree . . . As long as this new set of regs produces good cars and good racing I don’t really care that much about the looks of the car.

Can’t wait to see how the teams tweak this thing. It’ll be one of those ‘Expectation/Reality’ pictures.

I like it. Reminds me of the cars in Button/Vettel era circa 2009 — pronounced nose over the front wing and lots of curves. But as others have said, we’ll have to wait and see what the teams actually do with the concept.