As Mercedes gear up for the 2022 Formula 1 season, there are lingering questions about Lewis Hamilton’s return to the sport after the 2021 Abu Dhabi Grand Prix. The possibility of retirement is certainly in the rumor mill and while I would be surprised to see Lewis make such a decision, in reality, all great champions eventually retire. Sooner or later.

Mercedes had another great champion retire from their ranks back in 1958 but this was no average champion, this was the great Juan Manuel Fangio!

Fangio was the modern F1 era’s first dominant champion and no list of Formula 1 greats lacks his name toward to the top of the order. He is synonymous with driving excellence and was among the oldest drivers starting in his late 30’s. He drove for Alfa Romeo, Maserati, Ferrari and Mercedes. 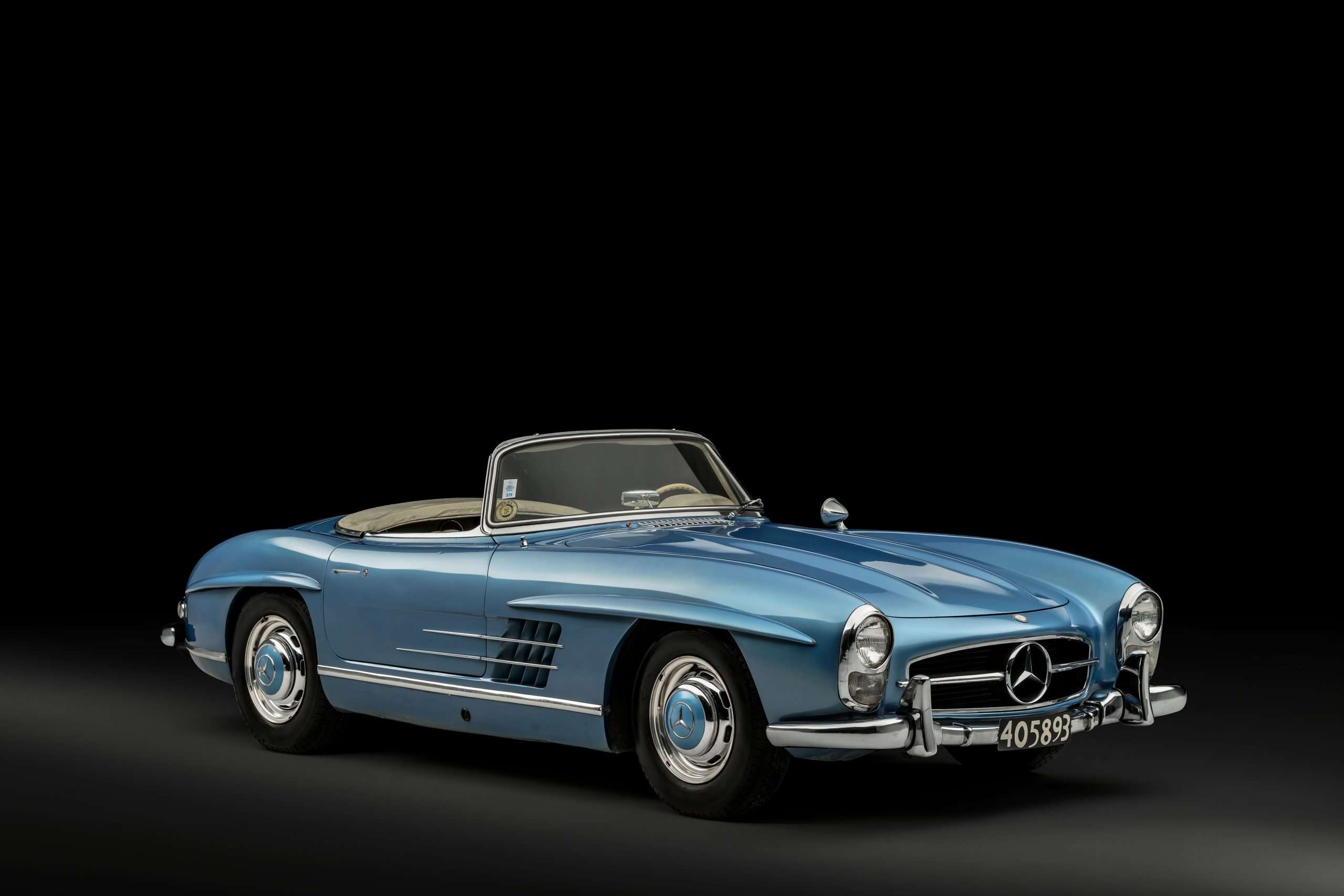 Fangio left a very large footprint on the neck of Formula 1 and he was one of motorsport’s first megastars. In fact, he was even kidnapped on 23 February 1958 when two gunmen of Fidel Castro’s 26th of July Movement entered the Hotel Lincoln in Havana and kidnapped him. He missed the race but was released soon after.

When a 5-time world champion retires, what parting gift do you give him? If you’re Mercedes, you give him a 1958 Mercedes-Benz 300 SL of course.

Fangio drove this car over 70,000 km on tours of Europe and South America and is perhaps the car he covered more distance in than any other during his retirement. He kept the car throughout his later life and passed it to his family who displayed it at the Juan Manuel Fangio Museum in Balcare, Argentina since 1986.

Finished in Metallic Light Blue over a Cream leather interior, it was an instant hit with Fangio. El Maestro, as he was known, is pictured on many occasions behind the wheel of the car with its roof down, while its matching-colours hardtop can be equipped for driving in all weathers. Throughout its years of personal ownership as one of Fangio’s most treasured cars, the 300 SL was known to follow the driver around the world.

It is believed that almost all of the 72,951 km currently showing on the odometer was accrued at the hands of Fangio. He received the car in England and immediately embarked on a driving tour of Europe with his girlfriend Andrea Berruet, playing out his new role as an ambassador for Mercedes-Benz. One of the most memorable pieces of footage of Fangio is an “onboard” of him drifting a Maserati 250F at the Modena Autodrome, and it is fitting that at the very beginning of the film, Fangio draws up alongside his 250F in this very 300 SL. This 300 SL would be used by Fangio for his Mercedes-Benz ambassadorial work in Europe up until 1960. 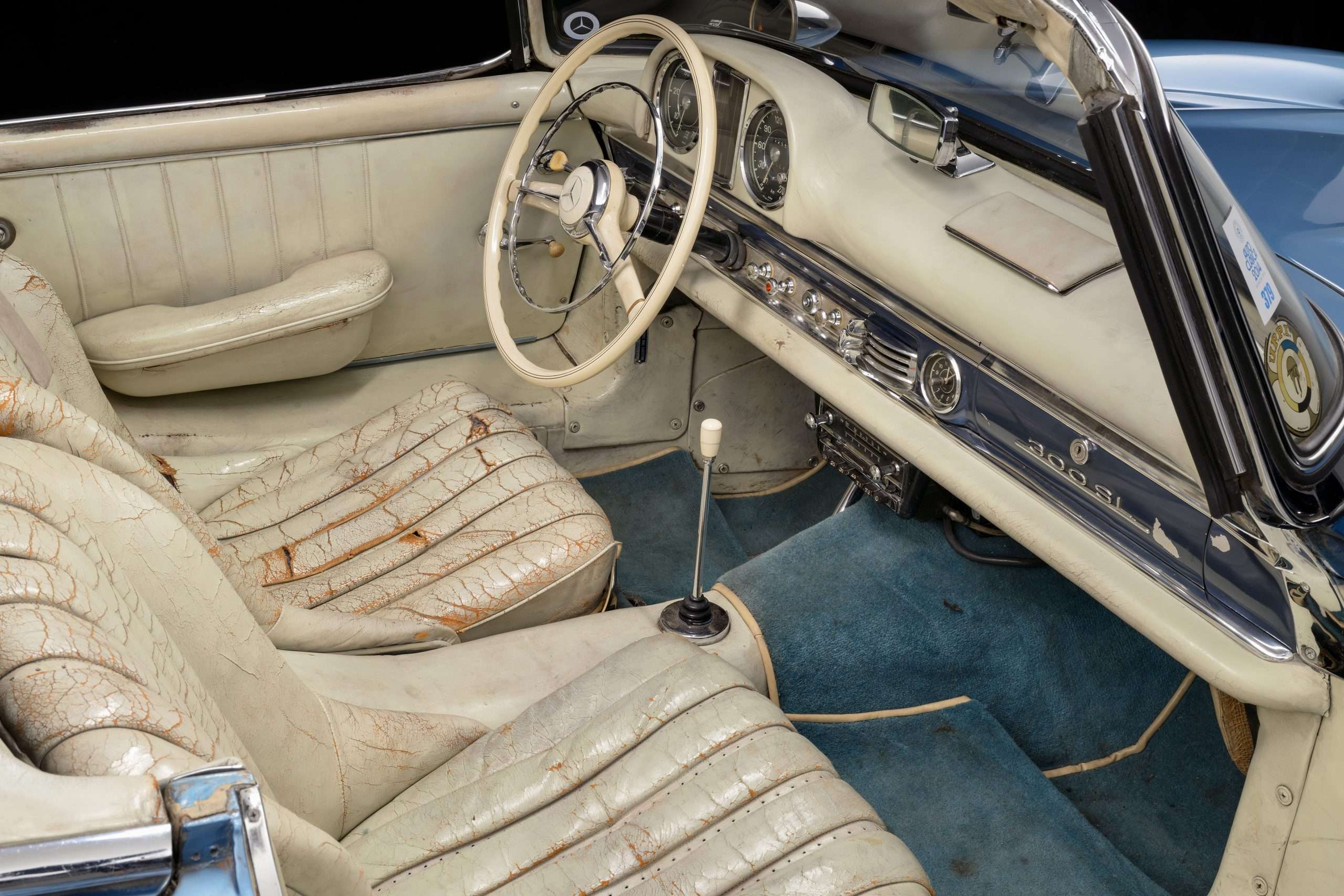 Amazingly, RM Sotheby’s is set to bring to market the ex-Juan Manuel Fangio 1958 Mercedes- Benz 300 SL Roadster. The bond that Fangio had forged with Mercedes-Benz was such that the 300 SL Roadster was delivered in time for his 47th birthday, received at The Dorchester Hotel in London, marking his phenomenal achievements for the Stuttgart-based outfit in motorsport.

Perhaps if Lewis Hamilton does decide to retire, Mercedes could buy this car and present it to him as a parting gift and the circle would be complete. Nothing against an AMG Black label but if I were Lewis, I would cherish a gift like that driven by the great Fangio himself!