It’s been a long wait and it may have taken a public criticism of Kimi Raikkonen from Ferrari CEO Sergio Marchionne but the Scuderia have locked out the front row for the Russian Grand Prix for the first time since 2008 denying Mercedes their 100% record in Sochi.

Ferrari looked dominant in all three practice sessions and I had even ascribed Sochi’s cooler temperatures and smoother track surface as advantage Mercedes but the weekend wasn’t shaping in to that scenario.

Come qualifying, Mercedes did seem to turn the wick up and ran a strong Q2 session but it was Q3 that saw a resurgent Ferrari find the time with Kimi Raikkonen leading provisional pole on their first runs.

On the final runs of the session, Raikkonen ran wide on the final turn allowing teammate Sebastian Vettel to nip pole from him and lead a Ferrari 1, 2 locking out the front row for Sunday’s Russian Grand Prix. Valtteri Bottas was third while Lewis Hamilton was adrift in fourth.

“I think it’s just great”, said Sebastian. “We had had a very good run also yesterday and this morning, and the car was phenomenal. So there’s no real secret to today’s result, it’s just the fact that if you get along with the car you find the rhythm and know what to expect. We knew it would be very tight against the Mercedes, it could have gone the other way, but I am very happy that we locked out the front row for the team. I had a good start to Qualifying , then in Q2 I lost a bit the rhythm. My first run in Q3 was not very tidy, so I left it to the last run. For us it’s so important as Mercedes had done an impeccable job in the last few years, so it’s great for the team and for me that we managed to break that. But now we’ll see what tomorrow brings. It’s a long race and we’ll try to confirm this result”. 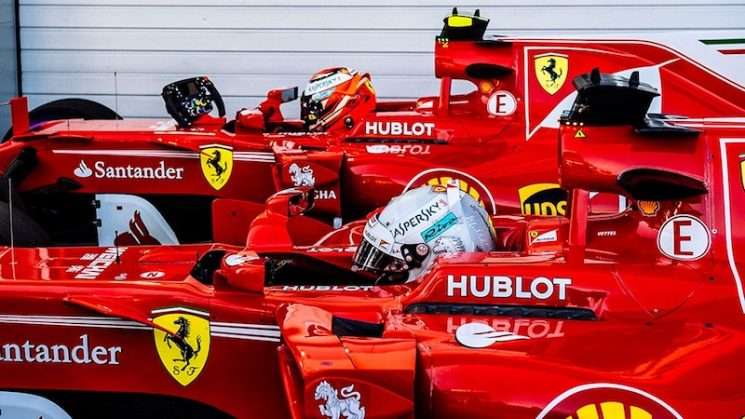 Ferrari need to make the most of these opportunities as it looks like they will suffer grid penalties before the end of the season due to excessive power unit use. It may not make for an exciting race tomorrow (if Ferrari drive away from the front) but it could lead to a close end of season battle for the title.

It’s a good point and as I said before the season started, this 4-engine rule will bite F1 in the butt. The fact is, it’s harming Honda already and should the title chase be neutralized via engine penalties for Mercedes or Ferrari, they will have screwed their own excitement.

We’ve had four race tracks so far and the two teams look to be there or thereabouts with each other and to lose this close battle over engine penalties will be a damn shame.

Could they be rotating power units, or is that not allowed?

Yes they can. Any combination (mix) of the 6 components may be used by one car at any one time.

The FERRARI performance in Sochi just caught many people by surprise.

It was not only the smooth surface and the cooler temperatures but the track itself was claimed that it belongs to Mercedes/made for Mercedes, this because up to Friday FP1 nobody had as yet managed to trouble them over there. Comes the race and some still hope that, we will see a fracas at the first corner with the front runners involved, or that the Mercedes cars will be one and two by the first corner (race start mode). well everything can happen in formula one but it should be remembered that the start-finish line to the first corner in… Read more »

Has anybody noticed/seen the poor FERRARI man Assigned engine starting duties when the camera showed one of the two being started in the garage? it looked more akin to somebody holding a horse by the tail while the horse farted a big one, looks like they (FERRARI) had copied Mercedes in using oil as fuel!. could also be that was why FERRARI managed to beat Mercedes in all four seasons in Sochi so far!.

somebody in malta is a happy guy today!

FERRARI needs to maximize their opportunities while they can because it is looking like they may take grid penalties , that is while Mercedes have now to rely on FERRARI reliability problems. certainly looking great.

Just watched my recording of the quali session. That was quite exciting. Its phenomenal for Ferrari to get a front row lock out, and to have been so dominant over the whole of practice. But its the ‘mid field’ thats really fascinating, it really looks like the p.u parity might be real in that group as 5th through to 16th is really close and tightly contested right through practice and quali. RBR must be irritated that they’re part of that pack at the moment, but it will be awesome if it stays like this with 6 teams battling for the… Read more »