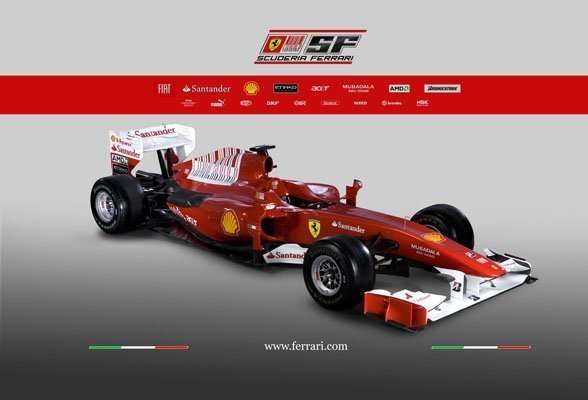 Today over 3 million people logged in to Ferrari’s website to view the 2010 car launch. The online launch was started by President Luca di Montezemolo:

“The presentation was very emotional, because I was excited. For me, Ferrari, together with my family, is the most important thing in my life.â€

â€œThis is a very emotional moment Iâ€™m confronting with anticipation, but I wonâ€™t know where we stand before the Saturday of the qualifying in Bahrain. The team worked with determination and unity I havenâ€™t seen for a long time.â€ 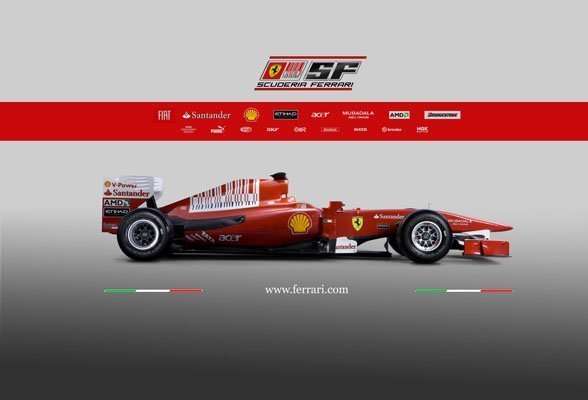 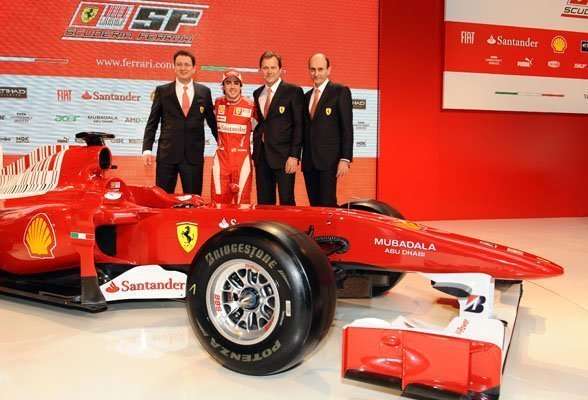 The event was well attended by the press which inevitably turned from the Ferrari car to the question of former employee Michael Schumacher’s return as a Mercedes GP Petronas driver:

â€œI like Schumacher and Iâ€™m this misdeedâ€™s author. It was me who woke his desire to come back to racing and honestly I never thought Iâ€™d see him in a car that wasnâ€™t a Ferrari. Heâ€™s a competitor, an opponent, like many others. Iâ€™m not worried about the possibility that he might have taken material from our development.â€

â€œWhen Ferrari decided in 2005 to take Raikkonen the alternative was Alonso, who now finds himself in a fundamental moment of his life. Heâ€™s matured, young and strong; he has won two World Championships, one in 2005 and one in 2006, beating us 100%. We donâ€™t have any problem as far as our drivers are concerned. We have Massa, who is back with further enthusiasm, we have Alonso I just told you about and then we have Fisichella as the third driver and two very experienced test drivers: Marc Gene and Luca Badoer.”

Surprising to me was the small size of Santander’s logo on the car. I was under the impression, wrongly it seems, that Santander was a larger sponsor of Ferrar but as the car today shows, it is still Marlboro on the engine cover and predominantly displayed.

As a long-time Ferrari fan, I am not sure how I feel about the white wings. It looks a bit like a Force India car to me. I guess sponsor dollars don’t get you much as far as car real estate goes these days and the white wings were needed for Santander’s red logo.

Good looking car? What do you think? If I am honest, I must say that I found the comments from di Monetzemolo a bit odd. Sort of a non sequitur for me during a high profile car launch. Odd.

How does Ferrari’s newest driver Fernando Alonso feel about his prospects for 2010?

“Every season is exciting and interesting at the start; even last year I was very confident. Itâ€™s the same this year, although there are the expectations regarding Schumacherâ€™s comeback, which is very good for F1, which might be well received by TV viewers. I think that there will be two teams fighting for the Driversâ€™ Title and two for the Constructorsâ€™ Title. Letâ€™s hope weâ€™ll be there. Winning the title. Iâ€™m not making a bet here, right now everything is too open.â€ 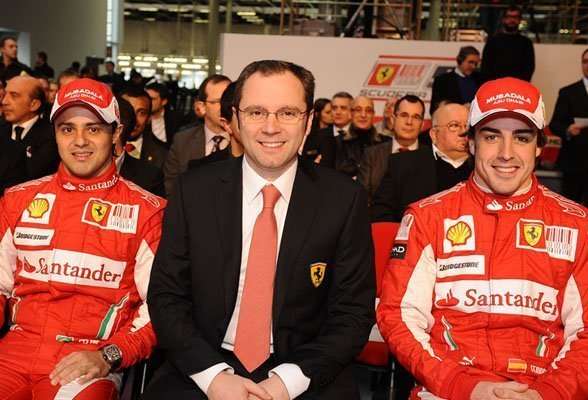 Speaking to journalists, Felipe Massa said he expects Ferrari to be competitive roght out of the box:

â€œWeâ€™ll start with less petrol into the weekend, while we will start into the race with enough petrol for the whole distance. Then there are other details, such as the points assigned to the first and second in the races. Having all these changes in mind we have to pay a lot of attention and learn rapidly in terms of strategy and, as far as I am concerned, regarding driving the car to be immediately competitive.â€œ