Ferrari have lost their right to review request after the Canadian Grand Prix stewards convened to hear the team’s concerns and review additional information they possessed. The stewards examined the evidence and decided the following:

“There are no significant and relevant elements which were unavailable to the parties at the time of the competition concerned.”

I am unclear as to what additional information Ferrari brought but apparently it wasn’t compelling enough to force a penalty review. The team looked at the telemetry from Sebastian Vettel’s car, camera views from both cars with multiple views, Vettel’s face camera, post-race video and images, GPS data and witness statements from Vettel.

I also found it interesting that they reviewed a video analysis performed by Karun Chandhok for Sky Sports after the race. IF memory serves correctly, Karun didn’t agree with the penalty but perhaps his video analysis was revealing something more.

Hard to imagine the fate of a team in the hands of Karun Chandhok but hey, it could be worse. ;) 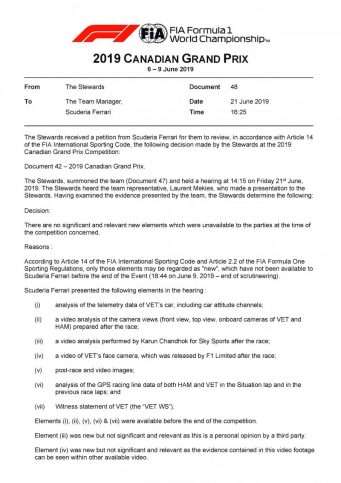 Since the appeals process is a joke the teams need to be able to have some leverage against the stewards. The current system is to have each GP appoint stewards rather than have a team of stewards that travel to each GP, while I don’t like the current system it may provide the leverage the teams need. If the results were counted to allow the teams to exclude a few of their results, perhaps count the best 19 out of 21 races for example, towards the championship the teams would be able to respond to bad calls by the stewards.… Read more »

The fact that Vettel keeps choking up while under pressure, and that he was an advocate for the HALO, tells me that he simply does not have the “man-bits” necessary to beat Lewis right now. You add on top of that that he doesn’t have a superior car, and frankly this penalty wouldn’t have made a difference.