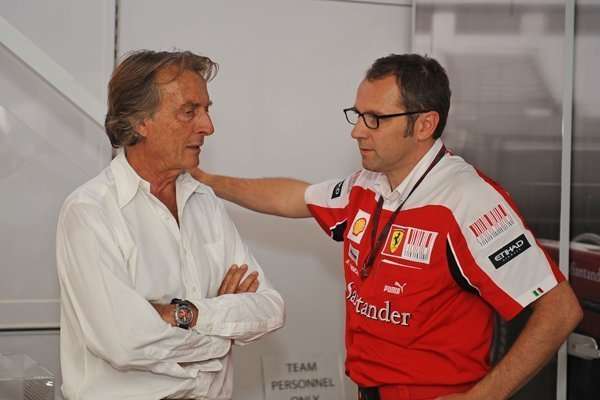 Ferrari, according to Auto Motor und Sport, have started their campaign against the FIA’s 2013 engine specifications which calls for a 4-cylinder turbo engine with less horsepower and lower fuel consumption. Ferrari President Luca di Montezemolo has suggested that this does not fit the Italian team’s model and is looking for allies to challenge the regulations. Now, whether you believe the story at AMuS or not, it’s a good conversation starter regarding the 2013 lump regulations.

While Ferrari detractors will be claiming “Italian arm-waving”, it actually makes logical sense as we’ve been discussing on our podcasts since the regulations were announced. The FIA, it seems, are attempting to woo manufacturers back to the sport with a ubiquitous engine specification and the 4-cylinder fits the bill as many car makers are using them with their hybrid technology and other low-fuel consumption cars. If you felt the new teams were not the answer to a healthy and stable F1 series, then you can understand the FIA’s attempt to lure Honda, Toyota and others back to the sport for some propping up.

Ferrari, on the other hand, has no 4-cylinder models or aspiration to build one. They see no logic in spending the money to build an all-new engine specification when the current V8 fits nicely in their catalog. The notion of a Ferrari with a turbo 4-cylinder is as unorthodox as it can be. Ferrari will not reap rewards from their 4-cylinder F1 program influencing and permeating their road car division as the 4-cylinder has no home there.

Before you get too irate over Ferrari’s comments and trenchant position which is directly attached to their business model, the story also quotes Mercedes GP’s Norbert Haug as suggesting the FIA may be leaving the V8 format a tad too soon. If you consider that Mercedes do have use of a 4-cylinder engine, you can see where the FIA’s formula could help them improve their technology in this specification but they also make some of the best V8’s in the world.

Renault have a series of 4-cylinders and this could be advantageous for the car maker but as they are/have bowed out of F1 and only remain as a supplier of engines, it is clear they could go either way and would probably desire the 4-cylinder as it is most germane to their road car program.

Cosworth, on the other hand, are in a similar position to Renault as they are merely a supplier of engines and a low-cost engine specification makes sense from their perspective. If they can reduce their cost of development, the loss of Lotus Racing/1Malaysia Racing as a client is more bearable. Cosworth could also use their 4-cylinder model to propel an engine supply program in other series as well.

The biggest winners of this formula are not even in F1 and to be honest, it’s betting a lot on the come. Some have suggested that VW have made innuendos that they will enter the series if the FIA uses a 4-cylinder turbo while Honda, Toyota and Nissan go through 4-cylinders like toilet paper at a roadside McDonald’s restaurant.

Who stands to gain? Who stands to lose? What about the new teams? Locked into the Cosworth option? Will this impact McLaren and their future engine aspirations? Does Ferrari have a point in that the current V8 is a good engine and can be further developed with a lower cost that creating an all-new 4-cylinder? Are the FIA further former president Mac Mosley’s dream of the ultimate “world engine” for the socialist in all of us? What do you think?

Previous articleOp-Ed: The top 11 things I hope to see in 2011
Next articleVacationing Alonso tells paparazzi: Let me alone, OK?