Ferrari have submitted their intention to appeal the FIA race steward’s decision that penalized him 5s and cost him the victory at the Canadian Grand Prix.

On lap 48, Vettel, following lapped traffic into turn 3, lost the rear end of his car sending him across the corner grass and back on to the track just ahead of Lewis Hamilton. The stewards offered this decision: 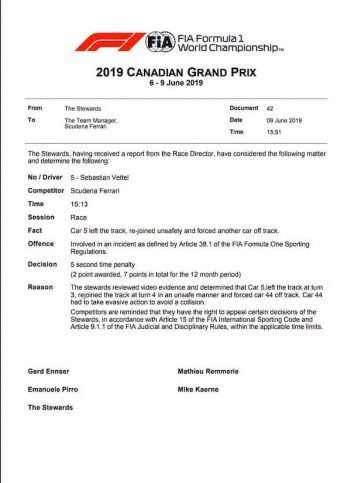 Vettel was not a happy driver and most of the F1 fans in Canada and even other drivers from around the world thought it was a bad call. Now Ferrari have had a chance to review their data and will appeal the decision. They have 96 hours to collect their data and decide to pursue the appeal or not.

To what end? Does Ferrari actually believe the FIA and its stewards will change the outcome to their satisfaction? Should we expect another threat to leave F1 in the coming days? The guys on Sky said the decision cannot be appealed.

Because they are trying to distract attention from the fact they keep bollocksing up everything they touch with dumb strategy mistakes.

I reiterate… F1 and the FIA are now rules-dependent… specs, data cohesiveness, driver’s weight (for goodness sake), how to drive, how not to drive, do-not-cross lines, okay-to-cross lines, and on and on. What everyone needs to remember is that this is not good theater, NOT racing. And the controversy of Vettel’s will help keep F1 alive (for sponsors)… but will kill off the fans. The ABC telecast has BLANK commercials in some markets! And ABC cut of the end of the Sky broadcast (which they claim went over time). The level of amateur broadcasting must be seen as the nail… Read more »

The ABC affiliate here in San Antonio dumped out of the broadcast for 20 minutes to run a 60 minute informercial to air AFTER the race. I called the station twice-no answer since it was Sunday then wrote a hard e-mail later. A return e-mail from the station’s VP of engineering acknowledged the mistake and apologized.

God, that’s awful. Can you imaging them doing that in a basketball game?

First of all I really don’t like the ‘if you’re a Ferrari fan you’ll see it this way but if you’re a Mercedes…’ when did we stop being embarrassed about altering the truth to our preference? Kudos to Martin Brundle for saying ‘well I’m a f1 fan and it sucks’. Second this is a disaster for a season in which the few things Merc haven’t won on the track have been given them by the stewards reversing the on track results. Third in all sport we’re far too often seeing the players achieve a result, glorified lawyers hashing it over… Read more »

2
Nigel, the problem with your suggestion as I see it ...
1
Today, France has announced a reciprocal quarantine period (14 days) ...
1
Could you see Mercedes hiring him? ;)
1
To be honest, if you take a broad “pull the ...
1
I understand the $145million was the lowest numerical figure accepted ...
1
As much as I would love to see Daniel at ...

Boris ponders British GP, Germany ready, Austin wary
May 23, 2020 by Tom Firth
Indeed and I wouldn’t be too surprised if the local ...

F1 teams set for $145M cost cap, radical aero handicap system
May 22, 2020 by Rapierman
Didn’t think this would ever happen.