Ferrari’s Leclerc on pole in Austria

Spielberg Austria offers 10 corners and 2.6 miles in the form of the Red Bull Ring and the Ring plays home to the Austrian Grand Prix. Unlike the French Grand Prix, the Red Bull Ring is a fast affair with limited run-off areas and as Valtteri Bottas and Max Verstappen discovered on Friday, the wind can be a real issue as the two kissed the wall.

The race will see Carlos Sainz and Alex Albon at the back of the grid due to changes for new engines. The weekend would also represent the 300th grand prix for Alfa Romeo’s Kimi Raikkonen.

First out were the Alfa’s and for Kimi’s 300th grand prix, he was looking for a good result. He was two tenths slower than his teammate, Antonio Giovinazzi. Could the Haas F1 duo somehow manage to find some pace on F1’s shortest track? With Kevin Magnussen leading Romain Grosjean, the two made their initial runs with Magnussen jumping to the top of the time sheet followed by Renault’s Nico Hulkenberg. Both were eclipsed by Lando Norris’s McLaren.

Lewis Hamilton and Charles Leclerc were nose-to-tail on their initial laps and it was Charles who took top time but he was not sure how he managed to make the lap work being so close to Lewis. In hindsight, the tow was a real key for several of the cars on Saturday.

The Dutch fans lit up with cheers as Max Verstappen jumped up to third quickest behind his teammate, Pierre Gasly, as Hamilton quickly pushed him down to 4th and Vettel pressed harder to move Max to 5th. The Ferrari’s were leading the session with seven minutes left. Hamilton was in 4th and Bottas in 7th.

As the time ticked away with 2 minutes left, McLaren’s Lando Norris jumped to 4th and Carlos Sainz and Antonio Giovinazzi jumped ahead of Hamilton which sent both Mercedes back out for a final run.

Toro Rosso’s Danill Kvyat ran into a parking lot during his final run leaving him in the elimination zone while Verstappen jumped to the top. A shame for Daniil as his teammate, Alex Albon, made it into Q2. The stewards would review the Kvyat situation after the session with the focus on Russel as well as taking a look at Lewis Hamilton possibly blocking Raikkonen.

Norris and Giovinazzi had very good runs and it makes you wonder about the pressure Antonio is under as he’s seemingly turned his season around in the last two races. Gasly had a good run but when Verstappen made his last run, he was sixth tenths quicker and that’s got to take the stuffing out of you. What does Gasly have to do to find the pace relative to Verstappen?

The session started with both Mercs out on Medium compounds. The Ferrari’s were out as well and a tailwind had crept up in turn 9. Lewis set the top time but was eclipsed by Bottas by 2 tenths. Verstappen then dislodged both Mercedes by going a tenth quicker and taking the top time.

The Ferrari’s were very smooth with Charles Leclerc and Sebastian Vettel taking top times on the Soft compounds. The Red Bull’s were running split strategies with soft compounds on Gasly and medium’s on Verstappen. Pierre was still only 6th quickest.

Alfa Romeo’s Raikkonen and Giovinazzi were both in the top 10 while Renault were languishing in the elimination zone. With 4 minutes left, Mercedes sent both cars out on Medium compounds. Lewis was leading Valtteri this time and Lewis was continually asking his team where other cars were so he could get a tow. He then backed out of his hot lap letting Valtteri go by. Bottas jumped up to 4th.

Kevin Magnussen aborted his lap and did so in front of Lando Norris who aborted his lap. As the session ended, Ferrari were committed to starting the race on Soft compounds with Merc and Red Bull on Mediums so that would be an interesting strategy but would it work? Ferrari gets their pace on the straights and not the corners so maybe the Soft/Medium strategy will work.

As the session ended, there was a discussion in the Ferrari garage with an FIA official and Mattia Binotto watching as mechanics feverishly worked on his Sebastian Vettel’s car.

Out in Q2- Sainz, Ricciardo, Grosjean, Albon and Hulkenberg

As the session started, Ferrari were still beavering away on Vettel’s car. It was both Alfa’s out early while Ferrari, Red Bull and Mercedes all waited. Raikkonen managed to pip his teammate by taking the top time with a 1:04.734s.

With 7 minutes left, Mercedes came out with Lewis leading Bottas again and that wasn’t making him happy as he desperately wanted a tow. He slowed down dramatically hoping Bottas or Norris would go around him but when they didn’t take the bait, Lewis stormed off breaking any chance for Bottas to get a tow off of him. It was a brief provisional pole as Leclerc jumped to the top and Verstappen splitting the Mercedes leaving Lewis in 4th.

Meanwhile, Vettel’s car was still being worked on and eventually Vettel got out of his car and the session was over for him. It’s not what he needed on a weekend that Merc looked vulnerable. At this point, the weekend was being set up for Charles Leclerc. Could he hang on to pole position for Sunday’s race? Could this be his first grand prix win for Ferrari? Or would he lose pole in the final runs in Q3?

With 1:34s left in the session, all the cars came out except Vettel. Traffic was difficult with all the cars backing off on the final corner before starting their hot laps and looking for tow’s off the cars in front of them. A bottled-up final run for the entire field.

It was Charles Leclerc on pole with Hamilton behind him and the orange sea of Verstappen fans going crazy for their man Verstappen in 3rd. It is Ferrari’s first pole in Austria since Michael Schumacher in 2003.

If Mercedes has a strength of pace through the slow and medium corners, then perhaps one could argue that with only 10 turns, this track was going to be a struggle for the Silver Arrows. Ferrari, finding their pace on straights, might be in a position to win but the real key is the strategy as they will start on soft compounds versus Mercedes being on mediums. However, you can’t count Max Verstappen out, he could be a spoiler for Ferrari or Mercedes. 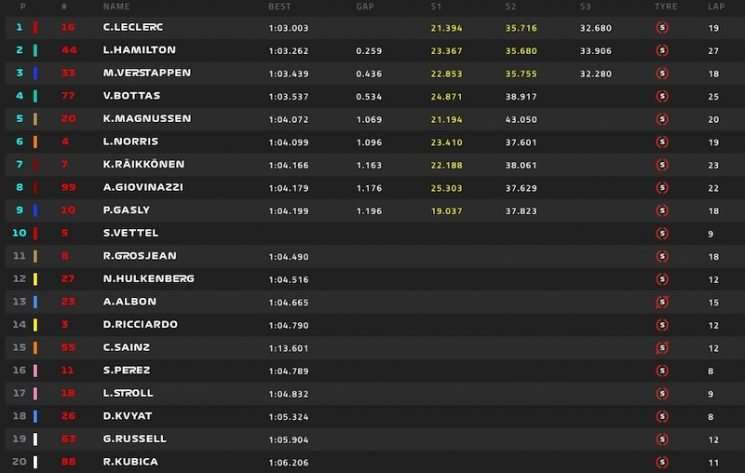 Better entertainment. Leclerc is impressive. He and Hamilton could have gone faster after both botching T3 yet they still managed front row times. In car of Magnussen‘s lap showed he got the most out of the car. T1 and T3 are exciting turns. They beg the driver to go deep and punish them if they go the least bit too deep. As a Ferrari fan I like seeing Hamilton farther back but don’t agree to how it was handled. The infraction occurred early in Q1. While drivers should pay for their mistakes they should also be given the opportunity to… Read more »