According to F1 journalists on Twitter, there will be no further action taken against Sebastian Vettel for his part in the incident between himself and Lewis Hamilton during the Baku Grand Prix.

The FIA reviewed the incident with Vettel and his team manager, Maurizio Arrivebene, as they were concerned about the FIA’s “image” and “reputation” as well as young, impressionable minds in supporting categories. Vettel took full responsibility for his actions and apologized to the FIA with the understanding that he would make that apology public as well.

Vettel will not be able to represent any road safety activities until the end of this year and will have to engage in educational activities over the next 12 months for junior categories of racing.

FIA president, Jean Todt, says that due to the severity of the actions, Vettel will be on a very short leash and any future actions will be cause for immediate action. 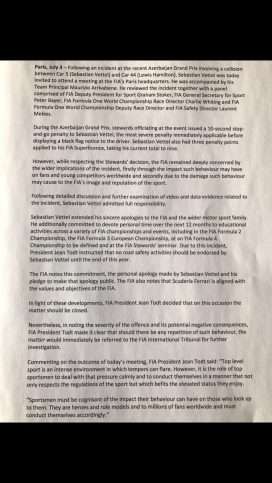 Hat Tip: David Croft for the pic via Twitter

A completely political and pathetic decision. He accepts full responsibility but gets off the hook in return. We all know that the only right penalty was an immediate black flag (and then some). Why did the stewards and FIA rule the way they did ? Politics. They were afraid that the RIGHT decision would influence the outcome of the battle for the WDC, as if that was their problem and not Vettel`s to worry about. The message they sent out is : “if you were Grosjean or Maldonado we would have banned your a_s but since you are a Ferrari… Read more »

Why did you want the decision to influence the outcome of the battle?.
I suppose it is the same mentality as “Guys if Valtteri’s not fighting anyone ahead need to have him slow down, give a bad wake”. Is that the way to win the battle?.

You forgot Bahrain, “Tell Valtteri to let me go by, if I can’t reach Vettel, I’ll give the position back to him” and Lewis never did.

I’m curious if Lewis didn’t have the technical issues and won the race with Seb back in 5th, would this be as big an issue as it is?

In any other race Seb would have been lucky to be in the points at all. Not only Hamilton had bad luck, but only think of all the drivers that should have been in front of Seb after the penalty but weren’t for various reasons: Max, Hulk, both Force Indias, Massa, Kimi …
That surely contributed to the overblown debate about it.

I don`t think so. Like I said, it is political. The stewards only decided to penalize Vettel when Hamilton had to make a stop for the headrest. Otherwise I think there would have been no further action at all. The FIA criteria are extremely variable.

Irrelevant. Take all issues together as they occurred.

“In spite of all this I am still happy, because Ferrari will have no
excuse if they lose the title and the FIA can afford no further favors.”

Great spin, but I suspect you are extremely happy that as a Hamlton fan, you have an out (in your mind) and are already setting yourself up with a convenient excuse as to why Hamilton lost by a slim margin.

Not a Hamilton fan, a McLaren fan. If Hamilton loses the title fight nobody serious will complain that it happened because Vettel did not LOSE any points for this incident. I am just saying that doesn`t change the fact that Vettel is guilty as hell and got away with it because a real punishment would have had big implications on the title fight. It is HIS job to worry about that, not the FIA`s.

My math says, the difference between a race win (no penalty) and 4th place is 13 points, no? If FIA/Stewards are political and in favour of VET/Ferrari, why issue penalty at all?

Well, Vettel DID lose some points through the original penalty. Pretty safe to assume he would have won had he not overreacted. He’s also precariously close to sitting out a race, but not for long. Hamilton fans were calling for a race ban or to have the points he did get stripped. Maybe you think that would be fair as well. I don’t. Of all the on-track incidents I have witnessed in the past few years, this rates about a 0 on my GAS meter. I’m pretty good at putting the shoe on the other foot and if the situation… Read more »

Been a tough FEW years for McLaren fans. I think the spec 3 will make the team a solid midfield team, no more than that. It is worth UP TO 30 horsepower but Mercedes and Ferrari were roughly 100 hp ahead. I really hope reliability will not be an issue with the upgrade. Some people say the McLaren gearbox broke down as often as the Honda engine but the huge vibrations from the engine are destroying the gearbox.

Easy way out to blame Honda for anything that goes wrong or fails that are made by McLaren. Huge responsibility and a Disgraceful pity the damage done to the sports by those of the F1 press being in a position to contaminate the minds of their followers. It (the situation) sure got to absurd levels when one F1 site writer comes out telling his followers TECHNICALLY WHY THE HONDA ENGINE IS SO BAD. (Wonder why Honda didn’t buy his services and know how) He gathers and lumps-up all the previous CRAP SPECULATION (technical) that has been pushed out by the… Read more »

I am sorry, but if you want to be “fair”, you should keep you facts straight! Grosjean was penalised for continuously crashing into cars (not on purpose, but because of lack of talent at the time) and Maldonado crashed into Hamilton at much higher speed causing actual damage to the cars (on purpose AND lack of talent to this day). The Vettel/Hamilton thing was at walking speed, no damage and under safety car conditions (on purpose, sure, but also quite talented I think).

Well lets hope its just back to racing without to many unnecessary incidents.

And now all of a sudden some people (fan-boys) are so bored with their lives, they are getting seriously mentally sick, four prime examples are Will Buxton and Joey Saward, the man at fanatic and the man at JAF1, Up to twenty four hours ago Totd/FIA were really good governance and principles wise, but now they are rubbish and biased. A fake FIA press release announcing Vettel has been disqualified from Baku race was circulated just before the FIA issued their own press release. The stewards gave their verdict during the race in Baku, it should have ended in Baku,… Read more »

Nice… everybody with a different opinion is a fan-boy.

You might enjoy the war that seems to have broken out in the comments section at, as you call him, Joey’s article about this:

The total war that has broken out at the sites of those four is very short lived as all four are blogging their visitors left right and center, so it is hard to catch read the drubbing their visitors are giving them.

A prime example of a vitriolic asshole, pompous and self important, always having a go at those that do not fit his views, he talks down and insults any reader that dare oppose him.

Finally it’s over. Saw a good graphic somewhere, that showed only GB and Spain (and very few other countries) were unhappy with the original penalty. Shows how strong the british press is on Twitter. One thinks what they tweet is what everybody thinks. But it couldnt be further from the truth. In football (soccer) the decision of the referee does not get overruled after the match by the FIFA. Look at the confederations cup final, where a Chilean player hit a German player in the face with his elbow. That led to a yellow card after the referee watched the… Read more »