Grumpy Op Ed: “Most comprehensive Formula 1 survey ever” launched by FOTA and LG.

A new, groundbreaking survey, well formulated, with qualitative questions, that is in no way self-serving or self-defeating. 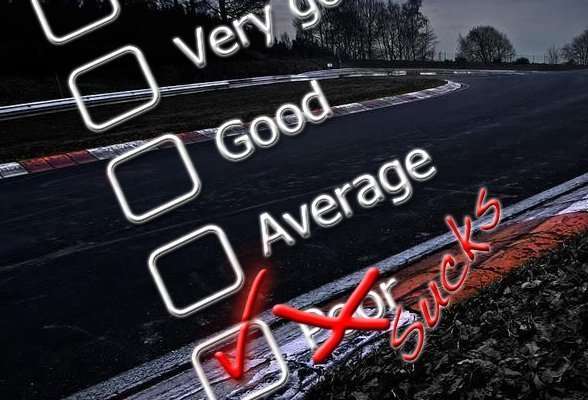 The tingly sense of anticipation begins as early as the opening page.

Commissioned by the sportâ€™s key decision makers, [this survey] offers you a unique opportunity to share your opinions on everything from your favourite drivers to next yearâ€™s rule changes.

The survey wonâ€™t take you long and you may help influence the future of the sport.

Or, as I would prefer it… ‘Commissioned by the sport’s official magazine, an organization that roughly eight months ago was set to storm out of F1, and a Johnny-come-lately sponsor, this survey will actually take quite a while to fill out. Your input may well be ignored, not least because the commercial management company and the sport’s governing body have not put their names to the endeavour.’

This is shaping up to be a long old rant, folks. I apologise, and I had better preface it with three things: I filled out the survey honestly and hope many more people do; I genuinely applaud FOTA for trying; and I am not even close to being a qualified stats or survey guy.

Also, perhaps I’m simply being unfair. After all, it’s not even started yet. And you’ll remember if you read Grace’s preview to this survey, that Martin Whitmarsh was very excited about the content.

Weâ€™ve commissioned what is, in my view, the only broad-based fan survey that will take into account the opinions of those who arenâ€™t hardcore Formula 1 fans. Itâ€™s those fans with a mild or passing interest in Formula 1 that we need to concentrate on, because we can convert them into more avid fans.

Which leads us neatly to the very first set of questions, excluding the survey world’s “starters for ten points”: age, sex, nationality. The first real questions all revolve around one central theme:

How often, and in what ways, do you follow Formula One?

If FOTA wants to focus on those with only a passing interest in F1, what motivation is there for genuine F1 fans – who no doubt want their answers to be heard – to answer any of these questions with even a scintilla of honesty? The survey’s commissioners have already basically stated that you – I’m presuming you’re a rather dedicated fan of the sport if you’re taking the time to read this – are not the primary target of the research. You’re going to tune in and watch, maybe buy some merchandise, and maybe keep visiting blogs like these for the long haul, come what may. So your answers are irrelevant, and can now be neatly filtered out, if so desired.

The final question before I move on was raised by our very own Paul Charsley in an email discussion – I hope he doesn’t mind me sharing what Google already knows:

WHO IN GOD’S NAME WHO ISN’T INTERESTED IN F1 WOULD FILL THIS OUT?!

Hear, hear! I may well have miscounted, but I believe you must tick a minimum of 158 boxes (even if I went way wrong, it’s probably over 150) before you reach the end. Anyway, you get the point. It’s long, it’s in depth, it’s probably a major turn off for the casual observer. I hope the organisers are paying, or otherwise incentivising, some of their “target market” to spend some time on this.

Most of the remaining topics are reasonably sensible, to be fair. General themes include things along these lines:

Which tracks do you like?
What aspects of the sport captivate you/are most important to you?
Which teams/drivers do you follow, and for how long have you been a fan?
Would you advocate more driver involvement and overtaking or fewer limits on technological advancements?
What was your favourite moment of the 2009 season? (Mine wasn’t in the options list for that one, but it’s fairly comprehensive all the same.)
What changes would you most like to see in terms of broadcasting, online availability, driver interaction, etc, etc?

Now, back to stuff that I – grumpy as I am on this otherwise fine evening – object to within the survey. Firstly, it’s the back-slapping nature of so many of the questions. For example:

Which THREE of the following words/phrases do you think best describes Formula One?

Predictable. That’s the only negative in the entire list. I suppose that’s predictable. Now, I realise this question is more about assessing the sport’s perceived strengths than its weaknesses, but take ‘accessible’ as an example: Who in their right minds would answer with that word? Media coverage is limited by contract, tickets are expensive, races are rare – by necessity, and the costs for competitors are astronomical.

I suspect the whole reason FOTA included the word is in a bid to prove to Bernie, FOM, and the FIA that nobody answers with ‘accessible’. But if that’s the case, why not just be honest and give the option “inaccessible”? I would have ticked it in a heartbeat! And they’d have received some useful data! But it would have looked bad in the final results’ press release.

There are a host of similar questions which are seemingly designed to encourage either positive feedback, or very little at all. To paraphrase heinously and exaggerate absurdly, the questions could almost read:

How much do FOTA (and LG) rock?

Don’t know — Not much — A little — A lot — Really rather a lot — As much as a crazy fusion of Metallica, Zeppelin, Hendrix, the Stones, Beatles, Kinks, plus my five personal all-time-favourite bands, all playing a set of my choosing, live and in their prime.

Would-be naysayers can only ever answer negatively to a positive question, by saying ‘no’ to something like: “Is it important, in your view, for FOTA to have more influence in the direction of F1?”

There’s the same problem with the extended section asking about sponsors. I realise that FOTA is in the business of selling small amounts of sponsorship at high prices. Heck, some FOTA members currently would like to be in that business, but have somewhat failed to break into it for 2010. They want and they need proof that sponsorship works. And in a way, as I hope that F1 succeeds, I’d genuinely like to give them that information.

But it would taste a lie to say that I only buy products advertised at race tracks, that I currently don’t eat due to the lack of supermarket sponsorship, that I only smoke a certain brand of cigarettes that may or may not remain on a car’s livery in disguise, or that my banking decisions are based on team sponsorship rather than branch availability and interest rates. So, I didn’t say it. As for the set of LG related questions, don’t even get me started.

The big question is what does this have to do with what’s being billed as the most comprehensive F1 survey for fans of all time, designed to help revolutionise the sport? For whose benefit is it really, and did those people kind-hearted and dedicated enough to fill it out just waste their time?

Now, stop reading my bile, and go fill out the survey already. (Though as I’m feeling cheeky, I’d recommend you say you’re a female pensioner from Senegal who hardly ever watches the sport, and proceed to answer entirely honestly from there on in!)