Haas F1 have released their new Formula 1 car for 2019. In short, it reminds me of the Renault/Lotus/Genii Capital days. The color change, away from Haas F1 corporate colors, is due to a new title sponsor called Rich Energy.

The launch car is a version of the new 2019 car but expect several changes when it is set on the grid in Australia. I can’t lie, I love the Stag logo though.

LONDON, England (Feb. 7, 2019) – Rich Energy Haas F1 Team unveiled its new-look for the 2019 FIA Formula One World Championship with a livery launch hosted at the prestigious Royal Automobile Club (RAC) on Pall Mall in London, while the design of its VF-19 challenger debuted online across the team’s website and social media platforms. 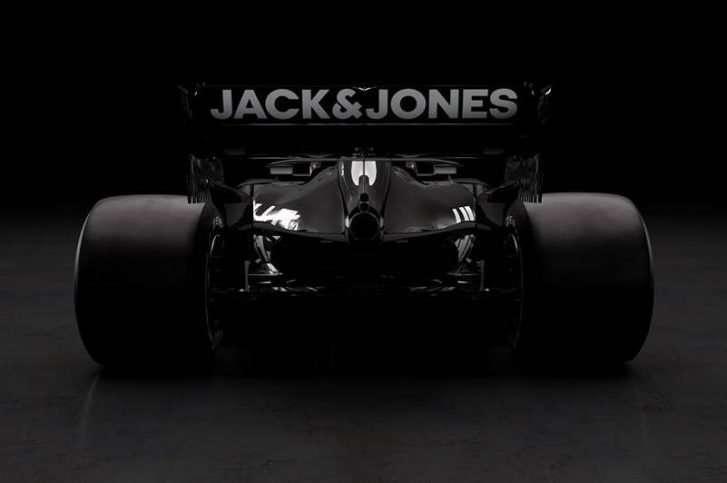 Incorporating the resplendent black and gold colors of Rich Energy, the premium British energy drink first announced as title partner of Haas F1 Team in October 2018, the 2019 livery was revealed on a show car in London as drivers Romain Grosjean and Kevin Magnussen, together with team principal Guenther Steiner and Rich Energy chief executive officer William Storey, peeled back the covers before a throng of assembled guests at the RAC.

In addition to the infusion of Rich Energy’s branding, Haas Automation maintains its prominent placement on the VF-19, the familiar light gray tone associated with the three previous liveries have been carried over in the decals on its latest entry, one which will look to build on the success of the VF-18 which carried Haas F1 Team to a fifth-place finish in the 2018 constructors standings. The VF-19 continues to sport the branding of team partners JACK & JONES, PEAK, BlueDEF, Richard Mille, Alpinestars and Pirelli.

“This is the time of the season when you hope you’ve got designs right and you can be competitive straight away,” said Gene Haas, founder of Haas Automation and chairman of Rich Energy Haas F1 Team. “The new car looks distinctive, not only in terms of its color scheme, but also with the new regulations in play. Hopefully those design changes brought in for 2019 will improve the racing on-track, and more importantly give us a shot at making more of an impact at each Grand Prix.” 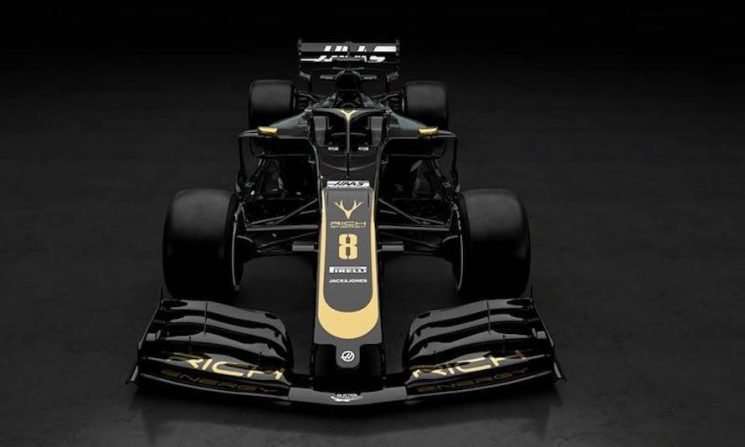 Team principal Guenther Steiner commented; “It’s important that we keep progressing as a team, and this season is no different. Our partnership with Rich Energy is another positive example of moving forward as an organization. We’re pleased to see their colors on the VF-19, we welcome them as they join our valued partner group in utilizing Formula One as a global marketing platform. While 2018 delivered our best season to-date, the year showed, sometimes sharply, that we still have areas to improve on as a team. On-track, our push for performance started early with the VF-19, our next step is to get to Spain and utilize our time there wisely to prepare for Australia.”

“I’m naturally delighted to finally see the Rich Energy colors and stag logo in Formula One with Haas F1 Team,” said William Storey, chief executive officer of Rich Energy. “Partnering with the team has already significantly raised the profile of our brand, this livery unveil will again elevate us to another level. It’s fantastic to see the VF-19 decked out in black and gold, with Romain Grosjean and Kevin Magnussen similarly attired. We’ve worked closely with Haas F1 Team to ensure we present a strong look, one we’re now very proud to take around the world competing in Formula One.”

The digital renderings of the VF-19, in addition to showcasing the team’s new color scheme, also display the impact of the new season’s regulation changes. 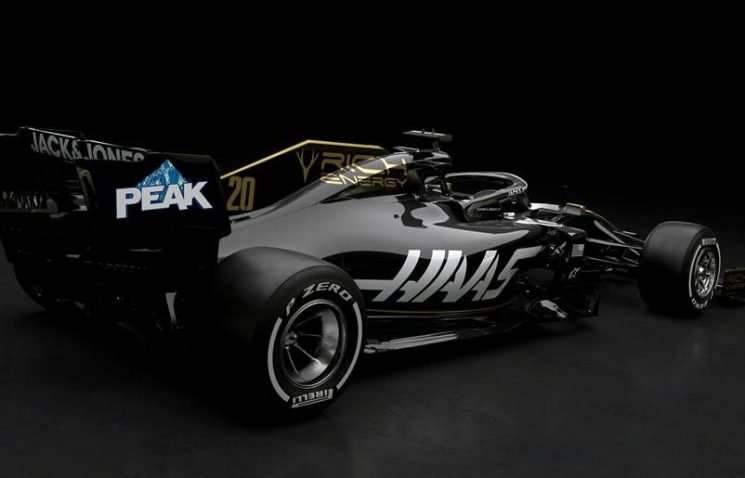 The simplified front-wing is evident, now 200mm wider and 20mm higher – designed to allow drivers to follow each other more closely and increase the possibility of overtaking. Similarly, the rear wing has been made simpler, as well as 20mm higher and 100mm wider, to aid slipstreaming and promote closer racing. Smaller, repositioned barge boards are also visible, reduced in height by 150mm and moved forward by 100mm, these have been designed to improve air flow from the front wing making them less aerodynamically disruptive.

The physical unveil of the Rich Energy Haas F1 Team VF-19 will take place at 8 a.m. on Feb. 18 outside of the team garage at Circuit de Barcelona-Catalunya. Formula One pre-season testing will run from Feb. 18-21 and again Feb. 26-March 1 at the Spanish track before the season-opening Australian Grand Prix March 17 in Melbourne.

I remember when Lotus changed from the black and gold JPS livery to the yellow of Camel. Mechanics were happy for such a bright change. Good to see they got more sponsorship.

Agreed on sponsor. Although, there have been a few raised eyebrows over rich Energy and I read a bit of an odd interview with them at Autosport today. People still questioning if they have the resources to be this heavily leveraged in F1.

As a dot com survivor, I learned to be very, very wary of companies that talk incessantly of brand. Especially ones that don’t have much else to talk about.

It’s a good point. Red Bull built a brand around a product that launched and industry. There is every right to be protective and to speak of their brand with gravitas. Same for Apple, Addidas and others. If you take my hobby, guitars, you can see Fender, Gibson and amps like Marshall and Vox. All brands that created space in an industry and owned it. Rich Energy will have to have a product that creates space otherwise you’re speaking a lot about brand and brand-building while simply trying to make the pieces of the pie smaller for all the players.… Read more »

I’ve already seen an article with them crowing they’ve had some European distributors “delisting” Red Bull. Yep. It’s called, “You carry their shite, and we drop you.” How would you like to face Red Bull dropping you in favor of an unknown sugar water brand? Maybe an obscure rural Romanian distributor or two. Otherwise, forget it. This is a Chihuahua looking to play with the big dogs. Might could get bit.

You’re right, it does remind me of Renault / Lotus. Negative points for lack of originality.