Haas F1 made a brief statement today announcing that they are firing Nikita Mazepin from their program. Haas terminated their sponsorship with Uralkali and the contract with Nikita as a result of the Russian invasion of Ukraine.

There may not be many tears shed over the ousting of a Russian oligarch who is said to be tight with Russian premier Vladimir Putin nor for the oligarch’s son, Nikita, who is a driver for the team.

Nikita wasn’t exactly at Haas on merit but he was cutting his teeth and learning how to drive in F1 and in many cases, it’s the same for all drivers who make it to the top. The counter argument might be that he didn’t make it to the top, his father paid his way to the top. That would be a more realistic read of the situation if I’m honest but the same could be said of many drivers in F1’s history. 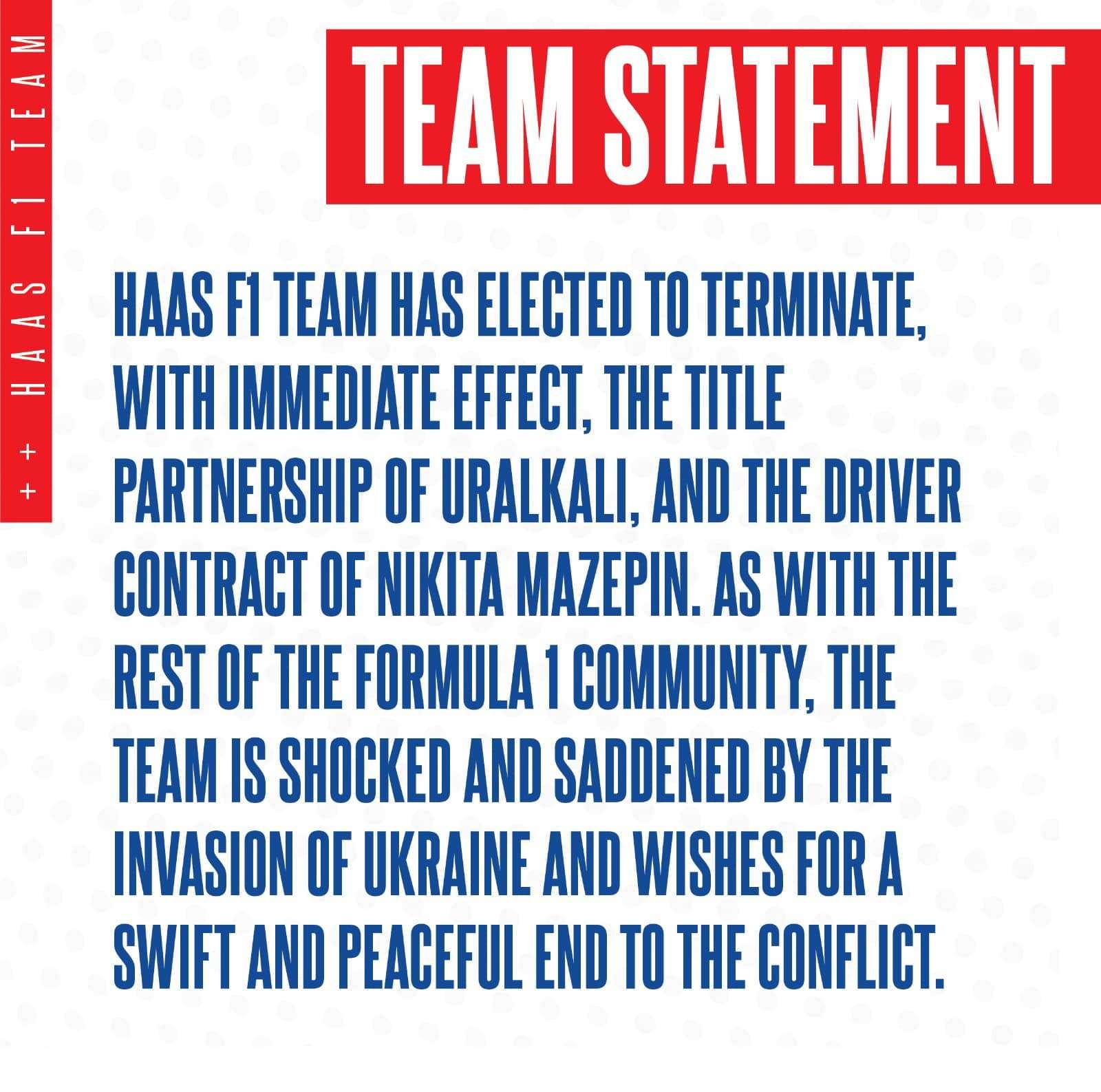 However, the move does suggest a sort of “sins of the father” situation. There are ties to the government and even Nikita’s part-time training in what we in the US would call the reserves. Is all of this enough association to cancel a contract? It would seem so.

While the move has been applauded by many, there are also those who feel it is a double standard when F1 is willing to overlook other human rights actions perpetrated by other nations.

The motorsport world is watching very closely as the world finds it remarkably easy to target a nationality on an individual basis irrespective of their involvement in their own governments actions. Some fans have pointed towards Guanyu Zhou from China and from comments I’ve read, depending on where you are from, there are cases being made about American drivers, British drivers or others who they deem as aggressor Nations engaged in the actions violating human rights.

There is certainly room for perspective in these times and the rush to judgment doesn’t end with drivers or sponsors. The call for canceling races has also become a continuous sound as the Russian Grand Prix was canceled and calls for other Middle East races to be jettisoned from the calendar persist.

Everyone enjoys judging but when judged, things become slightly different.

Without trying to bang a drum needlessly, while everyone is busy banging on about Russian buisness involvement with F1 teams. Has anything been announced by Ferrari regards their sponsorship from Kaspersky?

I’ve not seen anything.

The other read would be that the only reason Haas continued with Nikita was because of Uralkali’s money. Sounds like they terminated the sponsorship before they were forced to do so, and took it as an opportunity to release Nikita.

So I’m super against this invasion (i’m a veteran w two children in the Army) and i certainly dont think much of Maz but is it a little weird to be seizing people’s assets and firing them because of their nationality? I mean when China unleashed a plague on the world it was all stop anti Asian sentiment (i agree) but is taking people’s yachts and banning athletes eerily 1939 or what? I’m not sure, just wondering why all Russians are guilty by association. I mean its only 20 years ago it was us invading a country for no flippin… Read more »

I’ve seen many folks say that Nikita’s dad is best friends with Putin, that he’s funding the war and many other accusations but I’ve not read anything that really discusses the relationship or how entrenched they may or may not be. I’ve no way of knowing. I see EA sports is taking Russian players/teams out of their FIFA game. I’ve seen politicians suggest all Russian students should be rounded up and sent back to Russia. These seem like bad ideas to me as I’ve known Russians and Ukrainians who were very nice, respectable people.  No one I know or have… Read more »

This is tough…. On the one hand it’s very unfair that Nikita’s dreams are ending because of his nationality. If that happened to one of our sons or daughters we’d all be devastated. On the other hand, it’s war, and many people will lose their dreams, their loved ones, and their lives…on both sides. The truth is, war just sucks.

No doubt he was in the deep end without water wings.

Devil’s Advocate: The same could be said about Stroll, but he’s turned into a capable driver. Money bought the opportunity but not the ability. ~X8

Indeed. there are a few cases of that in the past for sure. Not just in F1 either, across all of motorsport.

Remember “Freedom Fries” anyone? Strikes me as a similar knee-jerk reaction across the world. The difference here is that maybe the world reaction can have an effect (whereas Freedom Fries did noting).
That said, he’s hardly an important addition to F1….

Had to Google it, some weird American thing about not understanding political correctness.

Wouldn’t it be great if they gave Jamie Chadwick a go? ~X8