The VF-18 is an evolution of the team’s second car, the VF-17, which carried Haas F1 Team to an eighth-place finish in the 2017 constructors’ championship.

Incorporating “VF” into the name of the car is a nod to the history of Haas Automation, the team’s title sponsor. The first CNC machine manufactured by Haas Automation was the VF-1 in 1988. The “V” stands for vertical, which is an industry standard designation for a vertical mill. Gene Haas, founder of Haas Automation, added “F1” to the name to unofficially designate it as the company’s “Very First One”.

“People see what we can do in Formula One and people believe Haas Automation can build world-class machine tools,” said owner Gene Haas, whose entry in 2016 became the first American Formula One team since 1986. “Being a Formula One participant brings a level of credibility that you just won’t get through traditional advertising.”

“We eliminated a lot of the variables where we knew we were weak,” Haas said. “We’ve focused on what it’s going to take to get our car to be consistent and close that gap to the top teams.” 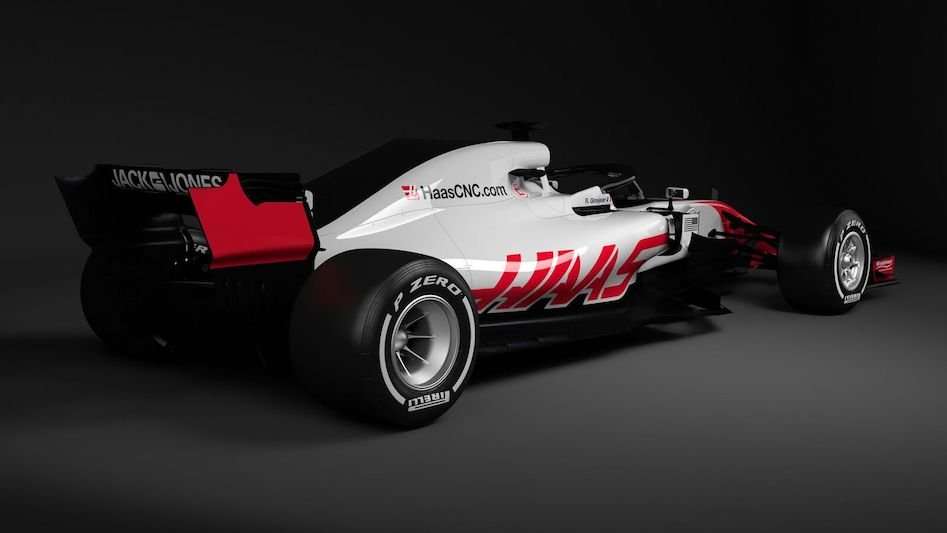 Beyond refinement, the VF-18 carries the significant addition of the halo and a drastic reduction in the sharkfin.

“The biggest part of the car’s evolution was the addition of the halo,” said Guenther Steiner, team principal, Haas F1 Team. “It took quite a bit of study by the aerodynamicists, but the designers had to work hard to modify the chassis so the halo could survive the mandated loads. The total minimum weight of the car increased because of the halo, and there’s a higher center of gravity simply because of the halo’s position. But, everyone is in the same boat.

“The regulations stayed pretty stable between 2017 and 2018, so the VF-18 is an evolution of our car from last year. It’s less about reinvention and more about refinement. You see elements we had from last year on the car this year.

“Our 2017 car was actually pretty good, but we didn’t always get the best out of it, and that’s what we aimed to change in 2018. We got the car as light as possible to carry more ballast. We were able to do a better job of putting the weight where we wanted it.” 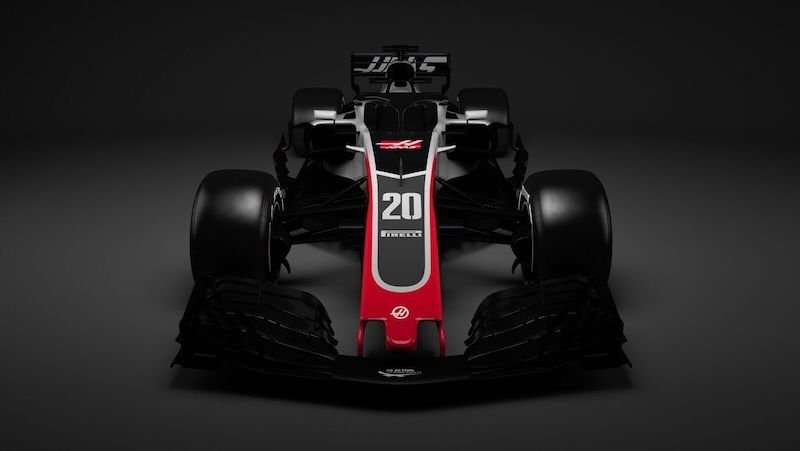 The corporate colors of Haas Automation were carried over to the VF-18. Gray makes up the majority of the livery, augmented with tones of red and black that incorporates the look of Haas Automation’s complete line of vertical and horizontal machining centers, turning centers and rotary tables and indexers. Approximately 1,300 employees encompass Haas Automation, with the Oxnard, California-based company exporting its machines to more than 60 countries. The VF-18 showcases Haas Automation’s commitment to technology and innovation to a passionate, global audience. 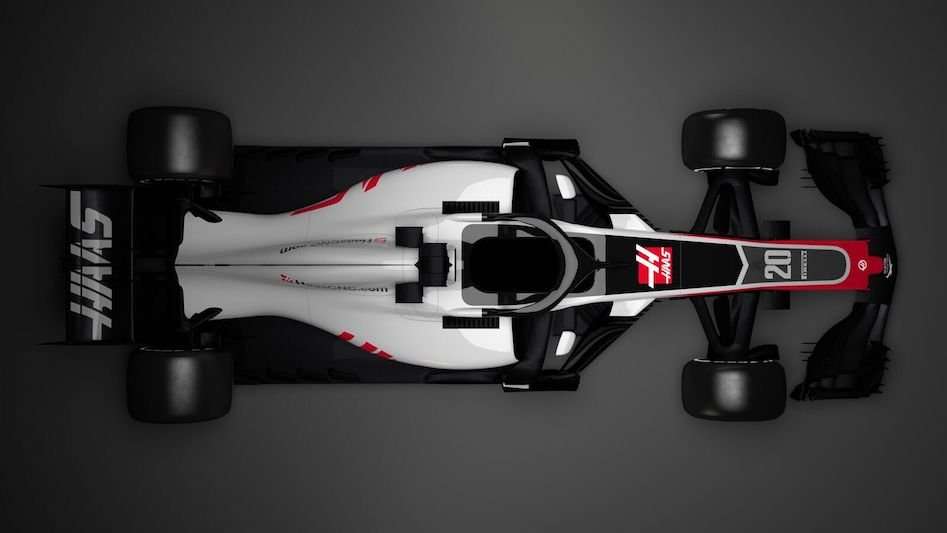 If you really want to go to that level of technicality, wouldn’t it be the chassis/halo mounting points? I’m sure the chassis can already handle 15 tons, and the Halo was designed too as well, so the potential weak point would be the mounting points.

Not that I actually care.

It might also be how the load is transferred around the chassis from the mounting points.

I would guess Steiner was meaning the halo ‘system’, which may include the chassis. It doesn’t matter if it was the thong or chassis that failed, in the end the system failed. Look at how when a mirror or suspension gets torn off the chassis we would say the mirror fell off or the suspension failed when in fact the chassis or chassis mounting point failed. It’s more of a layman’s observation vs a purely technical observation.

So an Italian speaking American English gets it a little wrong…. it appears we all understood what was meant, let’s give the guy a break!

Gene, the 70’s called and they’d like their logo back.

Seriously, we complained about F1’s new logo, but Haas’ logo is so antique it should come with a certificate of authenticity.

VF-18 rendering pretty much an SF-70H evo. it is only cosmetically different then last years FERRARI. very detailed for a launch spec.

It’s certainly very similar to the VF-17.
The profile and plan are similar to the SF-70, apart from the barge boards in profile. Though in the launch photos Haas have been careful not to show the sidepod intake shape and position.

Yes, I’ve seen some other pictures now, and it is a lot like the SF-70. Hopefully its as quick, and stops as well!

I am one proud owner of by now an antique VF1 of which is still going as good as when new after I don’t know of how many moons I had it. A Dutch man friend of mine said that Haas VF-18 now have a “hare” logo on bargeboards, I had a look and to me it is a “white rabbit” logo. but I understand that my friend calls it a “Hare” because he is Dutch. Anybody knows what it is there for? any idea what company this is?. Is Gene Haas family of Dutch Origins?.

Looks like a jackrabbit (also known as a hare) which are known for their speed. I used to see these a lot while hunting in California as a kid. These buggers can also get pretty big for a rabbit (2-3 feet tall when standing). I couldn’t find any sponsorship logos that look even close so maybe they are just foreshadowing their upcoming speed.

Hass is the dutch word for “hare” or “rabbit” and also has the connotation of “pacesetter”.

The anti-hybrid lobby must be delighted, they wanted a V8 and Haas give them a VF18 ;-)
The lighter grey looks good, and I see there is still a small sharks fin carrying the car number, but evidently no t-wing (yet)

JAKO. Still trying to figure out when you about to come and go when talking with you, different time-zones and work duties. Last time we were talking ‘Sauber/BMW Sauber/super computer/CFD/wind-tunnel” (on mclaren and Dell join forces page) you must have missed my last two posts to you (2 must read links). Add to that another two link “how wind tunnel work-F1 explained-Sauber F1 team” bellow that you-tube film klick on “infographic download see how link below” published oct 24- 2014. Also of interest “JAF1 insight F1 wind tunnel technology reaches amazing new levels” (posted by JAF1 12 Feb-2018. Explanations by… Read more »

Hi Sunny, a man of mystery that’s me!
This WordPress software doesn’t make it as easy to track comments, responses, or people as the discus software.
Thanks for those links, I’ll check them out.
Have you come across the ‘missed apex’ podcast? They seem to be a bit of a mixed bag of different presenters and formats, but the tech ones with ‘summers’ are excellent – he can even talk about the halo system in a knowledgeable and balanced way.

How about that…
The Genether got his car first at something!

Beautiful photos. Photographer knew exactly what he was doing, with the lighting and black background that allows the beauty of the cars sans the stupid clipped “banned” sharkfin and ugly-ass HALO to virtually disappear.

Unfortunately, only achievable with lighting and skilled photographer.

Actually, I find the photography incredibly annoying (not unskillful, just annoying) because there’s no contrast and I can’t see any of the details of the bodywork…

No, they are skillful and done for the reasons I have described. They were not engineering photographs to be scrutinized but beauty shots. Successful ones at that.

I think we went to the track as soon as…

Are these changes immediate?

I know he knows about the Sky commentary. :) I…

Bit of a story, but a few years ago, we…

He's always been a diva. Now he's getting older the…

Regarding Lewis' motivation, I think he might go through the…

Lewis is an amazing driver, but he's become accustomed to…

I have question for Paul. I made a joke on…

This website uses cookies to improve your experience while you navigate through the website. Out of these, the cookies that are categorized as necessary are stored on your browser as they are essential for the working of basic functionalities of the website. We also use third-party cookies that help us analyze and understand how you use this website. These cookies will be stored in your browser only with your consent. You also have the option to opt-out of these cookies. But opting out of some of these cookies may affect your browsing experience.
Necessary Always Enabled
Necessary cookies are absolutely essential for the website to function properly. This category only includes cookies that ensures basic functionalities and security features of the website. These cookies do not store any personal information.
Non-necessary
Any cookies that may not be particularly necessary for the website to function and is used specifically to collect user personal data via analytics, ads, other embedded contents are termed as non-necessary cookies. It is mandatory to procure user consent prior to running these cookies on your website.
SAVE & ACCEPT
wpDiscuz
21
0
Would love your thoughts, please comment.x
()
x
| Reply
Comment Author Info
Report this comment