Even though Lewis Hamilton led all three practice sessions over the US Grand Prix weekend—making him the first driver to do so this season—he was just nine thousandths of a second between his arch rival Sebastian Vettel in FP3.

How much did Ferrari have in the bag and could Lewis secure pole in his quest to be the most winning driver in the US Grand Prix with a sixth win on Sunday? Pole would go a long way to making that happen.

Regardless of Hamilton’s quest, Ferrari are entering the weekend on the back foot with a 59-point delta in the Driver’s Championship and if they lose to Lewis by sixteen points, the season is over. After mechanical failures in the last two races and a teammate collision before that, Vettel had leaked all of his championship lead while the team was leaking its dignity. They needed a return to form and it had to happen this weekend.

Initial runs from Mercedes found Valtteri Bottas on top of the time sheet followed by Esteban Ocon’s Force India car. Max Verstappen was mired in traffic on his first run and bailed out in order to make another run in clear track.

The McLaren, in the hands of Fernando Alonso, looked absolutely planted in the esses but even so, the lack of power meant a deficit in straight line speed but he did manage to throw the car up in second for a brief moment.

There was a very serious moment when Romain Grosjean had to take evasive action as Lance Stroll was dawdling on the race line during Romain’s hot lap. Max’s second run placed him in 2nd but he was facing a 15-spot penalty for a gearbox change. Once again, all the Verstappen fans are deprived of a great run due to engine penalties. Once again, this series has become an engineering championship with penalties designed to punish teams at the expense of drivers and fans.

Watching the onboard video of both Hamilton and Grosjean, the difference in how much steering input the two had in the esses was night and day. Lewis’s car looked planted, Grosjean was see-sawing all the way through.

Brendon Hartley nearly made it to Q2 but was pipped at the last moment while his teammate, returning to the car after being benched by the team in the last two races, made it to Q2. Carlos Sainz also looked good in Q1 besting his new teammate at Renault as he made his debut for the team this weekend.

Ericsson, Stroll, Hartley, Wehrlein, and Magnussen were all eliminated in Q1.

Initial runs in Q2 found the Mercedes completely hooked up on pink tires setting the pace with Lewis claiming the fastest lap of the weekend followed by Bottas. Vettel was eight tenths off the pace of Hamilton on the Ferrari’s first run.

With 3:40 to go, Daniil Kvyat took to the track but Nico Hulkenberg didn’t make any runs as he has a mass of grid penalties already so the team saved the engine and tires. This is silly but I said it would be way back in February. Alonso had an incredible lap to make it to Q3 and was running new kit that Vandoorne did not have.

Grosjean, Kvyat, Hulkenberg, Vandoorne, and Massa were all eliminated in Q2.

The talking point in Q3 may have been pole but it must be said that Carlos Sainz’s appearance in Q3 was a great sign that the transition from Toro Rosso to Renault has been a good move.

It was a tall order for Sebastian Vettel to take pole position given Lewis Hamilton’s pace all weekend. Initial runs found Lewis on top followed by Bottas and then Kimi Raikkonen at +0.460s and Vettel at +0.759s behind Lewis.

The final runs all started with just 45s left and Vettel leading the way. Vettel set a 202mph in the speed trap and that was 2mph down on the Mercedes. His last attempt improved his time but didn’t take pole. Sebastian did trim his delta to just +0.239s to Hamilton and prevents a Mercedes lockout on the front row. 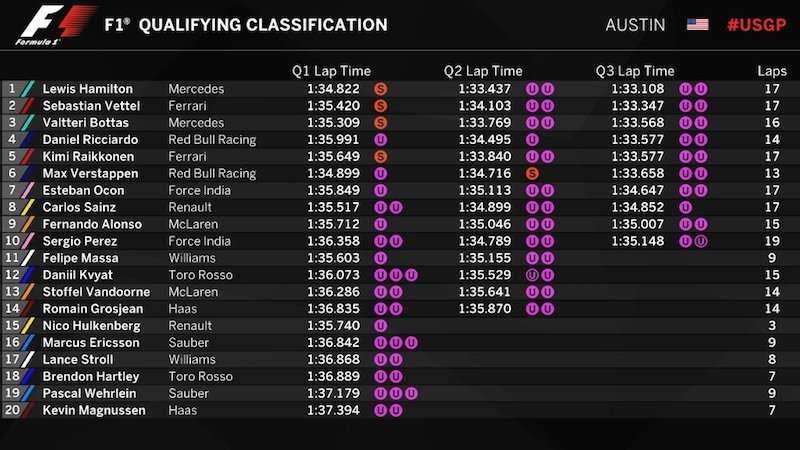