Lewis Hamilton claimed pole position for the United States Grand Prix (USGP) by pipping his teammate, Nico Rosberg who will start second on Sunday’s race. The duo was sparring with each other over sector times but in the end, Lewis pieced together a fabulous lap and pole.

Ferrari’s resurgent performance two weeks ago in Japan seemed to fade as Red Bull clawed back performance on the Circuit of the Americas (COTA) to beat them to 3rd and 4th.

Qualifying started out with an interesting run from Mercedes on Supersoft tires. Realistically they didn’t need to but it seems they have a plan in mind. Lewis led the first session and while that may be an interesting decision, I was more confused by McLaren’s decision to leave Jenson Button to the last minutes to make a run on Supersofts. Ultimately there was traffic and he was out in Q1.

Another interesting run from Force India’s Nico Hulkenberg who beat both Ferrari’s in Q1.

Red Bull split their strategy with Max Verstappen on soft tires while his teammate, Daniel Ricciardo, ran on the Supersofts. Ricciardo topped the list with a 1:36.255, just ahead of the Mercedes cars, after his first run. Red Bull could force Mercedes to mark both cars altering strategy to cover Max and Daneil and especially if they have good long-run pace.

Carlos Sainz, who had two flat rear tires in FP3, nipped 8 in Q2 and bumped Fernando Alonso out followed by Felipe Massa who bumped Force India’s Sergio Perez. That’s a good performance from both Williams making it to Q3 with only one Force India, Nico Hulkenberg, in Q3.

Mercedes came out for their first run with Nico Rosberg leading the way just ahead of his teammate, Lewis. Lewis pipped Nico by just .072s with a 1:35.370. Max Verstappen’s Red Bull was third with both Ferrari’s behind him. If that wasn’t exciting enough, Daniel Ricciardo jumped his teammate, Max and slotted right behind the Mercedes duo by 0.5s.

On their final runs, Lewis radioed some strange shifting in 7th gear. Nico Rosberg was flying and if there was any issue, Hamilton didn’t show it as he was flying even faster in the first sector. As they came around to take the flag, it was Lewis Hamilton with a stunning lap of 1:34.999 and pole position.

Ferrari’s Kimi Raikkonen beat his teammate, Sebastian Vettel, for 5th but lost 3rd and 4th to both Red Bulls. Nico Hulkenberg’s Force India managed to hold off both Williams cars for 7th. 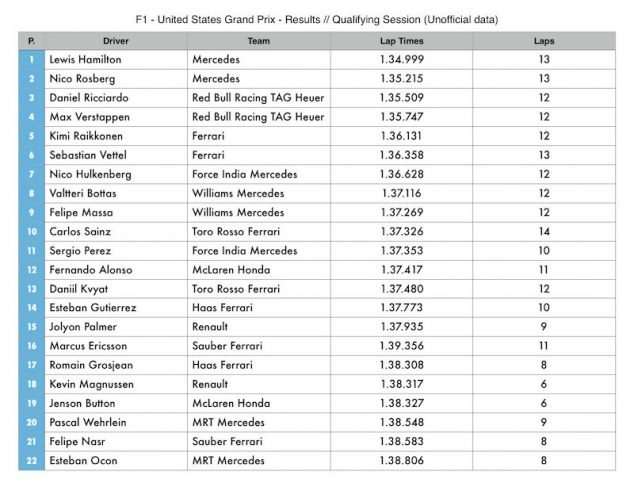