Qualifying was going to be an interesting affair given that both Mercedes spun during FP3 and seemed to be struggling to find car balance and pace for the Hungarian Grand Prix. The Red Bulls were intent on capitalizing on the short, tight circuit and their penchant for tracks that require less power in order to find the second row in which to start Sunday’s race from.

Only 14 times out of 32 occasions has a pole-sitter won but that doesn’t mean pole position isn’t important and Ferrari seemed to have the pace to give it go and seek redemption from a miserable German Grand Prix.

A rain just prior to Q1 meant the track was in a changeable condition and drying out. The key would be a drying track and when the crossover point would be for dry tires. Ferrari looking for their 500th front row start and Lewis Hamilton looking for his 6th pole position in Hungary.

All cars were out early on intermediate tires to get in their banker laps. Bottas and Hamilton set initial times followed up by Raikkonen and Vettel with Ferrari taking top two spots. The drying track was creating heating issues for the intermediate tires early and while Vettel felt it was ready to try the slick tires but rain was estimated to come within two minutes.

The window was open just long enough for teams to come in for Ultrasofts to try and make a quick run before the rain came. Ferrari, Mercedes and Red Bull were the last to react to the change to Ultrasofts. Eventually they did change with just eight minutes left in the session.

Daniel Ricciardo was in trouble on the soft compounds and languishing in the knockout zone with just three minutes to go in the session. The times were tumbling as the track was improving as lightning and thunder was happening all around the circuit. Every lap was a quicker lap for every driver.

All cars were out early with Ferrari sending Vettel out on Intermediate tires and other teams on Ultrasofts. What seemingly was the wrong tire was actually the correct read as all the cars came back into the pits for Inters but Vettel read the tea leaves perfectly and have a clear track to make his initial run. A perfect call on Ferrari’s part for the start of Q2.

The rain continued with eleven minutes left in session and the track conditions were worsening. Kimi Raikkonen was last to change to Inters and it was really full-wet conditions at that point. With ten minutes left in the session, Vettel was the only person with a time set in Q2.

Lance Stroll ran off and lost his front wing. Raikkonen spun on Inters and Daniel Ricciardo was languishing in the knockout zone. The last five minutes left teams trying the full-wets to claw out of the bottom five. Both Toro Rosso’s into Q3 which was a nice result.

The cars lined up for the final session on full-wets with Toro Rosso and Red Bulls at the front of the line and the Hungarian crowd managing to do a crowd wave despite the rain. The conditions were very challenging with spots of rain all around the track.

Mercedes needed some help and the rain may have delivered with Hamilton and Bottas setting initial top two with Raikkonen in third and Vettel in fourth. That was reversed when Raikkonen made another run and took provisional pole with 3:47s left in the session.

In the end, Mercedes needed help and the rain was exactly what they needed and combined that element with terrific performances from Bottas and Hamilton. Lewis threw down a terrific last lap and took pole position with his teammate in tow. Ferraris slotted in third and fourth with Raikkonen leading Vettel. 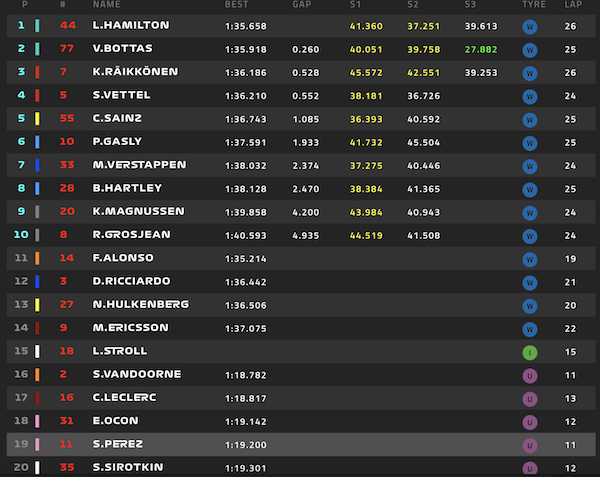 Ok, with the starting order as is, and the Ferrari having a clear starting line advantage, here is the ‘way out there’ prediction;

talking point for next week… how can Bottas only get a 5/10 sec penalty for taking out both Vettel and Räikkönen in turn 1….

Quote of the week… Vettel: we see how the Merc tactics are playing out….

Who wants to wager?

Should be an interesting start!

I’d never bet against a sure thing like that SubC.
But I’ll add to your prediction, we’ll be talking about how those Honda powered Toro Rosso’s smoked the Renault powered cars off the track, and how they might have finished top 5, if only Ver-crash-en hadn’t wiped them both out in Turn 1

Yayyy for Ver-crash-en!
It was only a cameo performance from the young Dutchman, because of the gearbox failure, but he managed to give Sainz a healthy clatter on the way past. Beautiful work.

Great prediction SubC, Bottas gave it a very good try on Vettel towards the end of the race, then tried to improve his technique on Ricciardo a couple of laps later.
To quote a very tall Austrian, “It is a lot of constructors’ [championship] points. In [technical director] James Allison’s words, ‘do you think it is deliberate or incompetence?’, so this leaves us with a judgement.” ;-)

I’m picking that where we’re seeing the cars qualifying two by two (,i.e Mercedes, Ferrari, Toro Rosso, Haas, Force India) that indicates the relative performance of the cars in those conditions, with both drivers able to extract close to the maximum performance. Where we’re seeing big gaps between the cars in a team, i.e Sainz over Hulk, Stroll over Sirotkin, Alonso over VanD, and (it pains me to say) Verstappen over Ricciardo, that indicates either the faster driver has done something special, or the slower driver has had a problem (maybe thats what happened to Danny Ric). It was an… Read more »

I’ve just watched the F2 feature race. That went from so wet that they were track drying behind the safety car on full wets, to a near dry circuit. The race was spectacular, very close, extremely skillful, with the drivers reacting to the changing conditions to extract the maximum from their cars, brilliant! The F3 race is on now, and its also tighter than a tight thing. Since the only difference between the cars is set up, and the driver, and the cars are open wheel V8 powered, with aero set up to allow close following and racing, I’ll repeat… Read more »