The Belgian Grand Prix was predicted to be a Mercedes-favoring affair as many expected the power unit in the back of their car to be the favorite and this is, after all, the longest circuit on the calendar and very reliant on power.

The practice sessions see-sawed between Ferrari and Mercedes with Lewis Hamilton looking very quick but the Ferrari’s not far off the mark. As the drivers headed into the final session and the final runs in Q3, there was two minutes to play and it was just three tenths of a second between Hamilton and Kimi Raikkonen.

Kimi aborted his final lap due to vibrations but Lewis improved his with a pole-winning lap and equaled Michael Schumacher for all-time pole positions in the process. He turned the fastest lap eve on the famous Spa Francorchamps circuit as well.

Ferrari’s Sebastian Vettel managed a nice lap slotting between the Mercedes of Hamilton and Valtteri Bottas for second. Ross Brawn delivered a personal message from the Schumacher family and clearly that brought tears to his eyes having achieved such a great record. 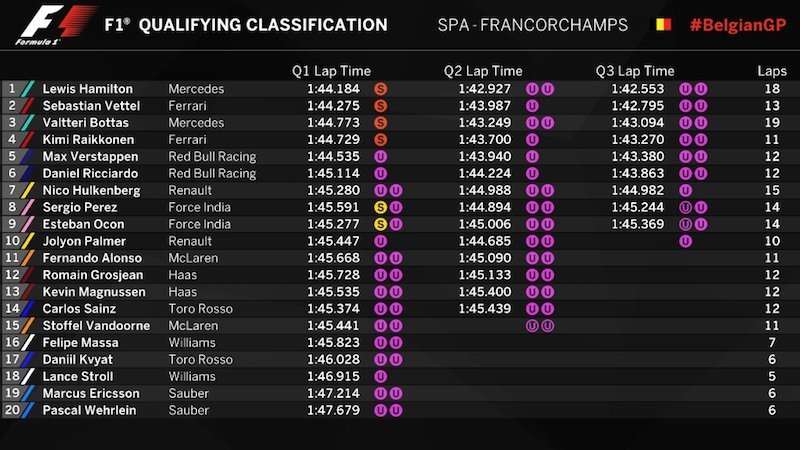 The magic moment was a highlight but it overshadowed what could be an interesting race given Ferrari’s race pace and just two tenths separating first and second. If Ferrari doesn’t find the race pace, two tenths adds up over such a long lap so Ferrari will have to dig deep on Sunday.

I haven’t seen any of the FP sessions or quali.
What was the nature of the vibrations that affected Kimi’s final run? Tyres or power unit? It seemed that in FP1, and FP3 he was showing great pace.
What on earth is going on with the Williams? Even with Mercedes shove behind them they’re getting headed by everyone except Sauber.

Kimi’s final run was aborted because he once again Screwed-it up when it mattered after being the fastest all weekend up to that point. Those front pushers at SKY once again went at it again in the only way they know how to Entertain their followers, KIMI to them “don’t try make a f**king stupid story”. Apart from “congratulations to number 44 for matching Schumacher’s pole numbers, I am pretty confused, how was number 44 only 2 tenths in front of number 5 on a 7km long power track like SPA with a new engine “ICE, TURBO AND MGUH”. there… Read more »

From the horse’s mouth,
“I was lucky with Kimi who aborted the lap and he gave me a nice tow to get on to the front row.”

Or was that pushed out by Sky? I guess you stil have no link on the supposed mincemeat, lol. Shall we call bs then?

Delusional is an understatement with you.

Those famous speculators at SKY promptly turned it into “KIMI initiative” into a FERRARI team request to Kimi, that is why Kimi told them “don’t try make a f**ing stupid story” he should have added “you assholes”.

Stop trying to deflect. That came from Vettel’s own mouth.

Here it is again because it is clear that fanboyism has blinded you, “I was lucky with Kimi who aborted the lap and he gave me a nice tow to get on to the front row.” – Sebastian Vettel, Spa, August 26, 2017.

Indisputable facts seem foreign to you.

No, Kimi didn’t intentionally help Vettel but Seb admitted that he took advantage of the tow that Kimi provided unintentionally.

Indisputable and confirmed by Vettel himself. No need for the media to make things up like you usually do.

take your meds, try staying out of the sun so your head doesn’t hurt up to much.

Awww, it must have hurt your head that Sebastian Vettel himself confirmed that his front row start was due to a tow.

“I was lucky with Kimi who aborted the lap and he gave me a nice tow to get on to the front row.” – Sebastian Vettel.

We have one rule here, decorum & civility. That means no personal attacks. Disagree all you want but if you both don’t like that rule, I would appreciate your taking the personal attacks to another website or forum. Our community doesn’t want to always drag the sharing of ideas and opinions immediately into the mud with personal attacks.

Glad you’re sharing your thoughts but if you have to personally attack each other to do so, this may not be the website for you.

I completely agree and I apologize for my inappropriate replies but if you look at the history of his posts, even on this article alone, Salvu Borg has continually brought up my name or attention for his own trolling purposes. I brought this to your attention a few weeks ago and also apologized in advance for any offensive replies on my part. I really wanted this poster to stop bringing me into his conversation and alerted you the last time. Apologies if I brought disrepute to your blog.

No worries, I just want to keep it civil. I know we can all do better. It brings the entire site down when one person is continually acidic and engages in personal attacks. That needs to stop on our site and I am aware of the usual suspects. We all work hard to create a community of respect and a safe harbor for new and veteran fans alike and when one person acts as a blunt object, it spoils the experience for others and they cease to post and that is not what I want. I do understand your point.

Thanks NC. If you look at this poster’s history, it is mostly negative rants about the media, Hamilton and other posters. He often calls others fanboys for supporting a certain driver and always corrects other posters’ opinions, especially ones not aligned with his own. I only replied to him because this is the second time he has provoked me to reply even if I was not even part of the conversation. That is hardly what you would call civil and polite and I didn’t want him to get away with it just to prove the point that he is the… Read more »

do you want a tissue?.

Lol, see post below mine. That didn’t take long.

It is a heck of an achievement by Hamilton, 68 poles out of 200 races. A 1 in 3 record.
It does seem that Ferrari have done well to remain so competitive with Mercedes, given the pre-race expectations that Spa would heavily favour the Mercedes. And I read some promising comments that Ferrari’s ‘race pace’ runs were up to 0.5sec faster than Mercedes.
If Max Missile doesn’t take anyone out in the first lap, it should be an interesting race.

SPA pre-race expectations were build-up/pumped-up by the usual famous British base number 44 F1 fan clubs, read my comment about number 44 overheating his softer rubber inside one lap and were Mercedes are vulnerable.

That certainly looks like a resonant response on the Mercedes rear tyres. You certainly wouldn’t be running a pole lap if your rear tyres were doing that.
If that was happening to a number of cars in practice and quali, then the chances are it will happen to some during the race. That will create some passing opportunities, and maybe some damage to rear suspension.

When that resonant happened it was not a qualifying lap, that lap was promptly aborted because the tyres were rendered unsafe.

That resonant response didn’t seem to be a factor in the race, they must use a more conservative line in the race.

Although right after qualifying some started rubbishing Pirelli it had nothing to do with the tyre construction (the tyres themselves). It is something that the driver can control it and or the team can control it, the driver by lifting and or reducing throttle and the team by modifying torque maps. Although this exact tyre behavior have never been seen in F1 before it is a common thing in drag racing with slicks, also it was common in the 1970 on big engine sports car racing. In the USA they call it shake, the oscillation effect (WRAPPING) not only deforms… Read more »

Hummm, bigger wider rear tyres in 2017, ever more torquey p.u’s, stiffer tyre carcasses, bigger kerbs, it must be a perfect storm for Pirelli.
I’ve seen that ‘wrapping’ behaviour on drag race tyres, normally just as some part of the drive train breaks.
Its probably time to shift to low profile tyres, and let the teams design suspension into the cars instead of using tyres as the primary suspension element.