Hamilton leads the way in Australia for Free Practice 1 & 2

The season is under way! Formula 1’s 2017 season got off to a familiar start today as Lewis Hamilton set the pace in the first practice session. In fact, Mercedes managed to take the top two spots of the session with Lewis’s teammate, Valtterin Bottas, right behind him.

The Mercs were in the Ultra-soft tire compounds but no other team used the purple banded tires. While much of the talk was centered on Ferrari but it was the Red Bull’s of Daniel Ricciardo and Max Verstappen who followed Mercedes in the first session. Ferrari’s Kimi Raikkonen and Sebastian Vettel were 5th and 6th.

The second practice session picked up where the first left off. Lewis Hamilton set a blistering 1:23.620s and even ran over 20 laps on the Ultra-soft tire compound. Sebastian Vettel managed to get close to Hamilton but was still +0.547 and that brings back memories of 2016 as the delta often present week in and week out.

Most teams were using the Ultra-soft tires and ran long stints giving some consideration to not only Australia but perhaps typical two-stopper races as a one stop.

The Red Bull duo were in 5th and 6th, swapping places with both Ferrari’s from the first session although Vettel was able to split the Mercedes of Hamilton and Bottas who finished 3rd. 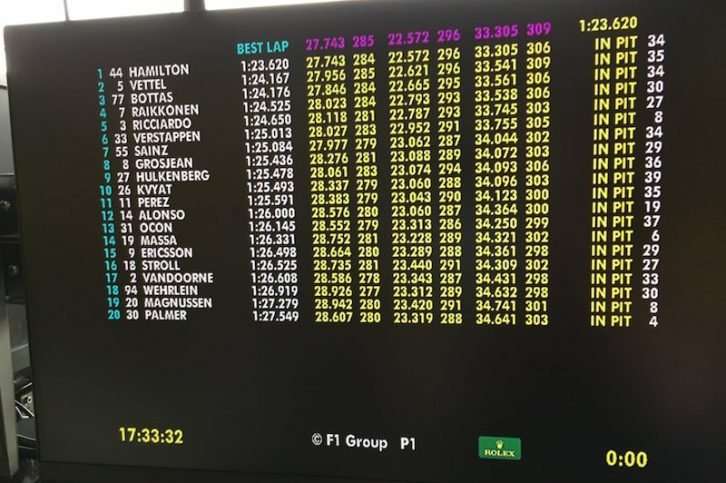 Renault’s Jolyon Palmer had a lurid crash under acceleration that ended his day while his teammate, Nico Hulkenberg, finished in 9th. Haas F1’s Romain Grosjean had a decent run to 8th and both Toro Rosso drivers were in the top ten as well.

McLaren managed 12th for Alonso and 17th for Vandoorne. Not a brilliant start to the weekend but at least they didn’t crahs or beach the car like Marcus Ericsson did in the final moments of the session.

It’s started! I’ve only seen FP2, but I think the cars look good, the low rear wing is quite striking, and I’m okay with the look of the shark fin. The new liveries look good, I really like the Renault colours, and the Williams looks great too. Pat Symonds is a great addition to the SKY F1 team, and Paul Di Resta is excellent on the driver assessment. And so far, it hasn’t been a Hamilton fancast, though there were a few moments……. Toto was looking very confident after FP2, which is concerning, given how well Mercedes are figuring so… Read more »

“so far it hasn’t been number 44 fancast’ that place is was and still is his number one fan club.

and pronto, right now just before qualifying starts those at his number one fan club just told their followers “Mercedes has been sand bagging in FP3”.

SKY got pretty Hamil-centric for a while, but for me, the home of the Hamilcast is BBC 5 live, and the JA on F1 website. Vomit inducing levels of favouritism there.
Thank you F1B for retaining balance :-)

When JA was on BBC he use to salivate at the mouth when talking about number 44.

What I’ve learned so far:

1. Hamilton is the man to beat.
2. Ferrari is right there.
3. Bottas has serious pace.

Do you think Hamilton got his five mechanics back?

I have no idea. Whatever he has right now…it’s working.

I’m just getting a few ‘conspiracy’ comments in early.
I just hope he hasn’t got another batch of dud power units, and that ‘someone’ doesn’t want him to win this year.

this morning I kept an eye again on GIN’S BOOBS and sure as hell I seen her bouncing them like there was no tomorrow.

I was checking out her curvy sidepods in FP3, and thought she was very taut, the RBR front wing on the other hand!

I only watched FP1 via SkySports. Already, I noticed that FOM is now shooting the cars on track much tighter and closer, adding the illusion of speed(though the cars are faster). No more intentional framing of cars on track with one of the sport’s primary sponsors’ billboard in the background. Through some super slo-mo shots, those small t-wings and shark fins were bending and flexing. I fear they are not long for the sport.

Yes I too have seen both the Mercedes shark-fin and HAAS T-wings flexing , HAAS was the first I the first race weekend of the season to be ordered/asked to remove their T-wing because it was caught/recorded flexing on FIA monitors.
I kept a close eye on GIN’S boobs but haven’t seen them bouncing up and down yet, although I am sure that she can bounce them up and down when she wants too.

If you’re Sauber, probably have to :-(

This website uses cookies to improve your experience while you navigate through the website. Out of these, the cookies that are categorized as necessary are stored on your browser as they are essential for the working of basic functionalities of the website. We also use third-party cookies that help us analyze and understand how you use this website. These cookies will be stored in your browser only with your consent. You also have the option to opt-out of these cookies. But opting out of some of these cookies may affect your browsing experience.
Necessary Always Enabled
Necessary cookies are absolutely essential for the website to function properly. This category only includes cookies that ensures basic functionalities and security features of the website. These cookies do not store any personal information.
Non-necessary
Any cookies that may not be particularly necessary for the website to function and is used specifically to collect user personal data via analytics, ads, other embedded contents are termed as non-necessary cookies. It is mandatory to procure user consent prior to running these cookies on your website.
SAVE & ACCEPT
wpDiscuz
16
0
Would love your thoughts, please comment.x
()
x
| Reply
Comment Author Info
Report this comment