Qualifying started with an engine change for Valtteri Bottas ahead of FP3 and both Ferrari’s led the session so as the teams prepared to go for pole position, they did so with new upgrades across the grid. Sebastian Vettel also experienced a water leak that required a new power unit. This is the second of the four allowed for this season and you can see where each team stands right here.

The Spanish Grand Prix is the first race back in Europe and normally marks the arrival of significant chassis updates as well as all working components on an F1 car. The first four races expose weaknesses and reveal competitive strengths of their adversaries so in order to progress, teams are forced to engage in what we call the development war. The race itself will expose just how effective those upgrades will be.

An interesting part of this large upgrade is that some teams who were running competitively in the mid or higher part of the grid could suddenly struggle to continue doing so if they missed the upgrade target and competitors didn’t.

Intriguingly, the FIA agreed to extend the DRS zone in Spain in order to aid in overtaking after a processional Russian Grand Prix. I am sure they have done the math(s) but it seems to me an handy solution would be to retain the DRS zone but make the delta two seconds instead of one second meaning that cars following by 2s or less can use DRS. That would keep the DRS zone paint stripes but that’s just my hunch.

Vettel took to the track but experienced technical issues on his maiden run on the new power unit. He did set initial top time but was immediately eclipsed by Lewis Hamilton.

Haas F1’s Romain Grosjean spun on his first attempt and left it late with just two minutes left in Q1 to set P7 while his teammate, Kevin Magnussen, set P8.

Ericsson, Palmer, Stroll, Vandoorne and Kvyat were out in Q1. Hamilton, Raikkonen, Vettel, Bottas, Verstappen, Ricciardo, Grosjean, Ocon, Sainz, Magnussen, Perez, Alonso, Hulkenberg, Masssa and Wehrelin all made it through. A big achievement for Sauber and Pascal.

Teams started their initial runs on the Soft compounds which were to be the race-start tires. The key here was going to be saving as many soft compounds as you can for the race and a possible soft-soft-medium strategy.

Romain Grosjean ran wide on his final attempt putting him out in Q2 while Alonso went P10 but it was not to be for Magnussen, Sainz, Hulkenberg, Grosjean and Wehrlein. A very disappointing result for Renault who had both cars miss Q3 suggesting the new upgrades may not be flattering the Spanish circuit.

Initial runs placed both Mercedes at the top in the 1:19’s and the Ferrari just a few tenths behind them. The Red Bull’s followed Ferrari with over half a second between Verstappen and Ricciardo.

As NBC Sports broadcaster, Steve Matchett, rightly pointed out, the delta between Mercedes and Ferrari was down to the third sector with Hamilton having a four tenths advantage.

As the teams started their final runs with just 2:42 to play, it was McLaren and Force India out first to set their first times of the session.

Bottas and Hamilton led Vettel and Raikkonen for their final runs.

Mercedes held on to take pole for Lewis Hamilton and was the fifth year in a row that they’ve taken pole in Spain. Vettel was faster than anyone in sector one and two but it was that third sector that gave Mercedes the top spot.

It’s worth noting that McLaren and Fernando Alonso qualified in P7 for the very first time in 2017. 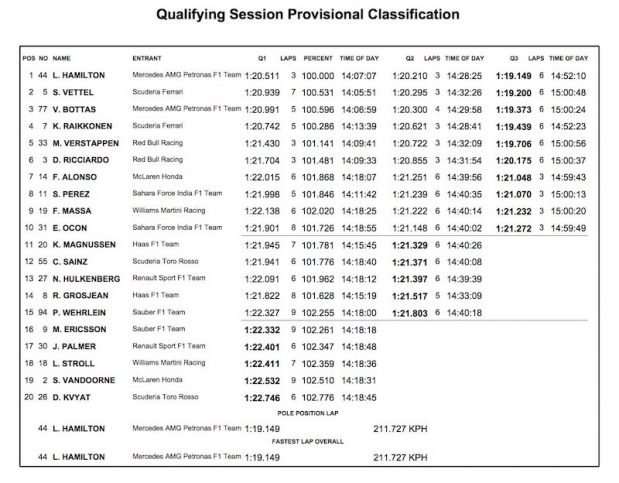 Something interesting to watch of which I have never seen before: “NUMBER 44 HEADBANGING IN THE COCKPIT”, this was captured both on track and in the pit-lane, just google it and click on item 4 from top (on track) and item 7 from top (in pit-lane).

I recall they mentioned that on the Sky commentary, it does look weird. Maybe getting psyched up for the lap?
I’ve experienced something similar on the ‘lethal weapon’ roller coaster ride at Movieworld in Queensland, it hurts your ears!

That was a really interesting FP3 and Qualifying. It’s obviously very difficult to get a really good lap around Barcelona, they’re pushing so hard that it’s easy to snatch a brake or have the car step out in ‘the traction zone’ (new SKY buzz phrase’. It’s really was has been a weekend where the work of the teams has been at the forefront, with McLaren, Mercedes and Ferrari teams all putting in huge efforts to change p.u’s between sessions, and all allowing their drivers to put in fantastic qualifying performances. The mid to backfield is amazingly tight on time, and… Read more »

Good morning from this end JAKO, Today senza technical problems, tyres and strategy are going to be the determining factors.

That proved to be a very good prediction Salvu, those three factors plus a first lap collision were the story of the race, well done.

While the ICE used by Vettel may be the original one, the rest of the power unit is significantly newer, even if not upgraded.
The performance difference between the two Mercedes either shows that the changes to their power unit were not aimed at increasing power, or Bottas is driving better than Hamilton. The team must have felt there was an advantage to introducing the second PU a race early, otherwise why do it?

What is concerning for the championship fight is that indicates that Vettel only has two working TC to last the rest of the season. This was the first time TC number 4 was used. Why assemble an old ICE with a new TC if one of the old TCs were still able to be used?

Well not having used more than one each of the 6 PU components for the first 5 races would have been the preferred way, so regardless of what FERRARI are saying there for sure must be some concern. The situation as is now that the “mix and match” has truly kicked in, the FIA RACE WEEKEND REPORT re the PU COMPONENTS USED SO FAR does not show what or which COMPONENT MIX is being actually used. BUT the information I have is that number 5 for qualifying reverted back to NUMBER 1 “PU” AS LAST RACED IN SOCHI.

Maybe as last raced in Sochi, but it include TC number 4 and MGU-H number 3 which were used for the first time. As the power unit they are referring to is only the ICE, TC, MGU-H and MGU-K, that’s half of the elements that are brand new. The ES and CE are not part of the same sub-assembly and so don’t need to be changed together.

The power unit as last raced in Sochi does not include TC NUMBER 4, TC number 4 was introduced on PU number 2.
PU number 1 (Sochi) includes TC number 3 and MGU-H number 3.
IF TC NUMBER 4 WAS RACED/USED IN SOCHI IT WOULD MEAN THAT BEFORE QUALIFYING A NEW ICE BUT WITH A RACE OLD TC (NUMBER 4) WAS MATCHED AND MIXED.
Aa I said, the FIA component use race repost will not shed any light on the mix and match being used.

No the FIA reports only tell you when the elements were first used. Technical Report Doc27 was issued at 14:03 on Saturday 13 May. http://www.fia.com/file/56876/download?token=x_KpGfK2 This state’s that Vettel has had a new TC and MGU-H fitted (number 4 & 3 respectively), and they will be used for the remainder of the event. As this report refers to the new PU elements fitted for qualifying, the change over of the power unit in Vettel’s car completed between FP 3 and qualifying was half old components and half brand new components. It is therefore wrong to refer to it as a… Read more »

So according to you what was described as a “miracle, time wise” between FP3 and qualifying (FERRARI NUMBER 5 POWER UNIT CHANGE) consisted of (build) a mix and match of old (1ST) ICE, OLD (3RD) MGU-H AND NEW (4TH), to mix and match those 4 components (fitting them together) and then replacing the power unit on the car must now be called a miracle of all miracles (time wise) job done.

No, the ICE, TC, MGU-H and MGU-K would have been built into a sub-assembly before the team arrived in Spain. This sub-assembly included ans ICE and MGU-K that had been used before, but new TC and MGU-H, as stated in the FIA report.

MIE, The information you have pushed forward is based on the FIA COMPONENT USE REPORT and that report is correct. what I was saying was that report does not show what is actually being used once the mix and match combination kicks in. I was also saying that according to the information I have for FP3 FERRARI used number 2 ICE, number 4 TC, and number 3 MGU-H. between FP3 and qualifying they noticed a water leak and they reverted back to the Sochi unit, ditto happened to Mercedes number 77.

The report you have for FP 3 must be in error then. The FIA report states that Vettel’s fourth TC and third MGU-H was used for the first time in qualifying.

Are any of the other F1Ber’s seeing the coverage of GP3, and Formula 2? I saw coverage of the F2 races at Bahrain, and now F2 and GP3 at Barcelona. It’s great racing, very close, in very quick cars, that can follow VERY closely, with brave young drivers who will try to pass anything anywhere anytime. They are spec series cars, so not as technically interesting as F1, but maybe L.M giving these series more coverage would satisfy the fans who just want to see ballsy close racing with n.a motors. Then we could have more techy coverage of the… Read more »