Hamilton on pole; Ferrari on rocks in Japan

Certainly the talk of Ferrari’s second FIA sensor, true or not, and the loss of straight-line speed, true or not, all came to a head on Saturday and some speculation from the broadcast team found Free Practice 3 a possible insight to a more competitive battle for pole position at the Japanese Grand Prix.

Would Mercedes and Lewis Hamilton claim another pole and display their dominance at Suzuka or could Ferrari’s pace be very track-centric? Lewis has only one pole at Suzuka and he got that last year so could Ferrari spring a surprise? The threat of rain, always a possibility at Suzuka, and the high wind could change things during qualifying.

With a massive effort from Renault to rebuild Nico Hulkenberg’s damage car for qualifying was a big ask of the team and they responded. Toro Rosso entered Q1 hoping they have solved the oscillation issue they’ve had from their new Honda engine all weekend long.

Ferrari’s Raikkonen and Vettel came out early and took the top two spots on their initial laps with Sebastian Vettel setting top time of 1:29.049s. Lewis started his first timed lap with 12:32s left in the session with lots of sparks flying from under his car and his foot down firmly. Lewis had purple 1st and 3rd secotrs for the top time at 1:28.702s nearly six tenths ahead of his teammate, Valtteri Bottas.

With 10 minutes to go, Vettel tried a second lap on the Supersoft tires but had a spin at turn 11 but righted his car to return to the pits but Sauber’s Marcus Ericsson put his car into the wall ending his session and record of never being outqualified but a teammate at Suzuka.

The session restarted with both Renaults waiting at pit exit for a green light to go. Hulkenberg and Sainz were harassed by McLaren’s Stoffel Vandoorne as the three tried to pas each other for the clean track in which to start their hot lap.

The Haas F1 cars and Force India cars were running close to each other in 6th, 8th, 9th and 10th and you could throw a blanket over their times in with 5:00 left in the session telegraphing a possible good scrap on Sunday between them. When the clock showed 3:00 left in the session, all the cars from 11th down came out to try to haul themselves into Q2. A major effort from Charles Leclerc in 6th and both Williams F1’s Lance Stroll managing to get into Q2.

Out in Q1- Hulkenberg (only the second time in 71 races), Ericsson, Alonso, Vandoorne, Sirotkin

Kimi set first time with a 1:28.595s but it was eclipsed by Hamilton who was then beaten by his teammate, Bottas, for the quick time. Vettel set the third fastest time just three tenths off Bottas but again, both Ferrari’s on Supersoft tires versus Mercedes on the harder Soft compound.

Daniel Ricicardo radioed a loss of power as he was being pushed into the garage and his teammate, Max Verstappen, set 5th fastest. Max has outqualified Dan in the last 10 races. Red Bull still struggling with balance and grip which the suffered from in all three practice sessions. Ricciardo screaming in his helmet and blowing out his vocal chords made for a very upset hoarse interview.

With 4:00 left in the session, both Toro Rosso’s, Haas cars, and Renault’s were all hunting time as light rain began to fall on portions of the track. Sauber’s Charles Leclerc spun and Sainz parked his car. Both Toro Rosso’s into Q3 and perhaps Honda solved their oscillation issues.

Ferraris’ came out on intermediate tires and as Vettel waited at the end of pit lane, he radioed that it may be too dry for the tires. Mercedes, reading the tea leaves, sent their cars out on the Supersoft tires. Both Ferrari’s immediately pit for Surpersoft tires.

Hamilton set provisional pole with a 1:27.760s with Bottas three tenths behind him. Raikkonen set 4th quickest time behind Max Verstappen in third. Vettel ran wide and blew the lap down in 9th place. Vettel continued for another shot on the Supersofts but aborted the lap while Mercedes pit quickly for a new set of Supersofts for a second run.

As Lewis and Valtteri set out for the second hot lap, the rain fell and scuttled the chances for Sebastian Vettel who will reflect on running wide at Spoon on his first run. Once again, Ferrari made errors off and on track and cost them harshly. 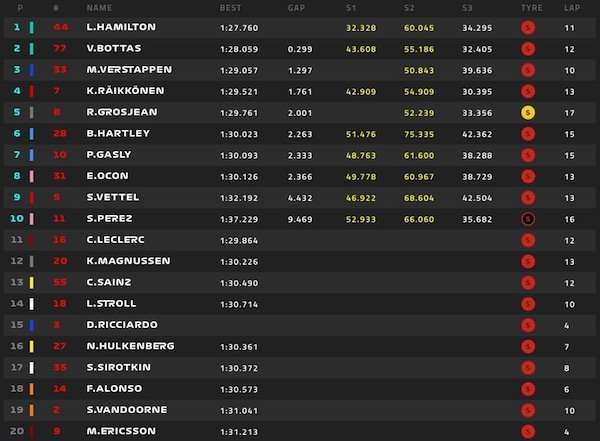