A wet morning for Free Practice 3 turned into a dry and sunny qualifying session. The question weighed like a two-ton heavy thing—who was going to be the fastest team? Had Red Bull leap-frogged Ferrari? Could either give Mercedes a challenge?

The qualifying session started with an automatic 3-place grid penalty for Red Bull’s Daniel Ricciardo so qualifying was critical if he had any hope of being the first Australian on the podium of the Australian Grand Prix.

Early running on Ultrasoft tire compounds found Ferrari’s Kimi Raikkonen leading in the first 10 minutes. With lots of traffic on the track, Lewis Hamilton was balked as was Sebastian Vettel. Lewis made a second run with 9 minutes left in the session and did claw his way up to 2nd just behind the flying Finn.

With just five minutes left, Lewis threw down another lap and took top spot by 3/10’s of a second. A great lap from Sauber’s Marcus Ericsson drew him up to 12th and made the Force India’s, as well as Haas team nervous, heading into their last runs. Hass driver Romain Grosjean answered with a run to 6th and his teammate, Kevin Magnussen, managing 8th. Force India narrowly made it in to Q2 which will be a big worry for the team who finished 4th in the constructor’s championship last year. Only Stroll’s Williams squeaked into Q2.

Red Bull’s Max Verstappen came out on his first run on the Supersoft tire compound instead of the Ultrasoft compounds. Perhaps red Bull may be playing the long game and betting on better tire performance and a longer first stint against Mercedes come race day. Max set a 1:22.830 while Raikkonen and Vettel were 4-3 tenths quicker. Hamilton’s first run was a real cracker taking the top spot by nearly half a second over Raikkonen’s Ferrari.

As the final runs in Q2 started, the dark grey clouds returned taking the track-heating sunshine with it. Both Red Bull’s stayed on the Supersoft compound for their final run meaning they would start the race on these compounds.

The Mercedes were nose-to-tail for their final run. Both Haas and both Renault’s made it through to Q3. A late lap from Vettel took top spot by a tenth over Hamilton and could signal that they are here to fight Mercedes.

Tragically both McLaren’s failed to make it through to Q3 and that won’t go over well with Fernando Alonso. The thought of battling Renault was the goal but being beat by both Haas cars has one wondering if the American team may be supplanting Force India as the best of the rest in 2018.

After setting a sub 1:22s lap, could Vettel claim pole? Was it time for Mercedes to use Hamilton’s “Party Mode”? Initial laps on Ultrasofts as the sun started to peak out.

A big crash from Valtteri Bottas in the exit of turn 2 brought out the red flag after hitting the wall and destroying the right side of his car in grand fashion. It wasn’t a good start for Bottas who needs to raise his game but the crash could mean a new gearbox, engine or other issues that may have a knock-on effect.

Mercedes will start on the back foot as far as team points go for Sunday’s race and Lewis will have a lot of weight on his shoulders. Team boss Toto Wolff did not look pleased with the incident. A lot of work for the team to get a car ready for Valtteri on Sunday. It must be said that the marshals did a great job of quickly removing the stricken Mercedes and all the debris to get the session back under way.

With 9:47s left, the cars rolled out for their final runs. Lewis started his run with a run to the top. Vettel was setting purple sectors but missed the top by 3/100’s of a second. Verstappen managed to squeeze between the Ferraris in 3rd. The top three cars (Hamilton, Vettel Verstappen) were separated by 6/100’s of a second.

With 3 minutes left, Haas and the Renault’s went out for their only run in Q3. Lewis went out with 2:30s left followed by the Ferraris. Ferrari haven’t been on pole for the first race of the season since 2007.

Lewis threw down a lap record to take pole position over Raikkonen and Vettel with Verstappen 4th followed by his teammate, Ricciardo in 5th. Both Haas F1 cars finished in 6th and 7th ahead of the Renaults which bodes well for the American team. From Kimi’s perspective, he was looking good in qualifying for all three sessions and will start ahead of Vettel. 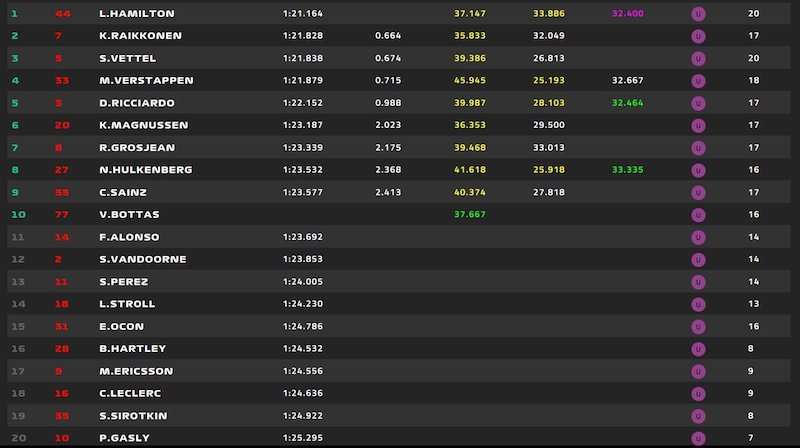 People out to stop peddling that a driver can “take a new engine”, this is the first race of the season, each driver has been allocated 3 engines for the season, unless all those 3 engines are “consumed” there will be no new engine, (unless the engine has been proved to have been damaged due to the accident) or putting it in another way, the 4TH engine can only be made used off after the 3 allocated engine has been used. If Bottas takes a new gearbox he will not gain anything (number of races wise on that gearbox). If… Read more »

Impressive showing from Haas, hopefully they can consistently score in the points this year. They need to make hay while the sun shines, the cloud cover will increase as the development wars get underway.

I’ve never been a huge Hamilton fan but his attitude after qualifying seemed different, he seems totally in control. It’s a good look for him.

I’m not sure if ESPN’s coverage includes the F1 show on Sky but this week had a few genuine side splitting moments between Max and Daniel, good stuff.

As I hinted yesterday in (what did we learn from FP1 & 2) page, fingers are now openly being pointed at HAAS surprisingly fast 2018 car as being a FERRARI replica, the aim of these finger pointing is for the rules to be revisited as to what the said rules allows a team to buy and use from a manufacturer. What HAAS is doing is all legal as per the rules and that stayed OK as long as HAAS wasn’t beating those that are now starting to point fingers for the rules to be revised.

The key, for me, is if Haas can keep keep up with the others in the development war over the balance of the season. They look to be starting out great but can they fund the kind of development it requires to stay on top? Force India seemed to manage it but they had a different approach to their chassis development timing. Let’s hope they can.

regardless, I think the mid-field battle may be as good as the one for the title if they are this close and McLaren get their issues dealt with.

Mercedes confirmed Bottas will drop from 10 to 15 on the starting grid, an additional 5 place grid penalty for a gearbox change.

Later on after it was announced that 77 will take a 5 place grid penalty for taking on a new gearbox. The FIA technical delegate confirmed that car 77 has taken on new ES and CE out of the 2 of these power unit elements that are allowed for the season with no further action/penalty. both elements can be reused again if found not to be damaged by Mercedes.

FERRARI notes from Melbourne. “Although Melbourne is notoriously unpredictable when it comes to weather rain is not expected for the race”.

Edit: Two take-aways for me are, 1) who still wants that Honda engine? 2) T-wings are back!

Looks like Bottas will take a 5 place grid penalty for fitting a new gearbox. The impact was 27G and from the video the gearbox would have taken a lot if not most of that.

Although “gearbox ratios” (8 forward and 1 revers) are fixed ratios for the season by the rules, teams may change these gears and dog-rings at any time during an event provided that the FIA technical delegate is satisfied that there is physical damage to the parts in question. So that tells us that when a so called “gearbox” is changed after an accident (1) either the “transmission” casing has sustained damage or (2) internal parts (gears/bearings) in the differential part of the “transmission” and of which are not allowed to be replaced before 5 race weekends use have been damaged.

Not super excited with the coverage changes. If I can understand tires in F1 and the depths of squalid hell that is the penaty system, I don’t need the graphics package to talk down to me.

Good quali through. No great revelation or ambushes, but an enjoyable start to the season.