Heading in to qualifying for the Formula 1 United States Grand Prix wasn’t going to work out the best for Ferrari and Sebastian Vettel as he entered the session with a 3-place grid penalty meaning he would start no better than 4th and this is a weekend where his rival, Lewis Hamilton, could secure his fifth title if he beats the German by eight points.

The only dry session this weekend has offered was Free Practice 3 and the teams has precious little time to dial in their setups so qualifying may have been a bit of an opportunity for several mid-field teams.

Teams were slightly reticent in coming out with the Toro Rosso’s first on the track. They would start at the back of the grid as Honda brought new upgrades meaning they would suffered engine change penalties.

On initial runs, Ferrari saw Vettel lead teammate, Kimi Raikkonen, at the top of the chart while Lewis Hamilton and Valtteri Bottas came out with 12 minutes left in the session for their first runs. The Red Bulls were on their initial runs as well . Most of the team had not set an initial lap time with just nine minutes left.

For the best of the rest, the battle between Renault, Force India and Haas was on and with six minutes to go, it was Grosjean, up to 6th leading Ricciardo, Sainz, Gasly, Perez and Hulkenberg.

After Max Verstappen set his timed lap, he had a broken suspension after hitting a yellow sausage curb and limped back to the pits. By the onboard sound, it did seem as if he had terminal damage and possible driveshaft issues but could the team get Max out in Q2?

Ferrari came out straight away on a split tire strategy having Raikkonen on the Ultrasoft tires. Vettel was on the Supersoft tire. Mercedes were on Supersoft tires as well. Red Bull’s Max Verstappen was done for the day as the team couldn’t repair the damage in time for Q2.

Bottas led Hamilton on their initial runs with Raikkonen jumping both to set top time. Vettel jumped both Mercs as well to have Ferrari 1, 2 while Lewis Hamilton had a brief lockup and the team radioed for a second lap. Lewis’s second attempt put him into 3rd place but it does mean his tires will have more mileage laps on them at the start of the race on Sunday.

Sauber’s Charles Leclerc was running 6th behind Daniel Ricciardo and ahead of Haas F1’s Romain Grosjean. Could Sauber mix things up for best of the rest? Toro Rosso’s Brendon Hartley and Pierre Gasly were still running trying to set lap times in Q2 despite their engine change penalties that are looming.

The session started with Mercedes straight out on track followed by Ferrari. All on Ultrasoft tires and running for pole position. Q2 suggested that perhaps the new floor on the Ferrari may have added some pace for the COTA track even though Mercedes led the practice session on Friday.

Bottas set provisional pole with a track record only the be eclipsed by Hamilton with Raikkonen in third and Vettel slotting into second ahead of Bottas. Vettel needs to have his teammate Kimi higher up the order to create a buffer and cover the Mercedes duo. Unfortunately for Kimi, both Mercedes had him covered on initial timed laps.

Ricciardo set 5th fastest on his first flying run and Romain Grosjean in 6th for Haas at their home grand prix. Romain was just a tenth ahead of Renault’s Nico Hulkenberg. Both Force India’s ahead of the Sauber of Charles Leclerc.

Kimi has started in the top 6 at every race this season but he needed to be on the front row in Austin to help Vettel. With one minute left, the cars all started their final laps.

Raikkonen set provisional pole only to be pipped by Hamilton with a lap record and Vettel could only manage second quickest meaning he would start the race in 5th place due to grid penalties. Lewis secured pole position for the US Grand Prix. 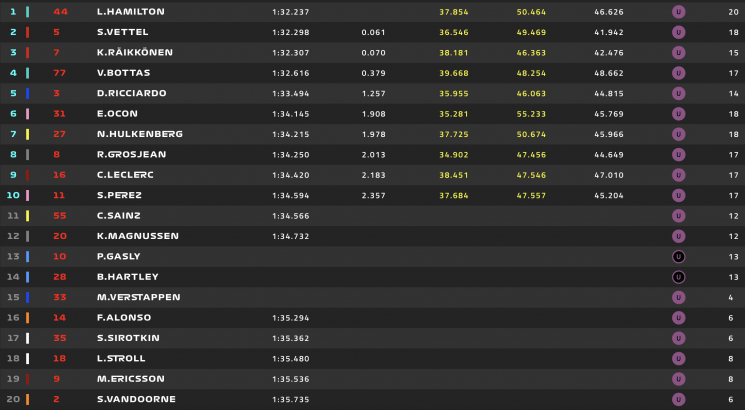 Boy there’s something about that picture that captures a lot of what’s distasteful about F1, huh? A tiny millionaire rolls around on a child’s toy (you can almost hear him going ‘wheeeee!’) and forces his sex worker – the only one in the world shorter than him, to protect his even tinier ego – to struggle to keep up on foot on her miniscule legs. Eww. Oh, sorry – his ‘trainer’. How would you like to be Vettel and know this guy owns you?